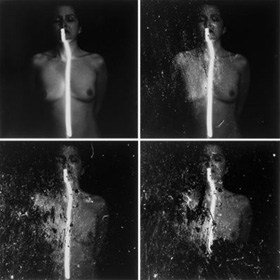 The thing about not being entirely sure about what just happened in a show you’ve come out of and need to write a review for is that, in one sense, it doesn’t really matter. I’m hardly likely to stick spoilers in if I don’t even know the full significance of what went on, or how it’s all supposed to fit together. For one thing, Sarah Kane’s stage directions for Cleansed make clear the scenes take place within the grounds of a university campus; I’d never have guessed that from the set as presented here, which never really changes. It is as if everything takes place in one room – again, the script begs to differ, and had this production stayed even a little more faithful to the original instructions, it would have come across as infinitely more coherent.

Anyway, I turn quickly to the apparent provocative nature of this play, because (at the time of writing) it’s been widely reported that a number of audience members throughout this run at the National Theatre have felt it necessary to leave, because of some very graphic content. The squeamish should not, alas, read on: the stage does rather become Dismemberment Central. I’m the sort of person that becomes very aware of my external surroundings whenever things get as relentlessly tortuous as this.

The sort of thoughts that rush through my mind go something like this. “I’m at the NT. This is a play. A play at the NT. At some point the lights will come up, the characters will all come out and take a bow, all bodily parts firmly in place. We will then get up, collect bags and coats from the cloakroom, use the loo if we need to, and amble over back to Waterloo Station, and then home.”

So yes, I lasted the course. There seemed to be even more nudity than blood. The show being without an interval, ‘relations’ are always over implausibly quickly. I shouldn’t have laughed, really, given a) more unconsented sex was depicted than consented relations, and b) the gruesomeness of what’s happening to these characters, who are locked in some sort of bedlam, presumably having been certified under mental health legislation. But quite why they must be treated in this horrifying manner is never really explored, though I gather it must be some sort of metaphor for how society generally treats people who don’t conform to what is widely accepted to be ‘normal’ behaviour.

Tinker (Tom Mothersdale) is clearly homophobic. It’s Carl (Peter Hobday) and Rod (George Taylor), in a relationship, who suffer disproportionately out of all the characters. To put it simply, love very literally hurts; at least Woman (Natalie Klamar) feels no pain when the end comes for her. Robin (Matthew Tennyson) is forced to eat more chocolate than even Bruce in Matilda The Musical. Grace (a highly convincing Michelle Terry) is transformed into her brother Graham (Graham Butler, one of those actors that could be reading the phone book aloud and still be thoroughly engaging), who has also been dispatched into the afterlife. The bizarre operation that enables Grace’s sex-change was probably the most sensationalist scene of all for me. But, while there were people who walked out during the performance I attended, this seemed to be out of boredom rather than shock horror. The play is a slow burner, and its minimalist script means its silences, technically always fairly short, sometimes feel awkwardly long. So long that a few people decided they’d had enough.

Is Cleansed about love? I suppose that comes through occasionally, though the more distressing elements of the show swiftly crush and shred any semblance of positive feeling. All the abuse probably desensitised me to any sentiment that may have existed, and may well, ironically, have stopped me (and anyone else in the audience at this performance) from fainting. This is violent stuff, and though I remain quite clueless as to the plot, I still found the experience a compelling one, extremely well cast and thus extremely well-acted. Horrifyingly believable, I can’t honestly say I ‘enjoyed’ it: frankly, I didn’t. But this doesn’t mean this isn’t a good play.

One of Britain’s most influential playwrights, Sarah Kane (1971 – 99) receives her National Theatre debut in an unflinching new production by Katie Mitchell.

Contains graphic scenes of physical and sexual violence.
For more detailed information on content and suitability, please contact the Box Office on 020 7452 3000
Dorfman Theatre
Running time approx 1 hour 45 mins with no interval
booking to 5th May 2016

“The times they are a-changin'”, as Bob Dylan put it - and as a deceased woman’s grandson (Phillip Jones) returns home to attend the funeral, the … END_OF_DOCUMENT_TOKEN_TO_BE_REPLACED

It’s not often that the entertainment tastes of an intellectually snobby middle-aged woman and an action-mad 10-year-old boy align perfectly, but … END_OF_DOCUMENT_TOKEN_TO_BE_REPLACED

Notre Dame is the latest digital production by Threedumb Theatre, live-streamed from The Space in Canary Wharf, London and directed by Stephen Smith, … END_OF_DOCUMENT_TOKEN_TO_BE_REPLACED

Icarus has fallen, and Minos has her dead to rights in an open-shut court case, but perhaps another story might be found. An interesting premise, an … END_OF_DOCUMENT_TOKEN_TO_BE_REPLACED

The latest production at the intimate Finborough Theatre boasts a visually striking set designed by Sarah Beaton on a traverse stage, with the … END_OF_DOCUMENT_TOKEN_TO_BE_REPLACED