Howdy pardners, how y’all doing? It’s time to saddle up the old buckeroo and mosey on down to the Colab Tavern for a bit of immersive theatre called The West. 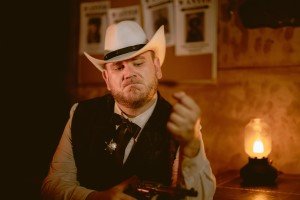 Welcome to Olverton, a small town in the old west which is trying to get itself back on its feet after being ravaged by sandstorms. Under the direction of Mayor Adelaide Olver (Grace Dunne), her husband and town sheriff Hank Olver (Owen Jenkins) and their son, and town preacher Francis (Sam Skoog) you will be turning your hand to cowboy life. But be warned, not all is as it seems and not everyone is necessarily a friend, and at some point, you may have to decide in which direction you want your life to go.

As you know, I am a massive fan of immersive theatre. The more I can forget the troubles of the world and lose myself mentally and physically in some other time or place, the happier I am. And by the end of The West I was definitely a happy punter. Once you enter the gates, after the obligatory H&S briefing – including learning the ‘safe word’ which is apparently well known in other situations as well – we entered the gates and left 21st Century Southwark for the rough and tumble of the old west. Within minutes, a few of us were whisked away by the preacher to go to church and cleanse ourselves of our sins. While we did this, other groups were starting their own adventures in different parts of the town. And there was a lot going on. Without giving too much away, in my time in Olverton, I tried to break up a marriage, canvassed a dog owning professor, had a park named after me, and found out very early on I’d not just lost my moral compass, but had buried it in the desert never to be seen again.

The West is a really fun filled production that gives its audience a great time. It could have had a very simple story but the writers – Bertie Watkins, Ben Chamberlain, Charlotte Potter, and The Company – have put together an engaging narrative that ensures everyone gets involved and makes the participants not only think about who they want to be but also question their understanding of reality. As with all immersive theatre, the more you participate the more you get out of the show, and the talented cast, including Chris Keegan in various roles, ensure there is always something to do. This includes exploring the set which makes full and novel use of the Colab Tavern location and is filled with the things you would expect to see in the old west. My one slight criticism is that the area in the basement could do with more lighting. Even with lamps, it was difficult to see some of the things we had to look at to make our plans.

Overall, there is nothing to criticise in the production itself. The cast have a total commitment to the story and really throw themselves into the production and ensure everyone gets involved. There are some set pieces moments which not only work well but allow the audience to make emotional connections with a family going through some major strife. I don’t particularly like intervals during an immersive theatre production, as I can sometimes break the fantasy, but the writers introduced it well, and it actually made sense to have a break when we did.

The West works as a solo or group event and I would recommend if there are a few of you then try and split up so you can compare adventures afterwards. It can get a little warm inside the building. On the evening I went, during the latest heatwave, it did get a little uncomfortable – no air conditioning in the old west – but in some respects that added to the effect of being in the USA on the edge of the desert.

Summing up, my companion and I thoroughly enjoyed our time in The West. While it felt a little crowded at times, as a piece of immersive theatre it is superbly written and played out by a very talented team and ultimately delivered everything I wanted and for around two hours, I was no longer mild-mannered Terry, the theatre reviewer. Instead I was one of those proud breed of pioneering people riding my horse, slinging my gun, and drinking moonshine (highly recommended) with the barkeep in the old saloon, and I loved it.

Opening this summer, The West is a free roam Immersive Theatre experience that invites you to step foot into a real Western experience. Will you become a gun-slinging outlaw or a law-abiding marshal as you build up your town and battle for control?

Turn your hand to classic cowboy tricks to earn your keep; gamble, prospect for gold, catch bandits, rob a bank, and play to win. But beware, for there is a traitor among us. The foes of the wilderness lie not just beyond the boundaries, but within… The Snakebite Bandit roams this saloon and could change your life forever.

Harold Shipman, known to his many patients, family and friends as ‘Fred’, was Britain’s worst serial killer. The official inquiry into his crimes … END_OF_DOCUMENT_TOKEN_TO_BE_REPLACED

Being one of Arthur Miller’s best-made and most challenging plays, The Crucible is also one of his most frequently performed. I was going to say … END_OF_DOCUMENT_TOKEN_TO_BE_REPLACED

To be fair, Linda Lavin called her concert Love Notes, there’s an album of the same name, and that’s more or less what it was about - variations on … END_OF_DOCUMENT_TOKEN_TO_BE_REPLACED

Noughts & Crosses is a euphemism for blacks and whites. The Noughts are the whites and the Crosses are the blacks. In the world of the play, the … END_OF_DOCUMENT_TOKEN_TO_BE_REPLACED

This ‘juke box’ musical offers highly polished, undemanding, feel-good entertainment, showcasing, as it does, 30 songs dating from the 1960s to the … END_OF_DOCUMENT_TOKEN_TO_BE_REPLACED