Southwark’s Colab Tavern specialises in presenting ‘immersive’ and ‘interactive’ theatre where the audience does not just hear and see the production, it actively takes part. Its mission is to “put audiences centre stage in fantastical worlds that allow them to tell the story for themselves”. The venue says that its shows are accessible to all, which is not quite true owing to the presence of unlit steps in the venue, which, at times, everyone has to use. 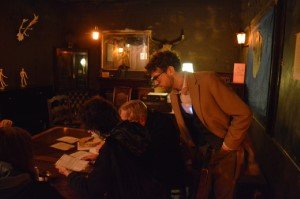 Come Bargain With Uncanny Things is advertised as an “interactive immersive opera” and I could, at this point, digress and discuss “what is opera?” Certainly, at the interval, members of the audience, which numbered about twelve, to whom I spoke, did not think that this presentation was an opera! The members of the cast did chant their lines, and the audience was encouraged to hum and sing but was this opera?

Virtually Opera – the presenters of this piece of theatre, say that they are a “fusion opera company, mixing opera with other forms as a conversation, not appropriation… (bringing) together artists and audiences from multiple forms as collaborators… (hoping) to make new kinds of ‘beautiful entertainment’.”

Come Bargain With Uncanny Things is about “how we relate to one another… it lets the audience take charge, deciding which problems to address and how”. As an example, one of the problems the audience was asked to solve was how to get the ‘Uncanny Thing’ to stop the trees dying in Southwark.

The author or ‘wordbuilder’ and director is Leo Doulton, who also plays The Uncanny Thing and attended a Britten-Pears Foundation Creative retreat in order to develop this presentation.

C N Lester is the Invoker and Guildmaster, who leads the proceedings – it was a great shame that they did not sing more.

Michelle Kelly as The Offerer and River seems also to be underused except for guiding the audience through its various tasks.

American Sarah Griffin (The Observer), whose circus skills include clowning and fire-breathing is also never allowed to develop a role, likewise Will Davies as The Wyrd Gazer. But all help with trying to immerse the members of the audience and encourage them to interact with what is going on, even if those in the audience may not understand!

The entire ground floor of Colab tavern is used during this ‘opera’, Charley Ipsen being responsible for the imaginative design which certainly aids the understanding of all those taking part.

It is a shame that, even though Erika Gundesen is listed as Music Director, there is so little real music in the piece apart from chanting.

Many of the tasks the audience is asked to undertake involve writing, as well as reading aloud from cards, which is well-nigh impossible owing to the dim orange ‘mood’ lighting, effective in creating the atmosphere. The piece would also benefit from being introduced more clearly by the cast as it certainly took me the first half hour to realise what was happening, and what was expected of me – and I know that others felt the same.

If what I have written whets your appetite for something unusual do give this most haunting piece of theatre a try – the venue is only five minutes walk from Borough Station. I enjoyed the experience.

The audience are members of a local community, gathered to face a range of problems. Guided by their bargainers (played by improvising singers), they have summoned a mystical Uncanny Thing. As fellow community members send in requests for help, the audience must decide who to help and how as they craft offerings, master rituals, compose invocations, and negotiate with the strange and powerful Uncanny Thing.

At its heart, Come Bargain With Uncanny Things is about how we relate to one another and the world around us. Using specially-created tools for improvising music around narratives drawing on contemporary opera, folk music, and ritual musics from around the world, it lets the audience take charge, deciding which problems to address and how. Drawing on Parabolic Theatre’s open-ended ‘adaptive narrative’ work in interactive theatre, the audience’s choices, from how they treat the Uncanny Thing to who they help, will make a different show each night.

Titus Andronicus is not usually a comedy, it is usually a bloody, villainous and vengeful tale, but tonight it is a comedy and a rather amusing one at … END_OF_DOCUMENT_TOKEN_TO_BE_REPLACED

This show is not without clichés - there are three of note in this production. Firstly, the French horn of the show’s title is personified, speaking … END_OF_DOCUMENT_TOKEN_TO_BE_REPLACED

There’s very little in the way of set in this show: aside from chairs, a few crash barriers and at one point, a red carpet, the actors’ movements … END_OF_DOCUMENT_TOKEN_TO_BE_REPLACED

South African born, but raised on the Isle of Man, Pierre Novellie is a true raconteur rather than just another 'stand-up' comedian. He says about his … END_OF_DOCUMENT_TOKEN_TO_BE_REPLACED

This show, Willy Hudson began by saying, is about himself. It is written by himself, is directed by himself and executive produced by himself. Almost … END_OF_DOCUMENT_TOKEN_TO_BE_REPLACED