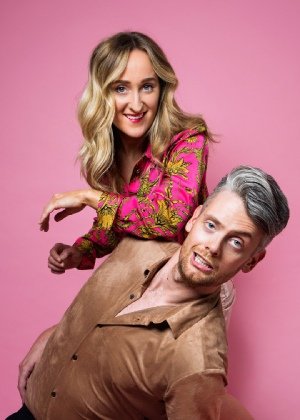 Beg, Borrow & Bitch is a work in progress. As such, many common teething issues were visible. At times the pair struggled with props, forgot lines and tripped over each other.

These are things that the two leads can easily refine as they become more familiar with their act. Abbie Murphy and Ricky Hunt as Cindy and Cassandra, hosts of America’s number one feminist shopping channel, bring chaotic energy and enthusiasm to their performance. The individual talent and collective chemistry is apparent and pleasing.

As a duo, their 80s-inspired routines and musical numbers entertained thanks to demonstrating the greatest polish and unity.

The problem for me was knowing what this show wanted to be. It’s billed as a comedy sketch show but it’s also trying to tell the story of the pair’s relationship when their show is cancelled (due to the rise of online shopping… in the 1980s?).

The story was confused with a lot of ideas packed into one hour. Hopefully, this was to test which bits worked and which didn’t. Some moments meandered and didn’t quite land. The segué from awkward-making audience participation to more fourth wall comic storytelling felt forced. Multiple storylines didn’t gel together, leaving me any the wiser. There were nice vehicles for song-and-dance vignettes and plenty of amusing bits of business but the smorgasbord of high camp theatricality needed to find coherence and purpose.

I did wonder why the hagsploitation pastiche needed to make the cis-woman the more villainously bitchy of the two as well as give her character financial stupidity? It didn’t serve much of a plot and wasn’t necessary to get the pair into their final catchy routine. Where both characters equally two-faced? How much modern comic value is there in women cat-fighting and being duplicitous? Being equally silly and denigrating doesn’t really shock because it’s an old trope. Nor does it ridicule perpetrators of stereotypes that this show relies on for its bread and butter. Was there a meta-point or just an opportunity to clown around and make a sight-gag given the amusing visual of towering Hunt next to ditty Murphy?

What is clear is that Hunt and Murphy have talent and their failing TV shopping channel concept has a lot of potential as a funny situation. If they can tighten up their show and are prepared to make some more considered choices – building out their song-and-dance routines and having even more fun with some of the strong visual gags (either as pure sketch or finding a coherent story that includes them) – this show might make some noise at Edinburgh but it still needs work.

Comedy sketch show Beg Borrow & Bitch sees the return of Cindy & Cassandra, co-hosts of America’s no.1 feminist shopping channel. After their hit show Two Faced Bitchin’ gets axed from the air, ego’s are bruised, fear sets in and the claws come out, but will these two work together or go it solo? The bitches descend into chaos to reclaim their fame and fortune – Think Love Island on steroids, or RuPaul’s Drag Race in the 1980s and you’re halfway there! Old fashioned British camp characters such as; Posh Foxes and Shady Lady Dinner Ladies clash with retro nostalgia combining all of Hunt & Murphy’s guilty pleasures.

They are two friends, who have known each other for too long.