Home » Reviews » Comedy » Review of Improvengers: Pretendgame at the Museum of Comedy 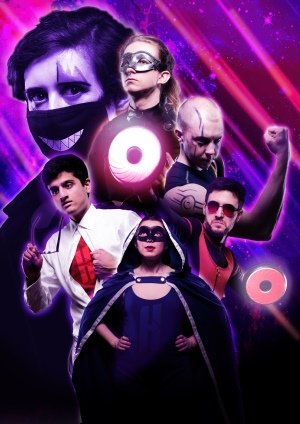 Following their epic success with fantasy show Lord of The Game Of The Ring Of Thrones, Hivemind are back – and this time they’re taking on the high-octane world of Superheroes.

The concept remains largely the same; the young cast courageously invite the happy, slightly tipsy audience to suggest a concept, and then, apparently undaunted by some rather unusual demands, they run with it. This, of course, means that each performance is completely original, and you could, if you wanted, go to see it several times without ever seeing the same show twice.

In our case, the story centred on a young man called Dave who, following an unfortunate incident with some electrodes, became Dave-Ja-Vu, a man with the power to travel back in time – but only by a few seconds.

With this kind of premise, you might suspect Hivemind of not taking the whole business very seriously – and you’d be absolutely right. Pretendgame has about as much in common with the Marvel Universe as SuperTed has with Superman (forgive the cross-pollination, there!), but that’s really not the point. The joy of the thing is to watch a little band of super-talented performers, armed only with some questionable costumes, a long-suffering pianist and a crash mat, indulge in mental and physical acrobatics as they attempt to keep up with each other and an ever more convoluted plot. Which, to their immense credit, they just about manage to do.

One of the best things about these shows is that the cast seem to be having almost as much fun as the audience – they obviously make each other laugh, and it’s great to see. Lines such as “I went to buy a house, but there was only one left in the shop, and it was really small” clearly test their composure to the utmost.

You create a superhero, and the “absolutely brilliant” Hivemind will create a fully improvised Marvel blockbuster full of dizzying action sequences, special effects, and live music. We may not have CGI, or a billion-dollar budget, but we do have…enthusiasm. And a heavy-duty crash mat.