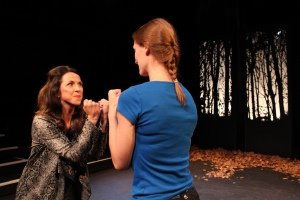 An impressive backdrop of trees, woodland and leaves dominates the rear of the stage of the Cockpit Theatre for this production of Moth Hunting – Greg Spong’s set design is on a par with the sort of scenery at somewhere like Chichester Festival Theatre or even the National. Gill (Verity Richards) is out in the woods with her two grown-up daughters, Ann (Charlotte Baker) and Sue (Kathryn McGarr). I couldn’t quite work out why they were there, apart from to fulfil Ann’s desire to identify various moth species. But Sue very much gives the impression that she’s being dragged along for a ride she’d rather not be a part of, and as the show progresses the sibling rivalry spills over into outright fighting.

The title of the play is, to be frank, somewhat dubious – no moths are hunted. ‘Moth hunting’ suggests (at least to me) that it’s the equivalent of ‘fox hunting’ – the term used in the show is ‘mothing’, which is mistakenly likened to ‘dogging’. Out of interest I had a look at what the National Trust has to say about mothing, and they suggest this: “You could go out into the garden with a torch at dusk and see which moths are feeding on your plants.” This is clearly insufficient for Ann, who for some reason didn’t explain to Sue beforehand what was involved, such that Sue is navigating the great outdoors wearing heels. The consequences are rather predictable.

The events of the narrative dictate that Ann leaves the patch of woodland in which the entire play is set for a time, allowing Gill and Sue to discuss matters between them without the other sibling being present. The same narrative device is used almost immediately thereafter when Sue goes off for a few minutes, and during both exchanges I couldn’t help questioning whether this is how women really communicate. It seemed to me that Phil Ball’s script was, fundamentally, a man’s presumption of how women would talk to one another, which isn’t quite the same thing. Without giving too much away, the conversation frequently returns to the subject of sexual conquests.

That said, the dialogue is far from naturalistic as it goes for a ‘dark comedy’ approach (it’s billed as ‘light-hearted’ but there’s nothing fluffy about many of the issues raised here). Sometimes what isn’t spoken about comes across as powerfully as what is – that the play doesn’t lay everything out in the open is indicative of a family that is reasonably close to one another, even if they are at loggerheads almost as often as they are in harmony. The audience must therefore work out what is really going on and ‘read’ between the lines, but the amount of work required is hardly taxing, such that the overall result is an engaging, if brief, evening.

The humour in the show came across to me as trying a tad too hard, though most of the audience evidently got some enjoyment from it. Completing the onstage characters is Sid (Gareth Turkington), Sue’s husband. While the play does well to steer away from the stereotype of older people being over the hill and away with the fairies – Gill more than holds her own with everyone else – Sue is only too happy to sponge off Sid’s not inconsiderable income without giving much in return, a point Sid finally realises. The play’s critical incident somewhat truncates the various discussions going on and dealing with what happened takes precedence over resolving outstanding issues. Not much of a satisfying ending, then, at least not in the conventional sense, but there’s a lot crammed into this single act production. Intriguing and watchable.

“TURN THAT LIGHT OUT!”
“Okay Ann, Jesus, it’s not the blitz!”
Ann has a surprise for her mum and sister – they’re going moth hunting in Macclesfield forest. Carrying only a homemade moth trap, corned beef sandwiches and a lifetime of resentment, tensions start to rise amongst the trees and wildlife as dark family secrets come to light. But will any moths?

Moth Hunting is a lighthearted, brand new comedy by Phil Ball. A perfect night out for anyone who has experienced sibling rivalry, the joyful embarrassment of parents or the endless struggle with brawling children. What started as a 10 minute piece at a new writing night has transformed into an exciting, thrilling and hilarious production. Budding Rose Productions has pulled together a fantastic creative crew and talented performers to bring this wild and hysterical play to the stage.