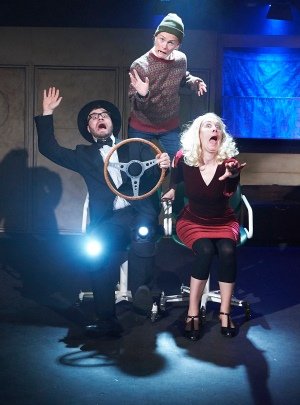 Feargus Woods Dunlop’s adaptation of Anthony Horowitz’s best-selling 1986 YA novel, The Falcon’s Malteser, has some highly entertaining staged pieces but, at 80+ minutes long, is guilty of being overly faithful to the novel and not going far enough to establish a theatrical life of its own. Four or five mad-capped chase scenes or slow-motion ultra-noir pastiches elicit wonderful guffaws from the juvenile members of the audience but, sadly, Dunlop has failed to commit the necessary double homicide against some of Horowitz’s literary darlings and his own thespian embellishments.

The play has a committed and talented cast who give energetic multi-role performances on a fun and versatile set (by Carl Davies) supported with some effective lighting design (by Jack Weir) at showcase moments of strong physical comedy. However, the script is simply 20 minutes too long – especially for a family-focused one-act (plus started nearly 10 minutes late which is lethal for a family matinee). The backstory about the Diamond parents being in Australia may give the superlative Fergus Leatham another chance to show off one of his convincing dialects and excellent physical embodiment of a sketch character, but adds nothing to the story but duration. Director Lee Lyford was not present at the post-performance Q&A but he and Associate Director Heather Westwell need to sit down with pencils poised and cut a good 20 pages from the script with or without Dunlop’s permission.

Likewise, even with a shorter and tighter script, Lyford needs to pick up the pace. Sound Designer James Nicholson has a big task as the MacGuffin is revealed largely aurally as is the central mystery’s resolution. The SFX are well composed and tight (and the show is called expertly from the booth) but Nicholson’s noir mood music becomes weighty and lengthy without changing the energy between scenes. His composition’s that nod heavily to Hutson and Hitchcock are faithfully evocative for a title track but belong as underscore and not repeatedly used for scene changes. Using typical noir underscore compositions between scenes is the audio equivalent of slow fades to and from black when the production is so much more entertaining and joyous when it rides on a screwball, more chaotic pace per the wackier and more satisfying moments of the show – such as a clever cleaver massacre in slow-motion in a sausage shop. (And of course noir, with its tight shots and shadows, is atmospheric but not slack or slow.)

Dunlop and Westwell, as the show’s producers, New Old Friends, demonstrate a passion for their craft and reverence for the original text. One can’t help but wonder if perhaps they held the original novel and the presence of Anthony Horowitz with just a little too much reverence?

Horowitz adapted his own 1986 novel into a screenplay for the 1988 film known as Just Ask For Diamond (Diamond’s Edge) which also clocked in at 1 hour, 23 minutes; a typical family feature-length but long for a family theatre production, especially without an interval. Much exposition in the play is done through soliloquy by Nick Diamond (Sian Eleanor Green). Although Green does a fine job in her monologues (as well as in her scenes), a disproportionate amount of her material is telling rather than showing. This adds even more flab to the pace and takes us away from the essence of theatre – especially comedy. If Dunlop and Lyford wanted to break the fourth wall as part of a hard-boiled noir send-up with these ‘voice-overs’, here would be one of the more appropriate places for Nicholson’s score (as under-score) whilst moving the action along (Weir could have gone to town with some projections whilst we’re at it!). Instead, the monologues just made a dialogue-heavy play even talkier. (Please note for the record, however, that John Hutson’s Maltese Falcon does not have a single voice-over whilst being deliriously faithful to Dashiell Hammett’s novel… so one wonders if Dunlop could have left the monologues out altogether?)

Just as I suspect Dunlop and Westwell were a little too in awe of Horowitz to take the text from page to stage effectively, I also wonder if they are just a little too passionate about the contribution of their near-rep group of actors. Stanislavski famously described art as ‘choice’. Dunlop and Westwell needed to be more decisive about whether they were producing a musical, a comedy, a stage version of a family film, an assembly of vaudeville acts or something else? And whatever the genre or genre-blend is: to what purpose and for whom? The occasional introduction of guitar-based explanatory ditties could be effective in holding the interest of a younger crowd but the random interval and less than committed nature of the musicality simply lacked coherence and thus diminished entertainment value whilst prolonging the pace. Where was Lyford’s direction here? If this play is to have strong musicality it needs a strong musical director which needs to be someone’s raison d’etre if not an actual day-job. The ad hoc, ‘lets-have-a-go’ inclusion of music was an ill-disciplined non-choice and should have been taken all the way to the rafters leading to a great sing-along finale or left on the cutting-room floor. Similarly, the almost-panto tongue-twister gag sequence about ‘stopping at the Sausage Shop’ stopped short and didn’t run head-long into the obvious comedy terrain for which it had momentum. Perhaps the sense of accomplishment in actors delivering more than 13 roles (really well!) clouded the necessary slavish devotion to tight story-telling and audience entertainment theatre requires. It felt as if a firmer directorial hand was needed throughout.

Nonetheless, the source material is compelling and funny, the cast is talented and there are some laugh-aloud hilarious bits that the kids love. This show is strong with even stronger potential if it meets some brutal editing and ruthless sacrifices to the gods of entertainment. The producers don’t need to seek Horowitz’s approval, they need to blow his – and the audience’s – minds. This play could be knock-down-hilarious with powerful physical (and possibly musical) comedy connecting with a clear and consistent tone of voice. For both Horowitz fans and others, this show is worth a look now but with some hard-cold choices on script, structure and pace, it could be transformed into a true crowd-pleasing classic.

The show introduces the Diamond Brothers Detective Agency. Tim is the world’s worst private investigator, so can the help of his clever younger brother Nick be enough to crack their toughest case yet? A solitary box of Maltesers is delivered by a miniature Mexican, but what’s so special about these chocolates that half of London’s criminal underworld are willing to kill for them?