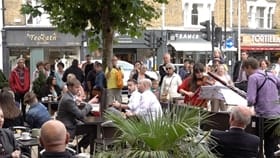 During the monsoon weather on Wednesday, I was worrying about today’s performance. This production of Cosi Fan Tutte is performed on the High Street almost entirely outdoors.

At 5pm on Thursday I am sitting outside Patisserie Valerie with my cappuccino in a takeaway cup ready for the action to begin. I know I’m in the right place as there is a violinist (Olivia Jarvis), bassoonist (Leo Geyer) and Accordionist (Bartosz Glowacki) sitting at the next table. It is more of a surprise when the three gentlemen enjoying a coffee on another table start singing at the top of their voices!

The three gentlemen are the cynical Don Alfonso (Philip Smith) who is plotting to ruin the happy lives of Ferrando (Simon Gfeller) and Guglielmo (Tom Stoddart). He bets them that their respective fiancées will not stay faithful if put to the test. They are so sure of their lover’s devotion to them that they accept the challenge. Some of the customers enjoying their afternoon coffees seem surprised to find themselves in the middle of an opera. I imagine the customers in Morrisons were even more so when Ferrando and Guglielmo meet their fiancées Fiordiligi (Claire wild) and Dorabella (Felicity Buckland) there and tell them they have to leave immediately for a lucrative contract in New York.

We next travel through the town for an emotional farewell at the station. I was hugely impressed with the musicians who walked along the streets playing their instruments negotiating pedestrians and crossing roads completely unfazed. It takes some very powerful singing to perform in a public place and not be drowned out by the sounds of traffic, buskers, and emergency sirens, but this group of singers, particularly Claire Wild, are more than capable.

At the Alexandra pub, the girls are accosted by two strangers, who try to seduce them, these are none other than their fiancées in disguise. They are offended and leave the young men at the pub and go to do some shopping in Ely’s department store. Don Alfonso tells them there is no harm in them having a bit of fun while their fiancées are away and the girls decide he may be right and return to the pub. After their initial reluctance, the girls decide to have a bit of fun with the strangers before Don Alfonso tells them their fiancées contract has been cancelled and they are returning.

This production is tremendous fun, it was most entertaining to watch passing members of the public catch sight of the proceedings and join the procession to watch the rest of the drama. The audience included several young children who were entertained throughout. Leo Geyer and Joanna Turner have done a wonderful job in creating a modern libretto and production suitable for this High Street Format Opera. I am quite certain that Mozart would
have thoroughly approved.

Following the success of the new Merton street opera Drifting Dragons last year, Mozart’s Cosi Fan Tutte is adapted for the high street. It’s a story about love and friendship, cheating, and testing the one you love. The performances are completely FREE and unticketed in a variety of town centre locations across our home borough of Merton – popping up in cafes, pubs, supermarkets, libraries and the bus stop. The performances give local people the chance to experience opera, who might not ordinarily do so, changing attitudes to the art form to encourage people to realise opera is not elitist, expensive, boring or irrelevant as often perceived. The modern re-imagining has been edited to about an hour, the music re-arranged for 3 instruments suitable for promenade performance by exciting young composer/conductor Leo Geyer, and with a new modern English libretto written by experienced young opera director Joanna Turner.

The cast includes Claire Wild as Fiordiligi and Philip Smith as Don Alfonso, both currently covering in Welsh National Opera’s The Merchant of Venice at the Royal Opera House. Claire returns to Welsh National Opera in Khovanshchina in the autumn. They are joined by Thomas Stoddart as Guglielmo and Felicity Buckland as Dorabella (both in Opera UpClose’s upcoming The Magic Flute) and Simon Gfeller as Ferrando (recent roles with English Touring Opera). They are accompanied by Olivia Jarvis on violin, Bartosz Glowacki on accordion and Leo Geyer on bassoon.

If the dialogue wasn’t quite so eclectic and engaging, I might have decided to attempt to have kept a tally of how many times a trestle table is … END_OF_DOCUMENT_TOKEN_TO_BE_REPLACED

Doctor Who: Time Fracture by Immersive Everywhere has plenty to exhilarate both avid and casual Doctor Who fans, delivering on its promise to let … END_OF_DOCUMENT_TOKEN_TO_BE_REPLACED

A brief review of a brief play. It is, as the Prime Minister (Lisa Day) observes, extremely unlikely that her ‘letter of last resort’ would ever … END_OF_DOCUMENT_TOKEN_TO_BE_REPLACED

It’s a production of Hamlet that starts at 7:30pm and manages to come down on the ‘right’ side of 10:30pm - the hardcore fans and followers of … END_OF_DOCUMENT_TOKEN_TO_BE_REPLACED

For seasoned theatregoers, this version of The Three Musketeers comes across as one of those shows that takes a similar format to something one has … END_OF_DOCUMENT_TOKEN_TO_BE_REPLACED