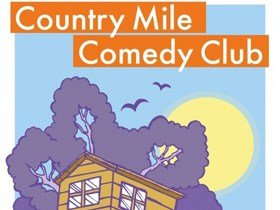 The Troubadour in Earls Court, the iconic fifties coffee house still going strong after sixty-two years, played host to the fledgling Country Mile Comedy Club for its first gig in support of the SHM Foundation, a charity one of whose current projects is combatting HIV in South Africa. Whilst retaining the meeting-place persona from its early Bohemian days the Troubadour has developed into a bigger restaurant and its intimate L-shaped basement is a cherished music venue which saw Dylan play his first London concert, Joni Mitchell grace the stage, whilst more recently Ed Sheeran, Morrissey and Hozier have wowed audiences.

The Comedy Club is hosted by Bec Hill who claims to be an Australian. (An Aussie? In Earls Court? What are the chances…?) Having had an extremely sheltered upbringing down there in Oz, Hill claims not to have come across the universal hand sign for “W*nker” until she came to Oz Court, sorry, Earls Court. She seems to have picked it up OK though and gave ample and vulgarly expressive demos of the hand gesture along with that for “D*ckhead” which, if you do with your right hand at the side of your head, means “Right D*ckhead”. I didn’t know that. You learn something every day.

Having got us to sing a silly song and insulted a few audience members because she could (studiously avoiding the press guy scribbling away, of course) Hill introduces the first act: Two Plus Ones. These three 21-year-old blokes who all still live at home according to their opening song are a kind of comedy-improv-sketch group though the improv bit is a misnomer as everything is well worked out, rehearsed and very funny. I suppose the occasional ad-lib might count as improv but really these are expertly-honed comedy sketches that, although they lean heavily on well-tried routines, have a spark of originality about them. The sax sketch, where one of them has to take back his singing wall-trout to the shop and gets a full-size manic sax-player instead which bursts into George-Michael-sax-break life at the use of the word sax – i.e Goldman Sacks, potato sacks and the like – is a great idea and shows off the skills of the tall gangly member of the troupe who’s facial expressions are reminiscent of the current spate of killer clowns. As soon as a saxophone comes into the mix we all, inevitably, expect a burst of Baker Street: the boys didn’t disappoint.

Act number two is a fat man who makes noises. I can use the word “fat”, despite PC concerns, because John Luke Roberts, or the Monarch as he likes to be known, isn’t really fat. He just has lots of balloons stuffed into his ill-fitting suit plus a comedy beard and vampire teeth that get spat out at the audience at one point. And I can use the word “noises” because, despite PC concerns, the noises are very loud and are made by a fat man which makes them funny. Well a little bit funny, anyway. Movement isn’t straightforward when you’ve got balloons stuffed down your pants and Roberts is a kind of cross between the Elephant Man and a three-wheeled Robo-Hummer. His venture into the audience (poor Adrian, we all felt for him) to tell people how they are going to die (chopped up by giant scissors at a supermarket opening seems a little far fetched – but we will see) suggests the word “macabre” might well have been invented for him. And I can use the word “macabre”, despite PC concerns, because the Monarch is a fat, noisy comedian who scares the sh*t out of you and is the type of comic who puts the “killer” into killer clowns.

The Pin is the third act of the evening and is another comedy-improv-sketch group – two-man this time – and once again the sketches are well-honed. Alex is the blond bombshell extravert who sneaks on before his partner Ben and sets up a little jape with the audience to play on Ben when he arrives. Ben is the introverted straight man. In fact, he’s so straight he wouldn’t recognise LGBT if it pulled up in a Limousine. I can say LGBT… Inevitably the ruse doesn’t work of course ’cos it was one they made earlier, but very droll never the less. Slight problem with straight Ben is that he has a very light voice. That’s PC-speak for we couldn’t hear him: I know it’s a small intimate space, Ben, but you have to speak up, man. Their take on the classic three-part sketch with only two performers – probably being seen in Music Halls when the Troubadour opened in the early ’fifties – is clever and funny and is reminiscent of Morecombe and Wise, who may be dead but one likes to think they are still performing those kind of routines somewhere in the ether. I’m sure if we asked the Monarch he’d know.

After the break and further banter from Bec Hill – this time centring on toilets which, as an Aussie, presumably she didn’t know existed until she came to London, we are entertained by Ben Pope, stand-up comedian. He has some good, fast patter and some excellent one-liners and keeps looking at his watch. Don’t know why and it doesn’t appear to distract him though it may well distract the audience. My theory is that instead of having either a joke list or notebook on stage (like the next act) he actually has an Apple watch which he uses as an aide memoir: instead of wearing his heart on his sleeve he wears his jokes on his wrist. Boom-boom. (It’s all right mate, you can have that one for free – I know you’re going to use it in your next set.) Because of his name he makes some good religious gags which for PC reasons I cannot repeat here or tell you which religion and his “milk” broadside is very witty: he keeps getting unrequested milk delivered to his house. There’s a bit of a theme going here because the quiet man in the Pin keeps getting wool delivered to his house because he’s a little boy who lives down the lane. There’s obviously a trope being engendered. I can use the word “trope”, despite PC concerns, because I’ve always wanted to use it and I’m not really sure I know what it means. Milk, wool – Bec Hill no doubt will be adding a skit where she keeps getting kangaroos delivered.

Headlining the night is Elf Lyons. Elf is a weirdo. She’s a funny weirdo but she’s definitely a weirdo. She won’t mind me saying that because you get the distinct impression that she actually thinks she’s a weirdo herself. She has a fine routine impersonating her posh Mum and she periodically dives into the aforementioned notebook to extract another comic gem. Her whole set is kind of like the Diary of a Weirdo and weirdest of all is her coveting of a penis. Which she would like to dip in yogurt. You’re with me now, no? Weirdo. And it’s not just any yogurt. Fruit Corners are out – it has to be Onken. Complete weirdo. It’s what Freud described as “penis-yogurt envy” and it’s put me off yogurt for life. If she was true to the Country Mile trope she’d be expecting deliveries of not just yoghurt… As a stand-up Elf makes the intriguing decision to dispense with the mike. We could hear her OK (unlike the Quiet Man) but stand-ups usually like to use the mike as a comfort blanket. But when you’re a weirdo you obviously don’t need a comfort blanket.

(I saw Adam Bloom in Edinburgh once, in a small room: he put the mike down and said “I don’t need that, do I?” and I said “What?” and got a big laugh. He wasn’t pleased. Best Heckle I’d ever done. Only heckle I’d ever done. Later on, he did the Rubik’s cube on stage. When finished I said “Why?” he said: “What are you, some kind of philosopher, or something?” What a weirdo.)

So a fascinating evening’s entertainment was rounded off by compere Bec Hill and a word from the representative of the SHM Foundation. Country Mile has a monthly slot at the Troubadour for charity: highly recommended.

To mark World Mental Health Day, Country Mile Comedy Club, fundraising for the SHM Foundation, presents a new night of cheap comedy from some of the brightest and best stand-up and sketch comedians around, headlined by stand-up Elf Lyons (Media Eye Rising Star 2016). Our MC for the night is Bec Hill (one of Time Out and The Telegraph’s Top 10 Comedians to Follow on Twitter), and joining them on the bill are sketch duo The Pin, performing material in preparation for the upcoming third series of their BBC Radio 4 show, stand-ups Catherine Bohart (BBC New Comedy Award 2016 Finalist and Funny Women 2016 Awards Grand Finalist), and Sarah Keyworth (Funny Women Awards 2015 First Runner Up), and sketch triangle Two Plus Ones, fresh from their Edinburgh Fringe debut ‘Mothers’.

The Country Mile Comedy Club is fundraising for the SHM Foundation, a charity which works globally to bring about positive social change through projects in the areas of learning and citizenship, health and the arts. They are currently working in South Africa, to provide mental health support services to adolescents living with HIV/AIDS. In South Africa, approximately 15% of adolescents have HIV. The experience of social stigma and isolation for Adolescents Living with HIV/AIDS is very common, and it is very difficult to access psychological support. Hence, the SHM Foundation has developed a model that provides psychosocial support to HIV positive adolescents through mobile phone text message support groups – Project Khuluma. All proceeds go to the charity, and with a bucket at the end of the show for donations.
https://troubadourlondon.yapsody.com/

Britain, so a London cab driver once told me, is obsessed with the Second World War, as though it happened just recently. Power Luncheon would seem, … END_OF_DOCUMENT_TOKEN_TO_BE_REPLACED

William J Dunleavy, author and star of this monologue play, is a writer and face to watch. He enters the room (as the staging is more geared towards … END_OF_DOCUMENT_TOKEN_TO_BE_REPLACED

Cirque du Soleil’s Luzia is a joyful whirl through a psychedelic Mexico, which reminds us why live theatre is so special. Anyone who goes to … END_OF_DOCUMENT_TOKEN_TO_BE_REPLACED

I am always very excited to come across a new theatre, and Esher Theatre is a real ‘find’, conveniently situated near to Esher High Street and right … END_OF_DOCUMENT_TOKEN_TO_BE_REPLACED

Cecil Sharp is no unsung hero. Without the energy of this driven and at times prickly musician, the traditional folksong of rural England would very … END_OF_DOCUMENT_TOKEN_TO_BE_REPLACED