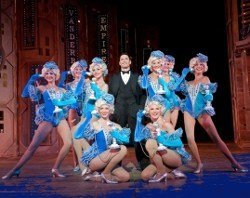 After a successful run at Regent’s Park Open Air Theatre, Crazy For You has made its West End transfer to the Novello Theatre, and quite frankly, who could ask for anything more?

God bless such a musical that ensures every single patron sways their way out of the Novello, exiting as a youngster once again no matter what their age; simple, traditional magic at its best! Sure, it is evidently a musical plucked straight out of its time, the pre-Sondheim separation between song and dance is more than apparent. But that’s okay, it’s more than okay. Long gone are the days we desire to revisit, long gone are the days of sheer fun George and Ira Gershwin introduced to the world. Yet, here is the invitation to lose ourselves in the magic once more, and to resist a constant grin was pure torture.

The genius that is Ken Ludwig is responsible for thankfully re-adapting the original book with a pinch (okay, maybe a handful) of Gershwin, and a sprinkle of showbiz. We follow the story of the adorable, tap dancing Bobby Child (Sean Palmer), son to an unbearably wealthy family in which he wishes to escape by helplessly auditioning for the dismissive Bela Zangler (David Burt). Failing, his mother proposes that he take a business trip a far cry from home to Deadrock, Nevada to seal the deal on a property. With the added bonus of escaping an unwanted fiancé, he of course accepts. A few days later a rather sun-stroked, thirsty Bobby arrives at our lovable bad guy Lank Hawkins’ (Michael McKell) saloon, only to find he has to close the deal on a relatively run down Gaiety Theatre. He of course falls madly in love with the owner’s daughter Polly Baker (Clare Foster), the seemingly only female this simple town inhabits. Failing (again) to fully win her heart, he is struck by a not so bright idea. Gathering his fellow New York Follies he sticks on a beard, adopts a Hungarian accent therefore fooling the town to believe he is the one and only Bela Zangler, all in the name of saving the theatre, hurrah! Well, not quite…

What seems to be your average once upon a time, soon turns into something quite special. A promise is a promise, and you are guaranteed to fall hopelessly in love with each and every character. Every clap of the hand is full of rejoice due to a simplistic happiness that fills the soul. Old fashioned humour is cleverly reminded throughout but what gladly hits the spot are those great, big bursts of choreography that truly knock your socks off and replaces them with invisible tap shoes. These big dancing numbers such as the likes of ‘I Got Rhythm’ are a result of the talented Stephen Mear, a man with an obvious mission to lift backsides off seats in a rhythmic fashion; mission accomplished.

An exquisite quality is danced by both our leading roles with equally beautiful voices; a match made in heaven. It can be quite uncommon to describe an ensemble as striking as our leading pair, but difficulty in doing so undeniably lacked this time. Dreams are realised in an array of sweet hearted relationships throughout a glitzy 1930’s fairytale, and this lovable narrative partnered with Gershwin classics touches the heart, lifting spirits you’d perhaps long ago forgotten about. If it is not worth witnessing this sweet spectacle for the fairy dust that trails behind you on your way home to reality alone, then it is certainly worth it if only for the hilarity that is Zangler and Child’s drunken duet – understated comic moment of the year!

The album for this show, I Could Use A Drink, was released in 2013 but there were nonetheless moments when it felt very much like the show was written … END_OF_DOCUMENT_TOKEN_TO_BE_REPLACED

It’s easy enough to get immersed into a production like this. Even in its concert format, there’s something compelling about the way in which the … END_OF_DOCUMENT_TOKEN_TO_BE_REPLACED

I wouldn’t exactly say Ben Forster appearing as himself in this musical comedy is a career highlight (he is, after all, someone who has played the … END_OF_DOCUMENT_TOKEN_TO_BE_REPLACED

It’s an intricate plot, laced with some subversive humour - that the female character is simply called ‘The Woman’ (Molly Lynch), for instance, is … END_OF_DOCUMENT_TOKEN_TO_BE_REPLACED

Andrea McArdle didn’t, when the 1978 movie Rainbow was released, look or sound like Judy Garland, and she still doesn’t. You’d be forgiven for … END_OF_DOCUMENT_TOKEN_TO_BE_REPLACED