Home » Reviews » Crossing at the Hen and Chickens Theatre 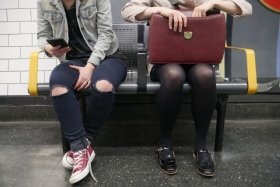 London is full of millions of people, and we’re all squished together like sardines in tins on the underground. Who are these people, what are their stories? The writers of Crossing take a tube carriage of people and try to tell some of those stories.

We start overhearing part of a conversation and follow the couple speaking off the tube, she’s pregnant and about to meet her father. I say father, but it is actually more like a daddy – of the sugar kind. A bit extreme perhaps, but it happens more often than you’d think, desperation can lead to making choices you thought you never would even consider for a moment.

In the less extreme, a character gets overlooked at work because she isn’t assertive, and keeps imagining she sees her mother, two colleagues compete about a promotion and an art student from a wealthy background comes face to face with poverty.

But this piece isn’t really about the plot of the different stories. More than anything, Crossing is about moments in people’s lives. And the moments are very, very moving.

A young woman stands on the tube, talking about feeling invisible, about the loss of her mother, the only person who understood her, while more and more people crowd her, underlining the words so perfectly it hurts even more to watch. A young man with anxiety attack lies in bed unable to sleep, overwhelmed with thoughts and fears, and you see the effects on his life, his mood and his career.

An older man, a refugee, is humble and embarrassed at a food bank, where he’s being helped by a French girl from Cannes, who goes from feeling awkward and weird about the experience over time builds a real connection and a real understanding.

There are more moments, but those are the three that really stood out. There is so much honesty in this play, pieces from people that are so private, you feel like you’re visiting their hidden thoughts and feelings in a way that’s almost too intimate, but it doesn’t feel pretentious or overplayed at all.

The cast are all exceptional, and they all play at least two characters that are polar opposites and are equally believable as each extreme, which is delightful. The swap between scenes and characters are done with the movement of sparse furniture and adjustments to outfits, like a pair of glasses or a scarf. At no point did you confuse the different characters.

And while I thought the entire cast were great, I have to particularly mention Zain Qureshi as Mujahid, the Muslim refugee who has come to the UK from Syria. The writing doesn’t hit us over the head with his sad story, whilst it’s clear Mujahid has suffered from severe trauma, he has a clear moment of strength as he dismisses being a refugee, as he says refugees don’t make it across the border, they die at sea. You get a glimpse of a passionate, strong man who has been knocked down by life but is still fighting. The scenes with Mujahid are subtle but so strong, and it’s something you keep thinking about after leaving the theatre.

Crossing is heartfelt, funny and profound, and doesn’t offer any solution. The ending is a bit abrupt and you feel there are more things to say about these characters that didn’t fit into the one hour, and there’s certainly space to either develop the piece further or take the individual stories into separate plays. Wherever it goes, it will be interesting to watch.

It is 2018 and the population count of London totals 10.66 million people. Of these, 2.67 million cross paths on the tube every day. The eye of the average commuter will fall on hundreds of people every day, but they will never know any more about them apart from the snap judgements they might make based on their appearance.

‘Crossing’ intends to observe and understand the people we see every day on the busy tube. We tend to put people in boxes and assume things about them but everyone has their own story. This piece investigates these stories and relationships as we follow our characters trying to make sense of their lives in the city.

It is 2002 – another Royal Jubilee year, and HRH (Mary Roscoe) is due to open a new Science wing in a 'sink' comprehensive where Dr Derek Jones … END_OF_DOCUMENT_TOKEN_TO_BE_REPLACED

Dr Anna LaRosa (Dr Stefania Licari) has a lot to say. Just as well, as she’s the only one on stage in this medical comedy, which largely draws its … END_OF_DOCUMENT_TOKEN_TO_BE_REPLACED

Nikhil Parmar’s one-man show, originally written as a TV pilot, manages to touch on a wide range of themes from Islamophobia to modern fatherhood with … END_OF_DOCUMENT_TOKEN_TO_BE_REPLACED

Handel’s 1738 opera Serse (or Xerxes) is an exploration of power, love and human frailty. King Serse falls in love with the voice of his brother … END_OF_DOCUMENT_TOKEN_TO_BE_REPLACED

Lea Salonga has her fans. She also has some superfans, the ones who yell, “I love you Lea!” at almost every opportunity. If that wasn’t enough, there … END_OF_DOCUMENT_TOKEN_TO_BE_REPLACED