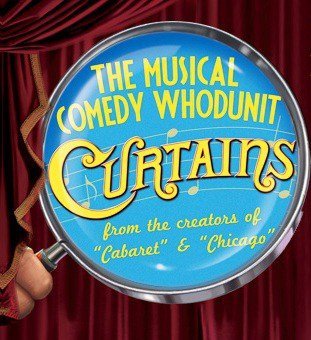 The Landor Theatre’s production of  Curtains written by the music and lyrics team Kander and Ebb, is an absolute delight. It is a hilarious pastiche, but this cast keep the truth shining through at every moment.

The Landor is one of the earliest fringe theatres, starting life in 1994. Its focus is primarily on producing or housing musical theatre productions in an intimate environment.

Curtains had its world premiere in 2006 in Los Angeles, transferring to Broadway later in 2007.

A show within a show, – ‘a musical comedy whodunit’…..this is a musical for people for who adore musicals!
‘Curtains draws us into the  backstage world of a disaster-stricken theatre company putting on a production of ‘Robin Hood’. With the sudden death of their leading lady and terrible reviews, things are not going to plan. As the story unfolds there are plenty of laughs and much for the audience to enjoy.

With large production numbers and a great set and costumes, this revival  directed by Robert McWhir, has a very glossy feel to it. McWhir has cleverly utilised the small space of the Landor to the production’s advantage.

Jeremy Lagat gives us a superb performance as musical theatre loving detective, Lieutenant Frank Cioffi. Arriving at the theatre hoping to solve the mystery behind the death of the show’s star, Cioffi is in his element surrounded by ‘Show People’ and is eager to help the company make ‘Robin Hood’ a smash hit.

Fiona O’Carroll is lovely as writer Georgia Hendrix who is forced to make a return to the stage after some time to take over as leading lady in the musical that she and her ex – husband had in fact written. This song-writing partnership comes to an abrupt end as she is thrust into the spotlight once more. A very special moment of the show is when Aarron Fox as Leo Andrew sings of missing a creative partnership, ‘I miss the music’.  Kandor wrote this after Ebb had passed away before Curtains had been completed.

The  talented ensemble constantly hold your attention, each performer full of character at every moment. It’s Daniella Bowen who shines out however in this production with her fantastic performance as super ambitious Bambi. Constantly  being put down by her producer mum, Carmen Bernstein, played by feisty Buster Skeggs, Bambi is determined to prove herself, and her abilities. This results in a great hilarious dance routine in Act Two.  Bambi succeeds in showing  everyone how talented she truly is, and that she will definitely to go far….and with her stand-out performance tonight in Curtains, so does Daniella Bowen.

Robbie O’Reilly’s choreography  is full of personality and Michael Webborn leads the band with panache.
A lovely touch is that inside our programme we have also been treated to the playbill of ‘Robin Hood’; reading the biographies of these ‘characters’  was very entertaining.

The final words from the cast is a plea to keep the events of the evening top secret. So you had better buy a ticket for Curtains so you can find out exactly  what unfolds for yourself!

This play was first put on at The Mill at Sonning in early 2010 - the world has, of course, changed significantly since then, and the script has been … END_OF_DOCUMENT_TOKEN_TO_BE_REPLACED

It’s easy to see why the Orange Tree has brought this one back for another run, less than a year after its first outing here. This is a bold, … END_OF_DOCUMENT_TOKEN_TO_BE_REPLACED

I always loved Choose Your Own Adventure books. Definitely not the Steve Jackson ones where you had to roll dice (who did that?) to find out whether … END_OF_DOCUMENT_TOKEN_TO_BE_REPLACED

Well, there’s a bit about Pablo Picasso’s (1881-1973) paintings in this show that bears his name. But it’s mostly about his approach towards women. … END_OF_DOCUMENT_TOKEN_TO_BE_REPLACED