August means one thing in the theatrical world. It’s Fringe time. No, I’m not talking about Edinburgh but Camden. Every year local theatres in the Camden area put on a great festival of work, and I manage to get along to the Etcetera Theatre to see one of these shows. The play was Daddy Issues and was written and performed by Anna Krauze. 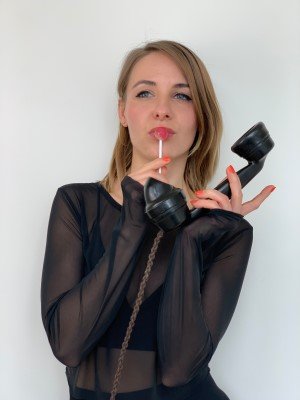 Natalia is a struggling artist trying to make it big in London. Her art is personal, very graphic and not necessarily to everyone’s taste. Her pictures wouldn’t necessarily sit well on the same wall as a Matisse for example. She has had one exhibition but so far, has failed to take the art world by storm. Luckily, she has found another occupation to provide the money to keep her body and soul together. She works on a sex line providing the ultimate fantasy for men.

For a one-act show, Daddy Issues really packs a lot into its sixty-minute run time. For a start, there is art, including some very vivid paintings to see and digest. I’m not sure if Anna did the paintings herself but she certainly produced some interesting sketches during the show. So, we have real art, then the other elements of the story. Feminism, sex, gender politics, abuse, pleasure, betrayal and so much more.

Anna has written a very deep and complicated character in Natalia – after all, how many strident feminist sex workers are there in the world? Let alone ones that have more than a modicum of sympathy for the people using their services. I could fully understand why Natalia is successful in her occupation. The character has a wonderfully engaging personality, not to mention an impressive range of accents, and a real willingness to throw herself into ensuring that when her clients end their phone call, they are fully satisfied and eager to return.

The story is good, but I do think the show needs to be longer. There’s such a lot going on and the ending didn’t fully resolve matters to my mind. Maybe that was deliberate, leaving the audience to review and decide where Natalia’s life goes once the lights went down but I do believe there were too many open threads to go over for me.

However, Krauze, under the direction of Carol Tarran has put together a really good, energetic, and absorbing story. Natalia feels real and the things she goes through are believable on the whole. The show really works and, just like Natalia’s clients, it left me satisfied and wanting more.

The main character, Natalia, is a Polish immigrant, an unsuccessful painter who works on a sex line. She mainly gets calls from older men who want to get a “young girlfriend experience” and for a moment live out their fantasies of what is no longer easily available to them when they’re stuck in tedious jobs, unfulfilling marriages and daily routines.
Nat shares insights of her work and the requests she gets, slowly revealing details of her own affairs with men, her emotional baggage left by various complicated relationships and troubles of navigating one’s life where dreams are overshadowed by issues carried from childhood into adulthood.

Written and performed by Anna Krauze. Directed by Coral Tarran. Our project is supported using public funding by the Arts Council England: we have been awarded the Arts Council National Lottery Project Grant 2021.

The thing about Panto is not to over-think it. It’s about having fun and surrendering to the Christmas spirit. Like Christmas crackers, there is a … END_OF_DOCUMENT_TOKEN_TO_BE_REPLACED

Anyone who's worked in investment banking knows it's largely an intellectually-free zone, polluted with people who calculate each other's value … END_OF_DOCUMENT_TOKEN_TO_BE_REPLACED

By the production’s own admission, the version of events as detailed in Bonny & Read is unlikely to equate to an exactly full and fair account of … END_OF_DOCUMENT_TOKEN_TO_BE_REPLACED

This early Rattigan play has had an interesting life. Set in the Second World War and premiered while that conflict still raged, it has since found … END_OF_DOCUMENT_TOKEN_TO_BE_REPLACED