One of London’s finest secret venues, the Crazy Coqs Cabaret & Bar at the stunning Brasserie Zedel is the perfect venue for the opening night of Dad’s Army Radio Show, a touring two-man production of that television (and radio) stalwart, Dad’s Army, which celebrated the contribution of the Local Defence Volunteers to the successful outcome of the Second World War. 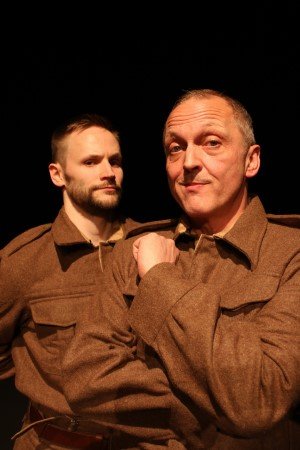 Set in the fictional south coast town of Walmington-on-Sea, Dad’s Army was and is a phenomenon, hugely entertaining and enjoyable by all ages while probably helping to keep alive some of the sentiments that eventually played out in the Brexit referendum. First seen in 2017 in Edinburgh – with different episodes – man-of-a-thousand-voices David Benson and the equally talented Jack Lane are simply phenomenal, delivering near-flawless impressions of John Le Mesurier, Arthur Lowe and the rest of the cast.

This new production – possibly the final one – comprises three episodes: the less well-remembered ‘When You’ve Got To Go’ in which the “stupid boy”, Frank Pike, attempts to enlist in the Royal Air Force; and the all too familiar ‘Never Too Old’ in which – after 79 episodes over nine series – Jones the butcher marries Mildred Fox, Walmington femme fatale, and the cast toast Britain’s Home Guard; and the sublimely funny ‘My Brother and I’, about which its best to say nothing in advance. Inevitably, a little is lost in translation, not least possibly the best visual gag of the entire series, but this is nostalgic comedy at its very best… one can only imagine the reception Benson and Lane will receive when the tour reaches the fabulous Dad’s Army Museum at Thetford.

Highly recommended for fans of the original.

David Benson (‘Goodnight Sweetheart’ and ‘One Man, Two Guvnors’) and Jack Lane (‘Wisdom of a Fool’ and ‘7 Days’) transport the audience right back to Walmington, working from original radio scripts – complete with sound effects, vintage music and all of Perry and Croft’s beloved characters and catchphrases. Highly acclaimed by critics and by audiences of all ages.

‘When You’ve Got To Go’
Prviate Pike passes his call-up medical A1 (in spite of his chronically bad chest, his painful sinuses, his weak ankles and recently acquired nervous twitch). At the evening’s parade, Mainwaring and the platoon decide to celebrate Private Pike’s departure with a dinner in his honor at the local fish and chip restaurant.

‘My Brother and I’
Just as Captain Mainwaring gives the go-ahead for a sherry party with local dignitaries, his drunken brother, Barry, turns up to spoil the occasion.

‘Never Too Old’
The final ever episode of ‘Dad’s Army’, originally broadcast on Sunday 13 November 1977. The wedding reception of Lance Corporal Jones and Mrs Fox is interrupted as the platoon are put on full invasion alert.

This isn’t the first production to go down the road of referencing a one-star review of their show (from a different publication, I hasten to add). … END_OF_DOCUMENT_TOKEN_TO_BE_REPLACED

Two sisters reunite after the death of their mother, and secrets pour forth. Robert Holman’s new play gently exhibits talented classical acting in a … END_OF_DOCUMENT_TOKEN_TO_BE_REPLACED

Everyone’s vexed in this show, though some have clearer reasons to be than others. Mrs Driscoll (Tameka Mortimer) is struggling with a home life that … END_OF_DOCUMENT_TOKEN_TO_BE_REPLACED

The penultimate production of the 2021 Tête à Tête Opera Festival, based at London’s Cockpit Theatre and showcasing contemporary and avant-garde new … END_OF_DOCUMENT_TOKEN_TO_BE_REPLACED

Relatively Speaking premiered in 1967 and is the sort of show that is, by contemporary standards, very much of its time, and not just because of … END_OF_DOCUMENT_TOKEN_TO_BE_REPLACED