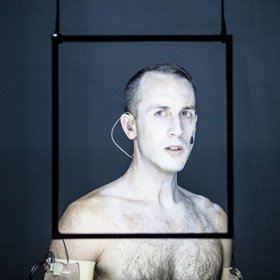 I have no idea what exactly it meant, but I loved it. YOUARENOWHERE is part gallery installation, part theatrical event as the physics of space and motion are rapidly filtered into those ever compelling universals of love and time. ‘Will they get together?’ (She doesn’t need to date which means she’s finally ready.)

Haze drifts and lights flash as songs are sung and words fly while the audience is steered towards an optical surprise which acts both as metaphor and a call to action. (No spoilers here.) Icebergs of provoking truths are touched upon. (Love is selfish, you decide one person is more important than anyone else on the planet. And, if life is minutiae, so perhaps are you.)

This show is fun and intriguing and thrilling. There are projections onto a screen which disappear to reveal yet more layers of illusion. The likeable Andrew Schneider is echoed by another character in such a way that they seem the same for a while. This is a concept at the core of the show. Things appear the same at first sight that aren’t. (Look more closely.)

Attended by an A list audience of New York and London theatre makers (and one Oscar winner), hanging about beforehand in the unlikely venue of the Shoreditch Town Hall bar, the talk was of having seen the show before, ‘in Paris.‘

Running at about an hour, this is an innovative, delightful piece of theatre, not to be missed.

YOUARENOWHERE has now sold out, but if you promise to keep a secret there may be another opportunity for you to take part – email youarenowherelondon@gmail.com to find out more.

A man with a nosebleed appears, possibly from the near future, to tell us something. Microphones crackle and break. Signals get scrambled and transmissions glitch.

OBIE award-winning creator and performer Andrew Schneider brings YOUARENOWHERE to Shoreditch Town Hall from New York in a co-presentation with the Gate Theatre, Notting Hill and LIFT. Playing in the Assembly Hall, YOUARENOWHERE will transform the physical performance space in a collision between theatre, sci-fi and a high-speed physics lecture: a sensory overload into the modern condition of time, reality and independence in the digital age.