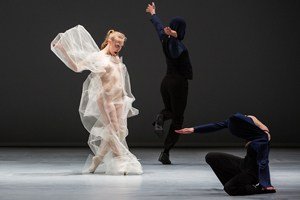 A show of contrasting halves, the latest creation by Canadian choreographer, Marie Chouinard, Soft virtuosity, still humid on the edge, is uncomfortable, provoking and frustrating as the second, Henri Michaux:Mouvements, is a counterpoint of delight and rhythm and energy.

Both use a screen but with notably differing degrees of success. In the first piece, the stage is dwarfed into insignificance by the magnifying screen which captures and projects nuance as it happens in an overly repetitive and lingering tableau in which gesture is reduced to the exaggerated minute, barely visible on stage from the stalls, never mind the upper circles, without reference to the screen . The accompanying music successfully appears to be intended to grate on its audience, except for brief moments of relief when the organic sounds of birdsong and running water emerge from the man-made cacophony and the isolation of the statue like configuration of figures is broken and human connection happens again.

It’s a slow, difficult piece focusing on the busy grotesque and the extreme, save for one solo of a dancer rapt and lost in his own separate world of music relayed only to him through his headphones which drew appreciative laughter from an identifying audience.

The second half of the show portrays Henri Michaux: Movements and is much more enjoyable. In 1980 Marie Chouinard discovered the book, Mouvements by the idiosyncratic poet, writer and painter, Henri Michaux, (1899-1984) whose art work is suggestive, not quite figurative. Born in Belgian he wrote in French, travelled, took some drugs. His book, Mouvements, contains sixty four pages of India-ink drawings, a 15 page poem and an afterword which Marie Chouinard has read and recreated as a choreographic score.

The screen is used to marvellous effect here, providing the framework of a book on which Michaux’s drawings are displayed as the dancers on stage recreate them, beginning with shadow play which we have all tried as children before moving on from a literal interpretation to a remarkable translation of the energy of the drawings on a page through the dynamisim of the shapes and movement of dancers. Very surprising and quite wonderful. At the right moment there is a switch which becomes mesmerising and possessing. Then, as you think, very clever but so what, there is the afterword of Henri Michaux, written in 1951, which provides the answer.

Mouvements is driven forwards by the marvellous, frenetic pace of the music, Japanese Taiko drumming ( I think). This is not a perfect match for the rhythms of the beautiful poem, reproduced in English in the programme and necessarily spat out, not so much recited, in French but the relentless beat and drive of the drumming is perfect for the drawings. The individual sounds attached to certain gestures in this piece are evocative and stirring too.

Be aware the music of this show is not for the faint-hearted, being first, enervating and disturbing and then loud and relentless, but Mouvements may make you also able to see marks on a page differently and is a definite delight.

Soft virtuosity, still humid, on the edge is performed by ten dancers and explores the body using different tempos from a frantic pace to extreme slowness, through various forms of perambulation (laboured, limping, unbridled, en pointe and demi-pointe). Captured and projected live, the dancer’s faces are filmed close-up and presented as an emotional kaleidoscope.

Completing the double bill is HENRI MICHAUX : MOUVEMENTS, a meeting of dance, visual arts and writings. In 1980, Chouinard discovered the book Mouvements by the Belgian surrealist Henri Michaux (1899-1984), which contained 64 pages of India-ink drawings, a 15-page poem and an afterword. Chouinard reinterprets these into a unique choreographic score. Michaux’s drawings are projected in the background, allowing the audience to simultaneously read the artist’s score.