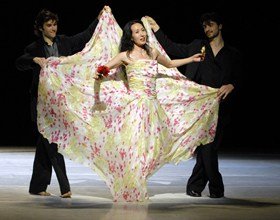 This production is a joy of grace, poignancy and artistry combined. Do whatever you must, to experience it at Sadler’s Wells.

We meet the female dancers in this piece as if they are nymphs, maidens in flowing jewelled colours as yet unknowing of the powers of youth and the feminine they have assumed and the impact these have on the world of men.

On a vast, empty stage, shimmering with light, the girls dance, butterflies in the sun, poignant in their joyousness and unknowing of the mortality of these moments. For where there is youth there will be age, where there is blossoming life, there will be inevitable death. And sexual powers will burn to dim.

The power dynamics between young women and men are explored in the first part of the show, before the interval as the female dancers mesmerise with their charisma and charms, both on the stage and off, playfully the audience in their innocent conspiracies. There is much facial expressiveness, some spoken words of communication, lyrics of songs as lovely meaning.

There are, however, occasional foreshadowings even early on. What should be life-giving water is poured in such quantities over one dancer, she is overwhelmed, while another subjected to the same treatment, though drenched, continues to maintain the rituals of the conventional feminine.

A dancer, carries dead twigs, without leaves, through which she and her partner must kiss. As beautiful as spring, it is winter that travels with her nonetheless.

The second part of the piece, after the interval, is more varied in tone, finds darkness in the relationships between men and women. Water becomes the inexorable, inescapable flow of life, turns to wine. Men sit on chairs and it is the women, unchanged in appearance, whose turn it is to stoop to gather what they blow at them, losing their girlish camaraderie as they take advantage of male betrayals. The burden of being a woman in full, summer bloom is described by the now iconic image of a woman in a red dress having to bear a weighty sapling in new leaf as she walks.

The Tanztheater is an ensemble, the dancers not being visually identified in the programme individually. There are however magnificent solo’s in the second segment of the show, one stand out performance was that of the male dancer in front of the projected waterfall.

After becoming accustomed to separating what we are seeing performed on stage into the masculine and feminine, we are invited to reconsider our assumptions as genders combine to merge, creating a new whole. An enchanted scene towards the end, brings the power of nature into the auditorium again.

Reminiscent of A Midsummer Night’s Dream love becomes an insane whirl of a chase through trees by moonlight. Repetition becomes a theme, ending back at the beginning, tying together who we were and who we have become.

It is impossible to watch this piece about youth and its transition to experience in love without thinking about death. It was premiered by Tanztheater Wuppental Pina Bausch on 12th June 2009. Eighteen days later, its choreographer, Pina Bausch, died, having been diagnosed with cancer five days earlier.

The solo by Dominque Mercy, a founder member of the company, is a marvel for it is as if Pina Bausch is there onstage with him in the shimmer of silver and grey and mauve of his dance.

We see her in her dancers, we see new dancers in the company moving her work on, as it must be to carry on. We live in the now, mortality making transitory moments in life more beautiful as well as more fragile.

There was sadness in the applause at the end, both onstage and in the audience, for, at that moment there was both the presence and the absence of Pina Bausch, the loss and the gain that is ours as we admire and enjoy her work and the marvellous dancers of Tanztheater Wuppertal.

Renowned as the inventor of tanztheater, and widely regarded as one of the most significant influences in modern dance, Pina Bausch inspired generations of audiences and artists before her untimely death in 2009.

Featuring the haunting music of Chilean composers including the theatre director, playwright, poet, singer songwriter and political activist Victor Jara, this piece draws from the country’s popular music, its politics and culture.

Created with her 21-strong company while touring Northern and Southern Chile, como el musguito… is the last work completed by the choreographer before her death.

Handel’s 1738 opera Serse (or Xerxes) is an exploration of power, love and human frailty. King Serse falls in love with the voice of his brother … END_OF_DOCUMENT_TOKEN_TO_BE_REPLACED

Lea Salonga has her fans. She also has some superfans, the ones who yell, “I love you Lea!” at almost every opportunity. If that wasn’t enough, there … END_OF_DOCUMENT_TOKEN_TO_BE_REPLACED

I have no hesitation in saying that the 1952 movie “Singin’ in the Rain” and its 1985 stage version is one of the greatest musicals of all time, … END_OF_DOCUMENT_TOKEN_TO_BE_REPLACED

There are, Maria Caruso was keen to emphasise in a post-show discussion, no wrong answers when it comes to responding to Metamorphosis or even … END_OF_DOCUMENT_TOKEN_TO_BE_REPLACED

Children of the Windrush generation, sisters Dawn and Marcia, grew up in the 1980s. In Roy Williams’ new play Dawn is shown struggling to care for … END_OF_DOCUMENT_TOKEN_TO_BE_REPLACED