Home » Reviews » SCENES FROM THE END: a production of rewarding complexity and beauty 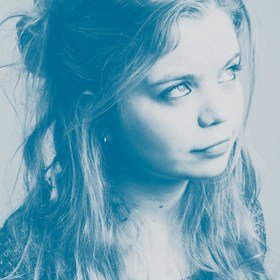 We knew this day would come. Does it matter? Scenes from the End, a new one-woman opera in which the sublime soprano, Heloise Werner, takes us on a remarkable journey through grief to the end of the world by way of the searing compositions of Jonathan Woolgar.

Director, Emily Burns, correctly maintains this production’s focus on the extraordinary twin talents available to her. Stripping down the set to a black room, less becomes more. Allowing the dark surround to become eternal space as two spotlights focus on Miss Werner, the star, singing almost entirely unaccompanied by other instruments. Sometimes the lighting designer, Abigail Waller, turns the house lights on, so we can all see one another.

There’s a prelude and three following sections to this opera. It opens with words by A.E Houseman, T.S Eliot and Carl Sagan, reminding all of the indifference of nature to our preoccupying mortal concerns.

Grief is described for the loss of the whole of our universe, an immense, inhuman, unimaginable event but for the playing of a faint, modern beat, as if there might be a nightclub in the distance, not too far away. This beat disappears and reappears throughout the flow of the show, fixing the unfolding tragedies as being of our time, possibly happening to us.

The second part of Scenes from the End, deals with the end of humanity. Miss Werner sings of how we fed off the earth, could not become it. She is the last human left alive, a terrible thing. With her ponytail and pink trainers, she summons with her performing skills the joy of all those children who have had to die. An interlude follows, in which we are invited to relax, Miss Werner sings us the blues. A genre simultaneously summoning an ambivalence of melancholy and sensuous pleasure.

Lament II follows, a soaring solo of a lone human voice singing a song about the end of us. A scenario too imaginable these days. Tears may well flow.

Part Three looks through the narrowest lens of all, describing the grief we must all suffer sooner or later on the loss of a loved individual. There is dissonance and discomfort watching the suffering in this section,being already moved by what has come before. Everyone can master a grief, we are reminded, but he that has it. (Much Ado About Nothing.)

What comes next as a conclusion is wonderful and unexpected, capturing as it does the magnificence of the solar system in which we exist, in a room.

This is a production of rewarding complexity and beauty, showcasing the brilliance of Miss Werner and Mr Woolgar. Scenes from the End is your opportunity to follow these talents forwards from here.

Scenes from the End is a new solo show exploring the overwhelming themes of death and grief. At times reserved and reflective, at times comically direct, it is a tour de force showcase for soprano Heloïse Werner. Using a colourful array of vocal and performative means, composer Jonathan Woolgar and director Emily Burns imagine historic, comic and tragic pictures of “the end”, from the heat death of the universe through to the demise of humanity and finally the end of an individual life. How might we grieve for them?