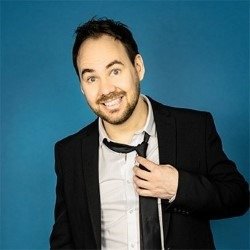 Self-confessed people pleaser Daniel Audritt has bought his new show Better Man to the 2019 Edinburgh Fringe. Opening his performance with a video exploring in a light-hearted manner how the media portray men and our social expectations!

His entire performance centres around being a “better man” and just how far he is personally willing to change himself for the right relationship to work. Although changing for anyone isn’t an advisable way to start any relationship.

How far has society been responsible for structuring our view of the ideal man? Should he be manly, drink a lot, broad-shouldered and have a full beard? Everyone has their own vision of what attributes their partner should possess. Luckily for Audritt though, his girlfriend likes his type!

The crowd genuinely warmed to him and playing to an almost full room at Just the Tonic at The Caves the atmosphere was jovial, warm and receptive. Many of his jokes got plenty of laughs and in all honesty, there isn’t anything to dislike or to be offended from his style of humour.

Audritt has taken an unusual approach to comedy through this show and due to his demeanour and gentle tones he can pull off the subject matter with ease. Very few comedians would be able to deliver this set with his believability.

There aren’t any close to the mark jokes or anything in his set to cause a sharp intake of breath. Although it’s not a completely vanilla performance it’s a pleasure to watch clever thought out comedy without an onslaught of swearing. There is always room on the circuit for another style of a comedian.

Award-winning comedian, writer and co-creator of Comedy Central’s Modern Horror Stories, Daniel Audritt brings his much-anticipated debut hour to the Fringe. Having previously written for 8 Out of 10 Cats Does Countdown, Mock the Week, Comic Relief, The News Quiz, Dead Ringers, NewsJack and many more, the show will be punchline-heavy stand-up comedy show that questions love, relationships, modern masculinity and what it takes to be a good guy. Dave’s fourth Best Joke of the Fringe 2018.

The descriptions of what happens in this show are so vivid that paradoxically they leave nothing to the imagination – and, at least at the performance … END_OF_DOCUMENT_TOKEN_TO_BE_REPLACED

As theatre productions go this is a memorable, magical experience filled with heart and love and so many tiny thoughtful details, that I’m not sure a … END_OF_DOCUMENT_TOKEN_TO_BE_REPLACED

There are no props at all in Dog, and yet despite a dog, Roy, being very much a key character, the staging and dialogue are more effective than they … END_OF_DOCUMENT_TOKEN_TO_BE_REPLACED

Be astonishing. That’s Derek Jarman’s exhortation to the world at large and - at the end of the show - to this particular audience. And in this … END_OF_DOCUMENT_TOKEN_TO_BE_REPLACED