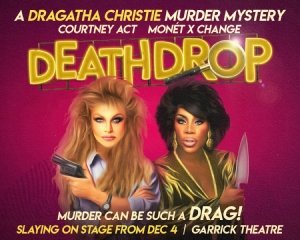 Everyone loves a good murder mystery, don’t they? Well, according to the Guinness Book of Records they do. Dame Agatha Christie holds the title of World’s best-selling Fiction Writer with sales of over 2 billion books. And Christie’s play, The Mousetrap, has been in the West End since 1952 and looks set to run forever. However, as in a true AC story, things are not always what they seem, and a new contender for the crown has raised their highly coifed head to challenge the Dame’s dominance of crime in theatreland with the opening of Death Drop – a Dragatha Christie Murder-Mystery at the Garrick Theatre.

It is a stormy night in 1991, and on Tuck Island, Lady Von Fistenburg (Vinegar Strokes) is preparing to celebrate the 10th wedding anniversary of the Prince and Princess of Wales with a delightful soiree filled with the rich and famous. Helped by the catering team of Bottomley triplets, Brie, Blue and Spread (Holly Stars), Lady Von Fistenburg has everything in place to give her guests a night to remember. And what a kaleidoscope of wealth and talent she has assembled. The beautiful American TV weather Girl, Summer Raines (Monét X Change), the MP for Uxbridge, Rick (known as Rich) Whiteman (LoUis CYfer), and TV Producer Phil Maker (Kemah Bob). Joining them for the evening are sleazy tabloid editor Morgan Pierce (Anna Phylactic), and finally, Australian 80’s pop sensation Shazza (Courtney Act) who brings news that the storm has brought down a tree across the bridge to the mainland, and they are all marooned on the island until it is cleared. A group of strangers in a mysterious and notorious house, cut off from the mainland with a storm outside, what could possibly go wrong? As the guests start their dinner, they soon find out.

As theatrical experiences go, Death Drop is something unique. There have been lots of shows with drag queens in them, but this is the first, in my experience, where the stage has been populated entirely by drag queens and kings. And not just any old queens and kings. We are looking at drag royalty here, with stars from stage and screen, not to mention Ru Paul’s Drag Race. To match the talent on the stage, a good script is required, and writer Holly Stars really knows her stuff when it comes to Agatha Christie. She has either read a lot or seen the awesome Dr Who episode “The Unicorn & the Wasp”. The set-up, character back-stories (everyone has a secret) and final denouement are pure Christie, but with the added freedom of writing for an audience eager for a certain type of humour. The story is pure hokum (as is true with many of AC’s stories) and the script is packed full of one-liners and wonderful linguistic feats – particularly when Brie, Blue or Spread Bottomley describe their extended family. There are a lot of in-jokes about the early nineties and whilst there are not that many laugh-out-loud moments, I found myself chuckling most of the time. However, fun as the script is, the show, running at 2 hours 20 including interval feels a bit too long. The first act is a bit slow too and the pacing is a tad uneven. To my mind, the second act really saves the production and moves along at a much slicker pace with the cast, in my opinion, looking far more relaxed than they did in the first act.

Jesse Jones’ direction is assured, and handles keeping the cast distanced as much as possible in a deft, but at times fairly obvious way. There also seemed to be a problem with the sound quality, and from where I sat, there were times when it was not possible to fully hear the words clearly. This was particularly true during the songs. All that aside, there was a lot to like in the show. Justin Williams’ set, complete with a huge photograph of the royal couple, evokes a manor house in a lovely pastiche of the Christie style, and Jack Weir’s lighting with Beth Duke’s sound design, creates an effective, and at times shocking, lightning storm. But it is Isobel Pellow’s costumes – when combined with Florencia Melone’s beautiful wigs – that really stand out. Every costume, from Brie’s tabard to Lady Von Fistenburg’s evening gown is perfect for the character wearing it. Both my companion, Samantha, and I had our favourite and we both lusted after Shazza’s absolutely fabulous boots.

Looking at the acting, I have to say, this is a cast of brilliant performers who really give themselves to the character they are playing. With so much sheer talent on display, it is not easy to pick out a favourite but, for me, the standout performance was Kemah Bob as Phil Maker. Kemah managed to encapsulate everything that is wrong with a certain type of man. Predatory, sleazy, every action and word loaded with not very subtle innuendo, Phil is a vile human being, and an absolute joy to watch. A fantastically OTT performance from Kemah.

Overall, Death Drop is an evening of frothy fun and games with a talented cast of drag stars enjoying this nicely written and affectionate homage to the queen of murder mystery.

Proust, it is not, but it is a wonderfully entertaining and, camp as a row of tents at Millets, way to escape the reality of life for a couple of hours, and Samantha, and I thoroughly enjoyed our evening with the kings and queens.

A Dragatha Christie Murder-Mystery
Murder can be such a Drag.

Starring RuPaul’s Drag Race superstars Courtney Act and Monét X Change, this brand-new comedy is an historic West End first bringing together a full cast of leading drag performers, in a hilarious murder mystery like nothing you’ve ever seen before.

It’s 1991 and a gaggle of guests gather on Tuck Island for a soirée like no other. The tension rises as the outrageous guests reveal their suspicious and sordid pasts, and one by one they sashay away, until at the last, nerve-shredding, side-splitting moment the surviving guests find out who-dunnit!

This rampant, raucous, ridiculous romp of a murder mystery has gallons of gags, and more twists and turns than a drag queens wig.

Written by Holly Stars
Based on an idea by Christopher D. Clegg

Listings Information
Garrick Theatre
From 19th May to 11th July 2021


There were moments in Two Billion Beats when one wonders if the youth of today really do talk in the way in which the script says they do. Do they … END_OF_DOCUMENT_TOKEN_TO_BE_REPLACED

I have spent much of the last thirteen months of Lockdown (it seems a great deal longer!) in trying to avoid ZOOM meetings, but Dr Will Houstoun’s The … END_OF_DOCUMENT_TOKEN_TO_BE_REPLACED

Diplomacy is better than brute force, though in Ali Stroker’s case it wasn’t so much consultation and dialogue that secured her roles across film, … END_OF_DOCUMENT_TOKEN_TO_BE_REPLACED

This was like an eighty-minute meeting that could have been an email. The only worthy bit of narrative was a few sentences, printed white text on a … END_OF_DOCUMENT_TOKEN_TO_BE_REPLACED