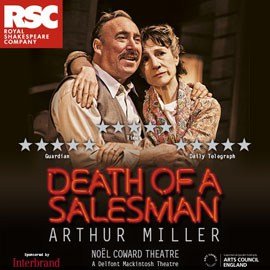 Sometimes, due to its power and thematic scope, a show manages to produce a completely unexpected response from audience members, hitting the viewer for six and leaving them emotionally drained. The RSC’s transfer of Arthur Miller’s Death of a Salesman at the Noel Coward theatre is just such as play.

Willy Loman (Antony Sher) has spent his working life on the road doing what he does best – building contacts, making friends and ultimately selling. Business is his life and sales are all he knows and his career hasn’t been too bad. He and his long-suffering and totally dedicated wife Linda (Harriet Walter) are one payment away from being mortgage free and he is starting to think of the future. Willy is also happy – in his own way – as tonight, staying in the house with him and Linda are their two sons – Happy (Sam Marks) and Biff (Alex Hassell). The relationship between Biff and Willy is – as is often the way with fathers and their eldest sons – fraught, to say the least. Willy is disappointed in Biff, who he believes, has thrown his life away – a college football scholarship, good education and then a job in business worthy of an all American boy – by running around the country working on farms and other such lowly manual occupations. Willy and Happy – who has a ‘good’ job in the business world get along fine but Willy and Biff cannot be in the same room without arguing, sometimes quite violently, despite the fact (as demonstrated in a series of flashbacks) that when Biff was in High School, he, Happy and Willy were really close and loving as parents and children should be.

Willy doesn’t like to admit it but he is getting old and tired – he is now 63. He is having trouble concentrating and keeping focus. Willy is also having trouble with hallucinations – talking to his brother, Ben (Guy Paul) a diamond tycoon after a detour to Africa, whose favourite sentence is ‘Why, boys, when I was seventeen I walked into the jungle, and when I was twenty-one I walked out. And by God I was rich’. For Willy, Ben is the epitome of ‘The American Dream’ and he regularly ‘consults’ him for advice. He also hears things and sometimes seems to drift off in a dream. His sales numbers have dropped off and after a few near misses in his car, Linda persuades him to ask his boss if he can have an office job at the company headquarters. She also tells her boys about their father’s problems and her very real fears of where he is heading. Suddenly aware of how things really are – this is a family with a whole herd of elephants in the room – Biff and Happy decide to step up and help their parents out. For Biff, this means the ultimate sacrifice – going into business – but, despite his personal mixed feelings towards his father, he is prepared to do this to support him and his mother.

Unfortunately, as Robert Burns said ‘The best laid schemes o’ mice an’ men gang aft a-gley, an’ lea’e us nought but grief an’ pain, For promised joy.’ and the next day brings unexpected happenings, petty jealousy, home truths, recriminations, final understanding and ultimately tragedy which leaves every member of the Loman family facing an uncertain future.

The RSC put on Death of a Salesman at the Royal Shakespeare Theatre in Stratford earlier this year and, I have to say, its transfer to the West End is very welcome. The play is often numbered on the short list of being among the finest American plays in the 20th century and I can really understand why. This is an amazingly strong play with a truly stunning cast and a whole host of themes within the superb script. Reading about the play the main theme is accepted as ‘The American Dream’ but, for me that wasn’t the case. I found the thematic strands that really stood out were to do with father/son relationships. A father constantly believing his son does the opposite of what is ‘right’ to spite him, and a son who faces the twin problems of believing he will never please or match up to his father, whilst at the same time making that awful discovery that his dad is just a normal human being with all the frailties and faults that entails.

From an audience point of view, it may not matter what the ultimate theme is meant to be as “Death of a Salesman” is such a superb play that it draws them in from the moment the lights come up on the wonderful two-story house (a fabulous piece of set design by Stephen Brimson Lewis) and Willy appears, stooped and broken, lugging his heavy valises home. Gregory Doran’s direction is spot on and really uses both the actors and stage perfectly. And what actors they are. The entire cast is excellent and, along with the principles already mentioned, I want to single out Joshua Richards as Charley – Willy’s ‘best friend’, and butt of many of his jokes, who manages to express his exasperation with Willy and pride in his own son Bernard (Brodie Ross) with restraint and a wonderful sense of honesty. However, the show itself is dominated by Antony Sher and Harriet Walter, who should be clearing space on the mantlepiece ahead of awards season next year, as they really deserve to be celebrated for their outstanding portrayal of Willy and Linda. It is impossible to express in the written word how amazingly powerful their performances were but I’m hoping you get the gist of my thoughts here.

2015 is the hundredth birthday of Arthur Miller and I personally cannot think of a better or more fitting tribute to his life than this production of Death of a Salesman. Truly outstanding from start to finish.

The background stays largely the same throughout the performance, and appears to resemble the hairstyle of Elle Woods (Courtney Bowman). Regardless, … END_OF_DOCUMENT_TOKEN_TO_BE_REPLACED

Everyman is one of the earliest printed plays, originally written in Middle English and first performed around 1510. It is a morality play, popular … END_OF_DOCUMENT_TOKEN_TO_BE_REPLACED

After being closed for over two years due to covid, the Arcola Theatre has re-opened with Barney Norris’s love song to the people who raised him, We … END_OF_DOCUMENT_TOKEN_TO_BE_REPLACED

Now in its 15th year, La Clique have firmly established their place on the world burlesque circuit and this year’s London cast bring their infamous … END_OF_DOCUMENT_TOKEN_TO_BE_REPLACED