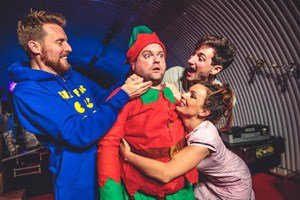 How do you feel about Christmas? Personally, although I am not at full 100% Grinch strength yet, I am really not keen on the festive season. It starts too early, goes on too long and everyone tries desperately to have more fun than they would any other time of year. As a kid, of course, I loved Christmas and looked forward to it with a wonderful sense of anticipation. So, what has changed? Is it me or is it Christmas itself? Well after seeing Different Breed Theatre’s The Night Before Christmas at the Bottle Shop, Bermondsey, I may have an inkling of an idea.

Christmas Eve and, in his Bermondsey warehouse, ‘businessman’ Gary (Tim O’Hara) has got a problem. He has caught someone breaking in and isn’t really sure what to do. He has called his friend Simon (Chris Harper) to come over and when he arrives, Gary explains the problem. This is not a normal burglary as Gary’s prisoner is dressed as and claiming to be an Elf (Glen Hanning). Gary is prepared to give the Elf the benefit of the doubt but Simon is really sceptical about this, and starts to quiz the Elf about how Christmas works and why it changes over the years. The Elf answers everything in a candid and lucid way but is failing to convince Simon fully when there is a knock at the door and Cherry (Michelle Luther) arrives. Cherry is a working class single mum who is prepared to do anything and everything to look after her young son and get him a lightsaber for Christmas. Gary tells Cherry about the Elf, who is starting to look slightly unwell. Over the course of the discussion between Gary, Simon and Cherry a lot of ground is covered, reality becomes confused and secrets are revealed as the three adults decide what to do with the Elf.

First up, I have to say that if you are planning on taking the sprogs to see The Night Before Christmas thinking it will be a recital of the famous poem, you know the one – “’Twas the night before Christmas, when all through the house, not a creature was stirring, not even a mouse; The stockings were hung by the chimney with care, in hopes that St. Nicholas soon would be there; etc” then please don’t. This play is nothing like the sweet innocent poem of the same name. It is rude, crude and at times downright filthy and it is brilliantly funny. Writer Anthony Neilson has written a piece that at first glance seems quite light and frothy but is in reality a really deep narrative that gets to the heart of the whole Christmas idea and why it changes so much the older, and more cynical, you get. I particularly loved the reason that ‘dirty’ people no longer feel the effects of Christmas which was most intriguing and actually, in a very warped way, made a certain amount of sense. And this is one of the strengths of the piece, it is ultimately very sensible and by the end I don’t think it really matters if the prisoner is an Elf or just a bloke in a funny suit – though I have my own thoughts.

Of course a great script and story can’t deliver entertainment on their own. A talented cast is needed and our four actors really delivered the goods. All of them were totally believable and they worked superbly together bringing their respective characters to life. Director Sarah Henley has done a great job with the setting, and if she was responsible for the costumes, I want to know where she got Simon’s 6 Pack onesie from – I really want one.

Before closing off, a quick word about the night itself. The bottle shop is a lovely location for the show with its fabulous selection of beers for a before the show drink. But the night is so much more with food available and what sounded like a highly inappropriate Santa in his grotto, plus if you go on a Saturday night, after the play, there is more entertainment.

The Night Before Christmas is not a traditional pantomime, or Christmas play – it describes itself as an hour long anti-panto. It is probably not advisable to take your gran too – unless you want to be out of the will – but it is a really great show that kept me entertained and, perversely, managed to re-kindle some of the old Christmas spirit in me once more, so I will raise a glass to that.

THE NIGHT BEFORE CHRISTMAS
BY ANTHONY NEILSON
The team behind the new theatre company Different Breed are shaking things up. They want theatre to feel like a good night out, and not break the bank in the process.

With this in mind, they present a Christmas experience with a difference. Anthony Neilson’s hour long dark comedy ‘The Night Before Christmas’ (in which an ‘elf’ has to talk his way out of a hostage situation) will be presented on site, at Gary’s warehouse in Bermondsey. There’s food from local market traders. There’s beer from local breweries. There’s questionable secret Santa gifts, rude Christmas cards, music, and of course, an elf. You might even get to sit on Santa’s (mildly pervy) knee.

They’ve got a stellar cast including Chris Harper fresh from playing Benedick in the Globe’s Much Ado About Nothing, and Timothy O’Hara, soon to be starring as Christopher Wren in The Mousetrap.

Perfect for: Office Christmas Parties, Lonely Evenings for One, A Chilled Night Out, or even A Festive Tinder/Grindr Date Night with a Difference! On Saturday nights the play will be followed by comedy from the likes of circuit favourites Marcel Lucont and Tina Turner Tea Lady.

TINA – The Tina Turner Musical News
This musical is looking to be a huge success in 2018, so if you are looking to book Tina The Musical Tickets, then book early to get the best deals – evenings and matinees at the Aldwych Theatre, London.

Harold Shipman, known to his many patients, family and friends as ‘Fred’, was Britain’s worst serial killer. The official inquiry into his crimes … END_OF_DOCUMENT_TOKEN_TO_BE_REPLACED

Being one of Arthur Miller’s best-made and most challenging plays, The Crucible is also one of his most frequently performed. I was going to say … END_OF_DOCUMENT_TOKEN_TO_BE_REPLACED

To be fair, Linda Lavin called her concert Love Notes, there’s an album of the same name, and that’s more or less what it was about - variations on … END_OF_DOCUMENT_TOKEN_TO_BE_REPLACED

Noughts & Crosses is a euphemism for blacks and whites. The Noughts are the whites and the Crosses are the blacks. In the world of the play, the … END_OF_DOCUMENT_TOKEN_TO_BE_REPLACED

This ‘juke box’ musical offers highly polished, undemanding, feel-good entertainment, showcasing, as it does, 30 songs dating from the 1960s to the … END_OF_DOCUMENT_TOKEN_TO_BE_REPLACED