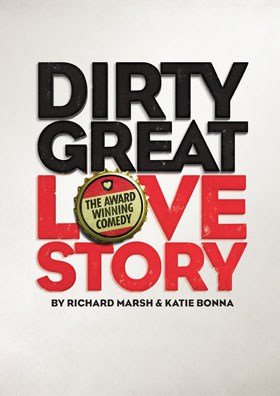 It’s a sad but necessary state of affairs when a show deliberately begins with a mobile phone going off, and then the incoming call being taken, in order to demonstrate how irritating it is when that happens when a performance is in progress. It seemed to work: this was a rare occasion when I sat through a show from start to finish completely undisturbed. Undoubtedly, the first minute of Dirty Great Love Story is better, and substantially more imaginative, than the usual dreary warning just before the curtain rises. I do not mean to infer that it’s downhill from the second minute onwards. It isn’t. A rapport is quickly established with the audience, and it’s not squandered subsequently.

A decent amount of this play is in verse, but it’s not the soppy and melodramatic sort of verse that one might reasonably expect from a show with the words ‘love story’ in its title. It has an edginess, sometimes coming across even as irascible, as it tells a honest-even- if-it- hurts account of an on-off relationship between Richard Marsh (Felix Scott) and Katie Bonna (Ayesha Antoine). What didn’t strike me until the last few minutes of the show (I am quite sure others will have grasped this much sooner) is that unlike Shakespeare plays, and modern plays like King Charles III, mostly written in verse, it’s the ‘normal’ folk that speak in rhyme, and the wealthy character that converses entirely in prose.

That is, however, as subversive as it gets. The first half seems overly long, an almost too detailed account of a stag party and a hen party at the same venue. The boys act like boys and the girls act like girls, as it were. Both actors play multiple characters – five between them – but this production relies heavily on the script to create the right atmosphere for each scene. There are lighting cues, and there is music, but few costume changes. If there were any (none come to mind but there may well have been), it never affected the pace of the show, which flowed so well as a continual piece.

There’s a noticeable change of pace once the party’s over – the play unexpectedly takes off like a rocket. Slightly exaggerated expressions ham up the production somewhat, but the press night audience appreciated it, as it seemed to raise more laughs than a subtler approach may have done. And it’s never a bad thing when an audience reacts and responds to what’s happening on stage. Not every punchline lands as it should, with audible groaning almost as much in abundance as titters and outright belly laughs. No matter. The show engages its audience. Thumbs up to it for that.

The show is a paradox. It gets increasingly absurd yet increasingly believable. One of the characters cringeworthily insists on the sort of slang straight out of the television series Made in Chelsea – ‘totes’ and ‘soz’ were definitely in there, ‘amazeballs’ might have been. Richard, however, has some great lines, the most memorable being, “Katie’s put new glasses in my heart,” spoken after a long and passionate description of what it is like to get new glasses and see clearly after a period of putting off going to the optician.

The two performers are so convincing I thought there might have been an element of ad-libbing going on – either that or they are enjoying themselves on stage so much, they can persuasively come across as though they are saying certain lines for the first time. Maybe it’s a bit of both. I shall be as brutally frank about this show as it is brutally frank about its characters: it was ‘dirty’, yes, but I wouldn’t call it ‘great’. It is, however, highly entertaining and hugely likeable.

Two hopeful hapless romantics get drunk, get it on and then get the hell away from each other.
In her eyes he’s a mistake. A mistake who keeps turning up at parties.
In his eyes, she’s perfect. He’s short-sighted.

It is 2002 – another Royal Jubilee year, and HRH (Mary Roscoe) is due to open a new Science wing in a 'sink' comprehensive where Dr Derek Jones … END_OF_DOCUMENT_TOKEN_TO_BE_REPLACED

Dr Anna LaRosa (Dr Stefania Licari) has a lot to say. Just as well, as she’s the only one on stage in this medical comedy, which largely draws its … END_OF_DOCUMENT_TOKEN_TO_BE_REPLACED

Nikhil Parmar’s one-man show, originally written as a TV pilot, manages to touch on a wide range of themes from Islamophobia to modern fatherhood with … END_OF_DOCUMENT_TOKEN_TO_BE_REPLACED

Handel’s 1738 opera Serse (or Xerxes) is an exploration of power, love and human frailty. King Serse falls in love with the voice of his brother … END_OF_DOCUMENT_TOKEN_TO_BE_REPLACED

Lea Salonga has her fans. She also has some superfans, the ones who yell, “I love you Lea!” at almost every opportunity. If that wasn’t enough, there … END_OF_DOCUMENT_TOKEN_TO_BE_REPLACED