If you think about it, we are all being conned pretty much all the time. Election manifestos, the benefits of education, advertising, job descriptions and even relationships are all predicated around giving the public what they want to get a positive result for the person ‘selling the service’. The good news is that most of the time we are aware of the con, so know how to react and how far to go in responding to what is being offered, Probably, one of the biggest cons of all is theatre, which is why I can sit in the Bridewell, looking at a former swimming pool and happily accept that it is Beaumont-sur-Mer on the French Riviera, the setting for SEDOS production of Dirty Rotten Scoundrels. 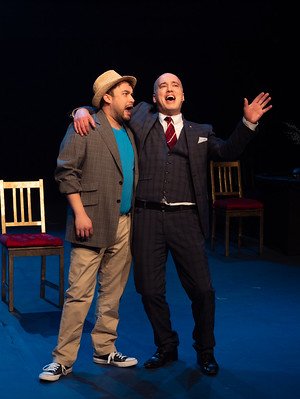 The casino in Beaumont is where you will find elegant, sophisticated con-artist Lawrence Jameson (Rob Archibald). Lawrence, aided and abetted by local police chief Andre (Dan Saunders) is very successful at conning wealthy women like Muriel Eubanks (Louise Roberts) out of their money and is actually pretty bored of how easy his life has become. Andre warns him that a very successful con-artist known as “The Jackal” is said to be visiting the area, but Lawrence dismisses this and moves on with a trip to Switzerland to deposit his ill-gotten gains into his account. On the way back, he sees a rough American swindling a woman out of a meal. Intrigued, Lawrence strikes up a conversation and learns the man is Freddy Benson (Joey Henshaw). Wondering if Freddy could be the mysterious “Jackal” Lawrence invites him back to his villa, where the two of them start to work together.

Unfortunately, two such people are not meant to collaborate, and eventually, they realise that Beaumont just isn’t big enough for both of them, so they decide on a ‘winner takes all’ bet revolving around the recently arrived “American Soap Queen” Christine Colgate (Imogen Johnson). In a town where things are not necessarily what they seem to be, the question must be asked, just who is going to emerge as the top con-artist?

Based on the 1988 film of the same name, with music and lyrics by David Yazbek and a book by Jeffrey Lane, Dirty Rotten Scoundrels, unlike the recent adaptation of Back to the Future, this show honours the film without trying to reproduce it word for word. It is a good old-fashioned musical that retains the vital elements of the movie but also exists on its own. Unusually for a musical, one of the main characters doesn’t appear until quite late in the first act, and a lot of time is spent establishing Lawrence and Freddy which, to my mind, made the first act a bit too long. However, once the trio were together, the story really took off and moved at a nice pace, with even enough time to introduce a secondary, rather sweet romance, for two of the other characters – no spoilers.

The production reaches the extremely high standard I have come to expect from SEDOS with a cast of 20 and a 15-piece band really bringing the story out in fine style. There was a lovely chemistry between the leads which made their interactions feel natural and real. Now, you will have to trust me on this – and go and see the show – as I can’t go into too many details without giving things away, but the relationship between Archibald, Henshaw and Johnson as Lawrence, Freddy, and Christine respectively, works on every level, and is lovely to behold. They, like the rest of this very strong cast, have great singing voices and Henshaw was, for me, the epitome of Freddy.

I’m also going to mention my favourite song, and performance of the show, and that was ‘Oklahoma’ performed with real gusto by Jen Bullock as the husband hungry Jolene. A lovely, and slightly scary, rendition of a lively song that described the ‘virtues’ of getting married to a little lady from ‘The Sooner State’. Loved every second of it. Can’t leave the cast without mentioning the hard-working ensemble, including the unexpected addition to the team, who not only provided excellent backing vocals and dancing but also facilitated the set changes including the world’s most flexible roulette table.

SEDOS have been one of my favourite production companies for a long while and after the last months of lockdown and online material, it was wonderful to see them come back with a bang with this production. Director Zoë Thomas-Webb, Choreographers Jonathon Grant & Fiona McConachie along with Musical Director Chris Nelson, ensured everything ran smoothly and the highly energetic pace of the show was maintained throughout. Whilst there seemed to be a minor problem with the sound levels, particular in the opening number where the band were sometimes drowning out the lyrics, overall, the production worked beautifully and in the words of the opening number really did “Give Them What They Want”.

Based on the film of the same name, Dirty Rotten Scoundrels tells the story of two very different con men, the debonair Lawrence Jameson and the vulgar Freddy Benson. The chalk and cheese con men know they can’t both work the same resort so they decide to make a bet.

The first to make $50,000 from one of the many wealthy ladies of the French Riviera town of Beaumont-sur-Mer will get to stay, the loser has to leave town. All they have to decide is who is the mark – and no mark is more loaded and less aware than the American Soap Queen herself, Christine Colgate.

As they try their different approaches to get the dough, they find that Christine isn’t as easy as they first thought and that this con is going to be harder and more painful than expected, but the most fun they’ve ever had.

Britain, so a London cab driver once told me, is obsessed with the Second World War, as though it happened just recently. Power Luncheon would seem, … END_OF_DOCUMENT_TOKEN_TO_BE_REPLACED

William J Dunleavy, author and star of this monologue play, is a writer and face to watch. He enters the room (as the staging is more geared towards … END_OF_DOCUMENT_TOKEN_TO_BE_REPLACED

Cirque du Soleil’s Luzia is a joyful whirl through a psychedelic Mexico, which reminds us why live theatre is so special. Anyone who goes to … END_OF_DOCUMENT_TOKEN_TO_BE_REPLACED

I am always very excited to come across a new theatre, and Esher Theatre is a real ‘find’, conveniently situated near to Esher High Street and right … END_OF_DOCUMENT_TOKEN_TO_BE_REPLACED

Cecil Sharp is no unsung hero. Without the energy of this driven and at times prickly musician, the traditional folksong of rural England would very … END_OF_DOCUMENT_TOKEN_TO_BE_REPLACED