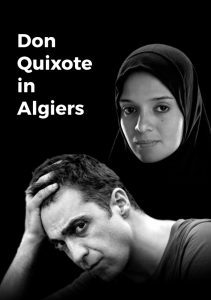 On paper, Don Quixote in Algiers offers an enthralling melting pot mix of fact and fiction. In reality, it suffers, sadly, from being over-seasoned and yet also strangely undercooked.

Dermot Murphy’s work has its roots in historical fact, looking at when Don Quixote author Miguel Cervantes was held captive by Barbary Pirates in Algiers during the latter quarter of the 16th century. Cervantes was imprisoned for a period of 5 years and, during this time he tried to escape 4 times.

We know nothing of what he did during July to November of 1578, but we do know that his famous tome was ‘conceived in a prison’. It is here that Murphy turns his attention; attempting to fill in the blanks.

Miguel de Cervantes (Alvaro Flores) states that he is Christian. The object of his desire is Zohra (Rachel Summers), but Zohra is Muslim and her father, Si Ali (Fanos Xenofos), wants her marriage to be arranged. He does not want the suitor to be Miguel. Both Miguel and Zohra want to escape. Aside from the logistical complications, there are issues as to whether they can find between them enough trust, common ground, love and empathy to make it so.

There are no props, save for a dagger, some manuscripts, and a scribe’s quill. The small, cozy cast are compelled, out of necessity, to muster electricity from these modest means. For the most part, they are able to do so. They are wonderful. It is the script that lets them down. It is too heavy, stuffed with overt theme signposting on the one hand; and too clever-by-halves, story-within- a-story misdirection, on the other. It is the early stages where the problematic seeds are sown. There is no soft launch. It is far too convoluted. Maybe this was at the behest of the director too. Whoever is to blame, the audience is dazed like a sea sick sailor trying to regain equilibrium.

It is disappointing because at the heart of Don Quixote in Algiers are pertinent issues: immigration, division, acceptance, freedom of movement and the pursuit of desire. These themes couldn’t be more timely if this was renamed Donald Trump in the White House. Sadly, it is equally as crude; pummelling the audience with the message, rather than massaging gently and suggesting it lightly.

Captured by pirates, held for ransom for years, he’s a soldier who wants to be a writer. Is this Don Quixote in Algiers who and what he says he is?

He was in a battle where Christians defeated Muslims. Relations between the Islamic and European powers are tense and difficult. He says he’s Christian. Ali, his captor is Muslim. He’s working for Ali; what’s he telling him? Ali’s daughter loves her father but she’s made him angry. He’s arranging a marriage and she so doesn’t want a husband. She knows he has tried to escape before. Perhaps Don Quixote could organise another escape and take her with him to get away from Algiers. Will he take such a risk?

When was this? Well, he was Miguel de Cervantes and Algiers was a multicultural, cosmopolitan city. Both sides had slaves and pirates, both wanted power and the money to support it. This is the background to “Don Quixote in Algiers”. The four characters know what they want and tussle with freedom, truth, women’s place, identity and trust to get there. How far can you compromise in this enduring, awkward relationship? What’s the cost?

If the audience were to be exposed to full versions of the seventy-four songs listed in the programme, it would be a very long show indeed. I suppose … END_OF_DOCUMENT_TOKEN_TO_BE_REPLACED

How can a play be both charming and devastating? Through its tight script, abundant humour and pitch-perfect performances, 4th Country manages to … END_OF_DOCUMENT_TOKEN_TO_BE_REPLACED

Britain, so a London cab driver once told me, is obsessed with the Second World War, as though it happened just recently. Power Luncheon would seem, … END_OF_DOCUMENT_TOKEN_TO_BE_REPLACED