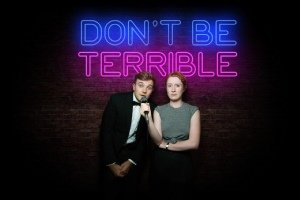 I’d walked into Don’t Be Terrible shortly after seeing two stand-up comedy shows at the Edinburgh Fringe, so my state of mind hadn’t quite switched back to ‘theatrical play’ mode. I still maintain it’s not entirely my own fault – the show is about stand-up comedy, and what Steve (Daniel Cech-Lucas) must do to perform a convincing five-minute set at a stand-up night. He sees Alice Campbell (Elly Condron) do a stand-up routine, and – hugely impressed with it, he manages to persuade her to not only take the time to give him some tips but (in exchange for money, of course) give him some masterclasses.

As I’ve actually witnessed at the Fringe, comedians are not always particularly kind to their partners, even if the harshest criticisms are reserved for third parties such as political figures or someone who has aggrieved them in some way, however rudimentary. So it must be for Steve – quite understandably, he expresses reservations about picking out negative aspects of his relationship, but the main reason, it would appear, why he wants to get into comedy in the first place is because there is an especially amusing man at his girlfriend’s workplace. He’s stuck between a rock and a hard place: talking about how much he loves his significant other, embellished with examples and anecdotes, is very sweet and pleasant – it’s romantic, really. But ‘romantic’ doesn’t necessarily mean amusing, and in this case, it definitely doesn’t.

Called up to the stage, your reviewer’s punishment for sitting in the front row (and no, I wasn’t wearing a press pass around my neck and clutching an oversized notebook), what precisely I was asked to do would prove too much of a spoiler. But as I started by saying, my mind was still actually in ‘stand-up’ mode, so I went off-script. Well done to the cast, therefore, for quickly refocusing the narrative back to where it should have been.

The pace of the show is suitably varied, and the script (Elly Condron and Oliver Milburn) is amusing more often than it isn’t. In keeping with the black box nature of stand-up, there’s hardly any set to speak of, so signs indicating where the show is in its narrative are most helpful. It’s an intriguing play, with some interesting tips about how to approach stand-up and engage with an audience accordingly. It does get a tad predictable, especially when Steve effectively adopts the position of hiding behind the tears of a clown, but otherwise it is a well-constructed and well-performed play.

Can stand-up save your love life? Self-confessed nice guy Steve thinks so. That’s why he’s asked Alice, an up-and-coming stand-up, how to make people laugh. It’s his last-ditch attempt to distract his girlfriend from the funny guy at work. Unfortunately, misanthrope Alice believes in comedy much more than she believes in love, and may not be quite the guru he was expecting. A comedy about comedy, that asks whether nice is ever funny and whether sexy is ever nice.