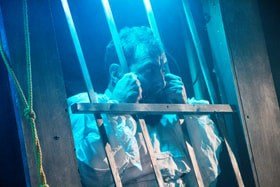 Let Them Call It Mischief is a company that claims to create bold, imaginative and energetic theatre. Their Dracula is not short of any of the promised attributes. Having seen and much enjoyed the company’s take on Dickens’ Christmas Carol a few years ago I arrived at The King’s Head Theatre with high expectations of entertainment which were masterly fulfilled by the company.

Their rendition of the Bram Stoker’s classic is fast-paced and idiosyncratic. All available means are used to not let the energy and intrigue drop for a second throughout the performance. Special praise goes to lighting designer Tom Kitney for truly imaginative and effective work. The use of voice recordings is well justified and serves the purpose perfectly accompanied by acting.

Turning a lack of something into a chance to be creative with what you have is a well-known trick to Fringe productions which can go two ways: create sheer magic, or cause confusion. Creativity is definitely a forte of this company, their use of physicality, light, sound, costume leaves the audience marvelling at the brilliantly executed storytelling without distracting from the plot. This is something this ensemble are good at, and they know it – so much that at very few moments the creative solutions seem to turn into indulgences: things keep getting added that are fun to watch (such as a puppetry scene based on Shakespeare’s Romeo and Juliet but don’t seem to add much to the story, being slightly out of alignment with the general manner of the show. As part of the feedback for one of my early creative writing classes a teacher told me what apparently was told to Mozart: ‘your work is beautiful, but it has too many notes in it’. Killings one’s babies and culling some ideas, especially when they’re so good and witty, is one of the hardest jobs in creative industries.

The writing by Danny Wainwright and Daniel Hallissey is undeniably witty, using heaps of cross-referencing, referencing the references themselves, referencing the lack of references, referencing Blackadder, feminism now and then, immigration, hipster food trends, notions of pop-psychology, consumerism, you name it. These guys know what’s funny in things that are funny, things that aren’t funny, and things that are seen as funny even though should’t be – sometimes leaving the audience wondering what the actual general consensus of the creative team is on the topics addressed, walking on thin ice about whether or not they might think feminism is ridiculous or not, especially because this certainly is a laugh out loud piece, and some of the very hearty laughs of some audience members clashed with awkwardness in the face of others: which is great and makes this a thought-provoking piece.

All performances are strong. Rob Cummings’ title role proves him a highly skilled actor and chameleon, especially since we get a chance to see him portray the very different and more generic Dr. Seaward. Same can be said about Anthony Pinnick, his Jonathan being the epitome of the English gent that Dracula craves to be, while Arthur coming across as a pityful public-school-education-gone-wrong alternative. At Pinnick’s use of physicality is reminiscent of Rowan Atkinson’s body language as Mr. Bean.

The show is what it promises to be: a laugh-out- loud, witty, sexy steam punk crowd-pleaser in the gravy of super popular classical music. It shares the upbeat vibe of the crazier moments in Moulin Rouge. The ultimate razzle dazzle.

We all know the Dracula story…or do we?
‘Dracula’ meets ’39 Steps’ meets ‘Black Adder’ in this hilarious take on the best-loved classic. 1897: Join Count Dracula, the first Romanian immigrant, on his visit to England where he inadvertently strikes fear into the male establishment whilst seeking love in order to break his curse. Every minute is filled with dry humour, surprising twists, and downright silliness.

Cleverly fusing 19th century English gentry together with the modern world, Let Them Call It Mischief’s production is a funny and fast-paced retelling of a well-known Gothic tale, superbly portrayed by five actors taking on a lot of characters.

Known for their playful style, Let Them Call It Mischief bring their Edinburgh Fringe sell out 5 star show to The Kings Head.

How can a play be both charming and devastating? Through its tight script, abundant humour and pitch-perfect performances, 4th Country manages to … END_OF_DOCUMENT_TOKEN_TO_BE_REPLACED

Britain, so a London cab driver once told me, is obsessed with the Second World War, as though it happened just recently. Power Luncheon would seem, … END_OF_DOCUMENT_TOKEN_TO_BE_REPLACED

William J Dunleavy, author and star of this monologue play, is a writer and face to watch. He enters the room (as the staging is more geared towards … END_OF_DOCUMENT_TOKEN_TO_BE_REPLACED

Cirque du Soleil’s Luzia is a joyful whirl through a psychedelic Mexico, which reminds us why live theatre is so special. Anyone who goes to … END_OF_DOCUMENT_TOKEN_TO_BE_REPLACED