There’s a commitment to working class stories in this collection of audio plays. Disturbed is a perfect title for the first one, which to me became more absurd with almost every passing minute. The narrative ends up being a damning indictment on the adult social care sector, without ever mentioning it. Layla keeps meticulous records on whatever is going on with the upstairs neighbours in a block of flats, but this goes far beyond a noise monitoring diary: “I know when they go to sleep and when they wake… I know who showers first… I know when they fight and why… I know when they have sex…” Each round of bedroom activity is fully documented in writing – start and finish times and all the rest of it. It’s all rather obsessive, frankly. Her daughter Niki is studying for GCSEs but it’s a struggle with, well, the banging and screwing along with everything else going on, including a mother who would rather fire off passive-aggressive letters to the neighbours and the local council rather than attempting a civilised conversation. 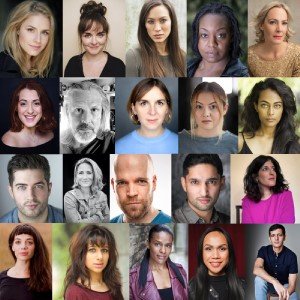 It’s a sad story, really, with both sets of neighbours becoming increasingly petty, and the play ended abruptly, with no resolution in sight, leaving the audience to work out for themselves whether anything was resolved. Was there an out of court settlement of some kind? Did Niki do well in her GCSEs despite home life pressures? None of the characters were particularly likeable which made the play all the more difficult to engage with. It seemed Layla required the kind of professional help that a council investigation of ‘statutory nuisance’ complaints simply won’t provide.

Altogether more nuanced and inviting was Three Chords and the Truth, which tells a dual narrative, again of mother and daughter. It is a useful thing to find something to do that isn’t work or childcare, if only for a short time during the week. Mel’s life is as busy as anyone’s, and like many, when the suggestion is raised that she take up a hobby, she’s not sure how on earth she’s going to fit it in because, family circumstances being what they are, she doesn’t have a lot of downtime. The daughter, Anna, is getting an appropriate level of support for her station in life, though there were considerable obstacles and challenges to overcome to obtain it. The discussions with various stakeholders in the provision of rehabilitative care are painful to listen to but nonetheless, a well-researched account of the barriers faced even by those who actively reach out for help.

Merman had an otherworldly feel to it, perhaps because what happens to Jordie, whose wife is out at sea working for the Royal Navy, seems to be influenced by her ghostly presence. There’s a dual narrative, the other one being about his work as a teacher, which puts him into contact with a pupil regularly placed in ‘isolation’, where pupils are removed from the classroom setting to a designated room, sat at partitioned desks facing the wall, and work in silence, as a form of punishment. In this case, it’s because (without giving too much away) the school is dealing with the outward manifestations of abnormal behaviour rather than the root causes of it. The two plots come together in an unexpected way, and Jordie finds himself in a minority both as a male teacher and a Navy husband.

Two of the plays consider people from overseas. In Donut, Julie is preparing for her driving test, and for whatever reason maintains a veneer of having a poor command of English whenever her employer (she appears to work as a live-in housekeeper). But she knows more than she lets on, in more ways than one, and uses her acquired knowledge to her advantage when the time is right. A more typical immigrant story is told in Footprints, where a Syrian man’s asylum claim is taking literally years to process, leaving him and his family in limbo for an indeterminate period. Naturally, he finds it difficult to keep his spirits up throughout.

In The I in Unify, Jim has founded The Sanity Project, some sort of community centred outreach (I couldn’t quite work out precisely what they did) but, with so many different people coming on board, there’s an inevitable clash of personalities and working styles, which threatens to derail his ambitions. It isn’t the first story to be told about a disparate group attempting to work together towards a common purpose, and facing all sorts of challenges along the way. This play is a kind of tribute to all those who continue to do the best they can for others despite considerable opposition for their good deeds.

It wasn’t always easy to work out what precisely was going on, and some of the characters in these plays were not as developed as they could have been. It isn’t easy to tell complete stories in under half an hour (the longest play goes on for thirty-one minutes, the shortest just over twelve) but this collection does put the kind of stories that aren’t usually told front and centre. A commendable effort.

THREE CHORDS AND THE TRUTH by Cathy Crabb
Mel’s daughter is in rehab. She teaches herself the electric guitar as she cares for her grandchildren. But how do you write a soft rock anthem to do justice to the feelings inside? Three chords and the truth of course.

MERMAN by Lucy Bell
Jordie, the husband of a deployed submariner finds himself a fish out of water on a Navy married patch. As he struggles to grasp how the patch wives stay so resilient, Jordie hears the siren call of the sea.

DONUT by Mina Barber
Julie, a domestic worker from the Philippines is getting ready for her driving test in the UK, but will passing her test give her the freedom that she craves?

THE I IN UNIFY by Stephen Myott-Meadows
Jim’s daughter Sian is in custody, but he’s not the only person in his neighbourhood with things on his mind. The I in Unify explores the power that a community coming together (or not) can have.

DISTURBED by Neela Dolezalova
On the eve of austerity, Niki and Layla are getting used to new neighbours. Disturbed explores the assumptions we make from what we hear through the walls.

FOOTPRINTS by Bisola Alabi
Footprints carries us from an Army married patch, to a prison to a kitchen full of Middle Eastern treat. We glimpse into the lives of Elan, Gwen and Nabil. They are each on their own separate journey at different points in their lives and each character approaches a turning point: some big, some small, but all life-changing.

The descriptions of what happens in this show are so vivid that paradoxically they leave nothing to the imagination – and, at least at the performance … END_OF_DOCUMENT_TOKEN_TO_BE_REPLACED

As theatre productions go this is a memorable, magical experience filled with heart and love and so many tiny thoughtful details, that I’m not sure a … END_OF_DOCUMENT_TOKEN_TO_BE_REPLACED

There are no props at all in Dog, and yet despite a dog, Roy, being very much a key character, the staging and dialogue are more effective than they … END_OF_DOCUMENT_TOKEN_TO_BE_REPLACED

Be astonishing. That’s Derek Jarman’s exhortation to the world at large and - at the end of the show - to this particular audience. And in this … END_OF_DOCUMENT_TOKEN_TO_BE_REPLACED