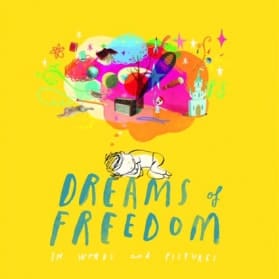 Dreams Of Freedom has been over two years in the making for Chickenshed Theatre and it was well worth the wait. Based on an Amnesty International book of the same name, the company wanted to create a large-scale performance piece using the book as the starting point. Using many workshops over the past two years or so with lots of children having a big input, the piece finally came together last night at the majestic Royal Albert Hall.

After an introduction on film from Amnesty International Ambassador Angeline Jolie, the stage was filled with a large children’s choir and a fourteen-piece youth orchestra some of whom had helped write the excellent original music for the piece. Soon the stalls area (the seats had been removed), was flooded with something like 500 children all dressed in brightly coloured t-shirts – the colours of which denoted which “cluster” they were with. Chickenshed are an inclusive theatre group which meant there were some children in wheelchairs, some being carried by adult helpers, some on the autistic spectrum taking their place amongst the throng. They danced and moved to the music,

brought on props, banners and flags whilst on the two huge screens the lyrics of the songs were shown, “bubbles” written by the children were flashed up and over the pictures, children spoke about the theme of the evening, freedom. Also throughout the piece shown on the big screens, two artists drew in real-time, illustrating the thoughts, the songs and the bubbles. Both artists were superb – Chris Riddell who’s the UK Children’s Laureate and the amazing Jude Holland who’s just 9 but you wouldn’t guess it from his wonderful illustrations which more than matched the much older Riddells!

This was a wonderful evening for everyone concerned – imagine being able to tell your children and grandchildren that in 2017 you performed at the world famous Royal Albert Hall in the footsteps of many musical and sporting greats. It also must have been wonderful for the families of the participants to see their children have this once in a lifetime opportunity and see them grab it with both hands.

So, full marks to everyone who took part both on stage and behind the scenes. There was great energy and exuberance throughout – the kind that only children can bring to an activity. Dreams Of Freedom is packed full of positivity and ended with both the participants and audience holding torches lighting the way to a better future where everyone is free to live, think, pray and as all children should, be free to dream.

Dreams of Freedom – a powerful and inspirational celebration of children’s hopes for the future in a truly monumental performance at the iconic Royal Albert Hall on Monday 26 June at 7pm.

Inspired by Amnesty International UK’s illustrated children’s book of the same name, Dreams of Freedom will be the culmination of a two year project working with children across London gathering their thoughts, opinions, ideas and dreams to create a musical, theatrical and visual spectacular that demands human rights for everyone.

With over 600 children from state, independent and SEN schools across the City, together with members of Chickenshed’s Children Theatres and backed by a 100-strong Young Singers Choir, Dreams of Freedom will be a kaleidoscope of music, song, dance and colour as children reveal their dreams for a better world.