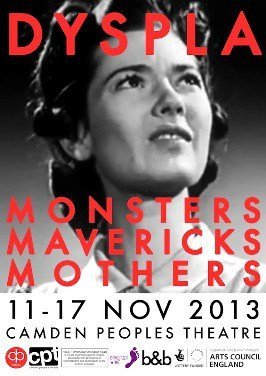 Monsters, Mavericks, Mothers is the title of this years’ DYSPLA festival, which celebrates works by dyslexic artists. From the moment you enter Camden Peoples Theatre, it’s unlike your usual theatre experience. You get given an envelope with cards along with your ticket, and I must have looked very confused, as one of the organisers quickly came up to me to explain that the cards are pieces of a puzzle you can solve at home, intending to make you think about your experience beyond the time spent in the theatre.

The first hour after doors open, you are encouraged to explore the two open rooms. On the ground level, a video installation with different stories about dyslexia including first hand accounts by writers, actors and other creative types, framed by a story named ‘Letters to a teachers’, told straight to the camera by actor Matthew Scurfield out in windy weather, also appearing later as one of the people being interviewed.

What is expressed very clearly in the piece is a notion that I have heard from people with other conditions like Aspergers or autism – dyslexia is part of their Identity, part of who they are, and they do not want a “cure”. As someone who does not have dyslexia, the idea that someone who has it would resist being released from it is difficult to understand. But I think that’s their point, that the focus should be on how to live with dyslexia, not change the person with it. Some of the people in the video go so far as to equate their dyslexia with creativity, and that comes across as a bit odd, as you can be creative with or without dyslexia. I’m not sure I fully understood their core point, but it gave me a lot to think about.

Downstairs, four actors are in different positions in the room, separated by screens and lightning. Each actor performed a different monologue, directly to whoever was standing in front of them at the time. If no one was there engaging with them at the end of their monologue, they would wait for someone to approach, then direct their attention and speech to them. It was a very intense experience and their stories, while not all about dyslexia, were engaging and I spent a long time watching the performers. The audience were also encouraged to write messages on notes and hang them up on a string, to become part of the experience.

Eventually we all made our way to the main event, the play ‘Y & P’, which is loosely based on the personal account of Yvonne Ridley, a journalist who was captured by the Taliban in 2001, and converted to Islam after returning to the UK.

It’s a fascinating story and well played, but there was a lot of narrating from the characters to describe their actions and thoughts, rather than just show us by acting out what’s happening. It draws attention away from the story, as you don’t’ really need to hear that ‘Y discreetly removes her underwear and washes them in the bucket’, for example. It comes across as stage directions spoken out loud. The very end of the performance is video recordings of Ridley herself, explaining in different interviews how she came to convert and that her account of a Taliban that treated her well was not something people wanted to hear. Despite the peculiar constant narration, it is a very interesting piece which also uses a member of the audience as a guard, and repeatedly commands him to perform actions like taking the prisoner to the other room, serving her food etc. It worked so seamlessly that I thought he was part of the cast, not roped in right before the show started.

All in all, DYSPLA has created a fascinating event that gives you a lot to think about. And yes, I sure did solve the programme puzzle.

It is 2002 – another Royal Jubilee year, and HRH (Mary Roscoe) is due to open a new Science wing in a 'sink' comprehensive where Dr Derek Jones … END_OF_DOCUMENT_TOKEN_TO_BE_REPLACED

Dr Anna LaRosa (Dr Stefania Licari) has a lot to say. Just as well, as she’s the only one on stage in this medical comedy, which largely draws its … END_OF_DOCUMENT_TOKEN_TO_BE_REPLACED

Nikhil Parmar’s one-man show, originally written as a TV pilot, manages to touch on a wide range of themes from Islamophobia to modern fatherhood with … END_OF_DOCUMENT_TOKEN_TO_BE_REPLACED

Handel’s 1738 opera Serse (or Xerxes) is an exploration of power, love and human frailty. King Serse falls in love with the voice of his brother … END_OF_DOCUMENT_TOKEN_TO_BE_REPLACED

Lea Salonga has her fans. She also has some superfans, the ones who yell, “I love you Lea!” at almost every opportunity. If that wasn’t enough, there … END_OF_DOCUMENT_TOKEN_TO_BE_REPLACED