Home » Reviews » Earthquakes in London at the Bridewell Theatre | Review 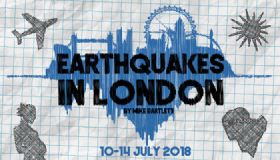 There are some – the current incumbent of the White House for example – who believe that climate change doesn’t exist. There are many many others who not only accept the fact it exists but actually believe the planet is doomed environmentally. The surprising thing is that whilst many of those that do accept climate change will be very environmentally friendly at home, they will still have a car and go on a family holiday abroad once or twice a year. I’m not here to judge but, I think that playwright Mike Bartlett would definitely have something to say as his play Earthquakes in London is presented by SEDOS at the Bridewell Theatre.

The play centres around the lives of three sisters. Sarah (Carrie Pennifer) is the Liberal Democrat Secretary of State for Environment in the coalition government. Freya (Kimberly Barker) is a teaching assistant currently on maternity leave. Finally, there is the youngest Jasmine (Izzi Richardson) nineteen and feckless not really sure of what she wants to do or be. The three sisters are not particularly close to each other and are completely estranged from their father Robert (Paul Francis) a climate expert with a skeleton in the closet, and no real love for his children. The two elder sisters have worries today Sarah must make a decision on a new runway for one of London’s airports. And she will be doing this alone as her husband Colin (Marcus Ezekiel) appears to have lost all interest in everything since he lost his job. For Freya, one of the problems is that her husband Steve (David Pearson) has decided to go away on a trip just when she is getting more upset about the birth of their daughter. Only Jasmine seems to be enjoying life as she meets a new fellow Tom (Hassan Govia) who obviously likes her but may have an agenda of his own as well. For all of these people, and everyone else today is going to be no ordinary day and Mother Nature is about to do something that will lead to a chain of events that will affect the sisters, their partners and the world forever.

Whilst sat, waiting for the play to start, monitors around the auditorium display short snippets of news items from around the world. This is a very good introduction to Earthquakes in London as, the play itself is made up of short scenes that move the action about and, at first sight, can make the whole production feel slightly disjointed. However, once I got used to the style, things settled down and the narrative made more sense. Even the time travel elements didn’t really phase me. The story itself is quite intense and there is an awful lot going on, but I never felt overwhelmed in keeping track of everyone’s narrative. This is due not only to some great writing but to a well put together production by SEDOS and Director Chris Davis. The traverse stage is devoid of a set and is a marvelous space for the main characters and the rest of the ensemble – a total cast of fifteen actors – to move around each other and bring the story to life. There are some really great moments in the production that stand out in my mind – the scenes at Waterloo Bridge for example and the wonderful short scene with Freya and the ‘yummy mummies’ on Parliament Hill, not to mention the talking panda.

All of the actors are really good and quite believable in their roles and the three sisters, in particular, were excellent, with Carrie Pennifer, Kimberly Barker and Izzi Richardson really making the most of the characters of the three girls. In addition, Paul Francis made Robert a real old curmudgeon who it would be easy to really dislike but somehow, his character seems understandable as we learn more about him. Finally, on the acting side, I really want to give a shout out to Helena Bumpus for an absolutely barnstorming performance in her dual roles.

Earthquakes in London is a fascinating play about families, relationships and the planet it covers a span of some 557 years and in some ways defies description as the mixture of theatrical elements come together to produce an at times bizarre but definitely absorbing show. My only criticism is the length. At around two hours thirty including interval, this is a long old play and the first act does seem to go on for quite a while. However, that’s the way the author wrote it so there you are – though I would recommend bringing a cushion with you as the seats do get a bit hard after a while. All told, this is another great production from SEDOS that makes you stop and think about what we are doing to the earth and if we shouldn’t be trying something different so that by the year 2525, man will still be alive.

From the writer of Doctor Foster and King Charles III, Mike Bartlett’s Earthquakes in London is set in the politically charged post-election summer of 2010. Combining a strong sense of humanity with epic ambition, this new production will be staged in traverse at the Bridewell Theatre by Sedos, the City of London’s premier amateur theatre company.

The story presents a fast and furious metropolitan crash of people, scenes and decades, as three sisters attempt to navigate their dislocated lives and loves, while their dysfunctional father, a brilliant scientist, predicts global catastrophe.

Before there was Edward Albee’s (1962) Who’s Afraid of Virginia Woolf, some six decades earlier, August Strindberg wrote his own claustrophobic … END_OF_DOCUMENT_TOKEN_TO_BE_REPLACED

It is 2002 – another Royal Jubilee year, and HRH (Mary Roscoe) is due to open a new Science wing in a 'sink' comprehensive where Dr Derek Jones … END_OF_DOCUMENT_TOKEN_TO_BE_REPLACED

Dr Anna LaRosa (Dr Stefania Licari) has a lot to say. Just as well, as she’s the only one on stage in this medical comedy, which largely draws its … END_OF_DOCUMENT_TOKEN_TO_BE_REPLACED

Nikhil Parmar’s one-man show, originally written as a TV pilot, manages to touch on a wide range of themes from Islamophobia to modern fatherhood with … END_OF_DOCUMENT_TOKEN_TO_BE_REPLACED

Handel’s 1738 opera Serse (or Xerxes) is an exploration of power, love and human frailty. King Serse falls in love with the voice of his brother … END_OF_DOCUMENT_TOKEN_TO_BE_REPLACED