It’s hard to write a review when the main premise of the show you’re watching is that it will be different every time: A) the performer is different for each show, B) the content is decided in real-time by said performer, C) how the content is delivered to us in spoken word is decided by the performer, and finally D) as an audience member we are integral to the show and can influence the outcome of the piece in real-time.

So, let’s talk about the show, what can I share with you that is fixed and relatable? 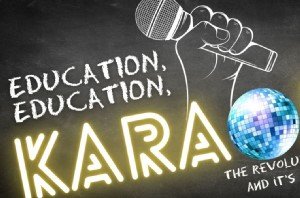 The year is 1997, the year of change, Tony Blair is in Power, “things can only get better” Labour’s theme tune proclaims! This is our time for change, out with the Tory capitalist mentality, state education is not only enough but it’s full of hope. Things are getting better – hope that section 28 will be revoked, class sizes will shrink not grow, education will be the same for those in public and state-run schools – or so the nation hopes!

Welcome to Education Education Karaoke, an exploration of disparate characters thrown together and bounded through their state school education. A play with Songs!

EEK (as I will now refer to it) is comprised of a series of short scenes running from 1997 to 2021. Each scene is announced by the performer and is also written on the screen that stands behind the performer for the audience to read.

The performance style is very Brechtian, which is beautifully apt for a 2021 performance designed as a vehicle for social change. A play with songs for the millenial generation. I’m sure Brecht would approve.

The show is split into 3 acts; VHS, DVD and USB.

For each scene there is a choice, the performer and audience decide together which song/character will be chosen.

Once the song is selected, a part of the story is revealed. Think of the choose your own adventure storybooks that you read as a kid, and the new style of immersive theatre that is popping up across London at the moment.

Once the performer, with the help of the audience, decides which one of our “characters” (S)he is going to choose they proceed to read the character’s words in a style of their choosing. (The words are also displayed on the screen for all to see/ read along with).

There are around 7 characters to choose from, each of them a story to tell, a view to put across, a conflict to wrestle and a state education to endure. Each story comes with a song choice from the year we are visiting.

As a piece of theatre, this is an excellent premise, a conceptual piece of art that will never be the same, yet, ironically the situations that our characters face are universal truths that were as true in 1997 as they are in 2021.

The piece is very clever in that it presents as a light-hearted Juke Box musical, with sing-along opportunities and hints of nostalgia from our own school memories. Yet in the light of day, it packs a huge punch in the face calling out bullying, fear and shame and what can only be described as a desperate need for systemic change.

This show could be a total disaster, a real non-starter but for Tuesday 23rd November’s Education Education Karaoke, performed by Yasmin Dawes at the Camden People’s Theatre I had great fun and left the show with a lot to think about, and desires to act out social change!

Armed with a state education, a karaoke machine and a dance mat, an unrehearsed guest performer takes a nostalgic romp through the last 20 years of education and pop music. Education, Education, Karaoke follows one class from 2000 through to 2020, and as every year goes by the guest performer chooses a number one hit song from that year which is matched up with either a monologue, karaoke challenge or dance mat routine. The choices that are made change how the show turns out, so every night is unique, it’s up to the audience to decide who goes to university, who passes their exams, and who slips through the cracks of a broken system.

Education, Education, Karaoke is the story of the division that wealthy politicians built into state education. Through this choose your own tacky adventure, BAP! asks how we might all come back together in solidarity. Bringing together a production team and cast of performers all of whom have been through the state education system, guest performers will include Yasmin Dawes (Tuesday), Anne Odeke, (Wednesday), Adam Karim (Thursday). Meanwhile Friday and Saturday’s performance will also include a post-show karaoke party and will be hosted by Lauryn Redding and Kate Butch respectively. Education, Education, Karaoke was originally developed as part of Camden People’s Theatre’s Starting Blocks.

Shoes, one would have thought, are fairly recession-proof. The problem for Charlie Price (Joel Harper-Jackson, reprising the role he previously played … END_OF_DOCUMENT_TOKEN_TO_BE_REPLACED

The descriptions of what happens in this show are so vivid that paradoxically they leave nothing to the imagination – and, at least at the performance … END_OF_DOCUMENT_TOKEN_TO_BE_REPLACED

Although not entirely perfect, this staging – the first ever in the UK – of Pablo Sorozabal’s Zarzuela (Spanish Operetta) is brilliant, atmospheric, … END_OF_DOCUMENT_TOKEN_TO_BE_REPLACED

As theatre productions go this is a memorable, magical experience filled with heart and love and so many tiny thoughtful details, that I’m not sure a … END_OF_DOCUMENT_TOKEN_TO_BE_REPLACED