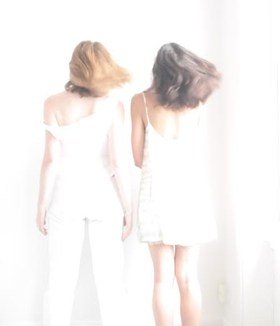 Eggs is an intriguing Millennials drama, played out with panache by writer Florence Keith-Roach and her co-performer Amani Zardoe which, I would tentatively suggest, was sired by Ben Elton out of Victoria Wood (with appropriate apologies for fixing that particular slightly disturbing indelible image in the forefront of your consciousness).

In a script that deals with sex, pregnancy, IVF and, basically, eggs, we are innocently drawn into a soft underbelly of light-touch quips and quiddities only to be violently, defiantly and, at times, hilariously lacerated by Keith-Roache’s searing, serrated-edge exposé of female twenty-something vulnerabilities and fears.

Girl 1 (Keith-Roach) is a layabout artist and Girl 2 (Zardoe) a successful power-suited career girl. They’ve known each other since university and have continued what can best be described as a love-hurt relationship. If you like your withering put-downs, cynical moral blackmail and cat-fights on speed then this is the show for you. It will hit that embarrassing self-recognition spot whilst inviting you to consider whether you really do have any real friends outside Facebook and – is swiping right a good basis for living happily ever after? Importantly, although this is a female written and female performed show by Orphee, a “female-led company championing women in the arts”, it is just as powerfully relevant to men who, judging by the audience reaction, also find it apposite and funny (albeit, possibly, sometimes for different reasons).

I think the show could do with some judicious pruning – the pithy nature of the piece is compromised a little by the length. Director Lucy Wray does a good job with the material but a more ruthless director might be able to counter the pleas of writer/performer that such-and-such line or sequence is “absolutely vital to the coherence of the plot, darling”. The piece was developed in Edinburgh (directed by Maud Dromgoole) and if the aim is to return with the finished article then paring down would have the advantage of fitting in neatly to those one hour Fringe slots.

The action was also slowed by the frequent on-stage costume changes. Personally I couldn’t see the point of changing from one pale pastel-coloured outfit to another pale pastel-coloured outfit. OK, so it’s passage of time and change of location but these two actors are so good that I felt the changes were a gratuitous hindrance rather than a help. Having said that Lily Ashley’s costumes combined easy-changeability with high-street chic and were in keeping with Clementine Keith-Roach’s effective minimalist set-design. Lighting Designer Lucy Hansom and Sound Designer Jon McLeod came into their own in the wonderful club sequence enhancing Keith-Roach and Zardoe’s suitably frenetic club-gyrate to Cher’s “Believe”. The two performers pulled off that rarely seen feat of maintaining the audibility of the funny one-liners to a back-drop of heavy club bass whilst simultaneously engaged in energised contortion mode. Bravo!

The Vaults are an amazing collection of spaces and the Festival has got the place rocking. There’s definitely an EdFringe Underbelly feel to the venue – bare, cracking walls, old cinema seats, hired technical fit-ups. During the “nits” sequence (complete with nits-eggs references, of course) the guy in front of me was attacked by some kind of midge. Already feeling quite itchy (memories of my kids at Junior School: scratching, towels and nit-combs – though not the “turbo” variety that Girl 1 is brow-beaten into buying), this made it worse, though fortunately he was wearing a red baseball cap so was none the wiser. For me that’s real Fringe drama encapsulated: great script; full-on acting; the occasional dull boom of trains rolling overhead; and midges flitting about an audience seated in ancient flea-pit chairs. I recommend the experience.

Though friends from university, GIRL 1 and GIRL 2 are living very different lives. Now in their late twenties, the only things that continue to unite them are their struggle against society’s expectations, a love of 90s dance music and a mounting alienation.
Over the course of a year, the tension of this realisation mounts and the wilfully humorous banality of their dialogues, so reassuring at first, begins to grate against a far more sincere and ultimately tragic subtext.

For this is a story about coming to terms with the absurd horror of one’s own fragmentation in a world. A world where the untimely death of a friend, IVF, pop-feminism, Scarlett Johansson, MDMA and Cher’s 90’s comeback album all chaotically co-exist.

In the end, it is their friendship, however flawed, which rescues these women from utter abstraction. This play celebrates these relationships, for all their bickering and sardonic glory.