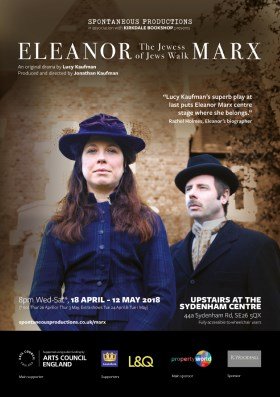 It’s sometimes the welcome lot of parents to be upstaged by the lives and work of their children. When the parent in question is the founder of a world-changing system of political philosophy which then bears his name, the child may vanish beneath the presence of such a virtual sibling.

There are elements of such disappearing in the case of Karl Marx’s youngest daughter Eleanor, better known as Tussy, though they are deceptive and, on investigation, turn out to be very far from the full picture. The expansion and investigation of this picture are at the heart of Lucy Kaufman’s intriguing new play, The Jewess of Jews Walk.

Though Tussy’s own life was short and her death tragic, her list of achievements was long and inspiring. While her father was hard at work on Das Kapital, Eleanor was doing some welcome upstaging in his study, playing games and inventing stories. She had been able to recite passages from Shakespeare from the age of three and, later in her life, after an intense period of political activism in her own right, was an actress.

In Kaufman’s play, we find her in the fraught and joyless role of partner to Edward Aveling, a prominent Darwinian proselytiser. Their menage has not so much evolved as declined into a state of mutual recrimination and, in his case, energetic adultery. Here they are, the actual or intellectual scions of immense revolutionary thinkers, reduced to debating for much of the time the rights and wrongs, mostly the latter, of his infidelity. This emotional pot is further stirred by the menacing presence of Freddy, apparently fathered by Marx with his
housekeeper.

The result is an ironic study of aspiration and falling-short, of the individual’s dire capacity for being blighted by legacy. Just as the world was enlightened by the theories expounded by Marx and Darwin, so their personal shadows darken the rooms of the next generation. No less than in cases of immense and problematic wealth, the great men’s posterity is on them like the weather. Kaufman’s Eleanor puts it more viscerally than this: “Das Kapital and I grew up together. My father would say: ‘Tussy is me.’”

In coldly dramatic terms, the deterioration of the central relationship is an immensely fruitful vine, enabling the play to shift its focus from the public and political to the personal and supposedly private. In the event, this is not so much a shift of focus as a dwelling on industrial abuse’s domestic counterpart. Yes, patriarchy is a crucial villain of the piece. “Women,” says Eleanor with an authorial voice, “are creatures of organised tyranny by men.” There will be no equality until the system is revised.”

Elsewhere there are similar linkages of “big” and “little” politics which knowingly verge on the comic. Eleanor again: “Everyone I love has gone. Even The Cause. I fear for socialism in France with my sister and brother-in-law at the helm.” Straight from The Marxes of Manchester, if there were such a thing.

In fact, this is not the industrial cauldron of the north, but suburban south-east London within, well, striking distance of the 100-seat Sydenham Centre where the play is being staged. For Spontaneous Productions, the author’s brother Jonathan Kaufmann directs with vigour and variation. As Tussy surely was, Sarah Whitehouse’s portrayal has her as alternately powerful and vulnerable, her campaigning energies matched and marred by her profound sense of impotence. With David Sayers’s chilly, indeed chilling Aveling, their exchanges wrestle and wrangle through the impossible thickets of romantic and revolutionary ideology.

They fall into a language that keeps threatening to distance them from self-knowledge. At times, for all the Englishness of such impasses, we could almost be listening to a translation from the European. Yet the meaning is as clear as the core of Marxism itself: we have nothing to lose but the chains of our selves.

Partly funded by Arts Council England and championed by Eleanor’s biographer Rachel Holmes, this powerful piece explores the last few tumultuous months of Karl Marx’s youngest daughter – and in her own right – an actor, translator (of her father’s works as well as Flaubert and Ibsen), a political campaigner, social activist and very much a woman ahead of her time.

In 1896 she moved to No 7 Jews Walk, Sydenham – self-styling herself ‘The Jewess of Jews Walk’ – with her common law ‘husband’ Edward Aveling. What happened there remains a mystery to this day, though the coroner ruled that she died of self-administered prussic acid poisoning in 1898. But was it suicide or murder?

Lucy’s drama confronts themes of love and betrayal, domestic abuse and the role of women in Victorian society.

Everyman is one of the earliest printed plays, originally written in Middle English and first performed around 1510. It is a morality play, popular … END_OF_DOCUMENT_TOKEN_TO_BE_REPLACED

After being closed for over two years due to covid, the Arcola Theatre has re-opened with Barney Norris’s love song to the people who raised him, We … END_OF_DOCUMENT_TOKEN_TO_BE_REPLACED

Now in its 15th year, La Clique have firmly established their place on the world burlesque circuit and this year’s London cast bring their infamous … END_OF_DOCUMENT_TOKEN_TO_BE_REPLACED

Warm, funny and lacerating, Satinder Kaur Chohan’s new play opens with a fly-on-the-wall look at the daily attempts women make to be accepted and … END_OF_DOCUMENT_TOKEN_TO_BE_REPLACED