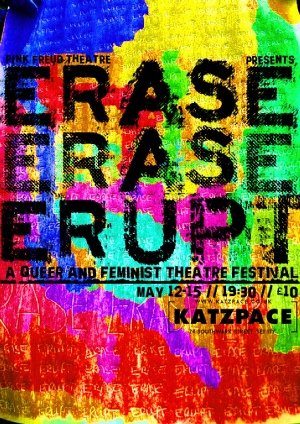 I wondered if a four-day event in the basement of a pub really counts as a ‘festival’ but given the variety of acts listed in the programme, it does seem an apt enough description. Erase Erase Erupt comprises a number of ‘queer and feminist’ performances. There are some one-act plays, one of which is about “voices and spaces and sexual violence”; another explores how trans and non-binary people cope with a world that still largely sees things through relatively traditional perspectives of masculinity and femininity. Had I attended on a different evening, I may have been treated (or indeed subjected) to a ‘Night of Cabaret’, but as it turned out, I’d turned up for a ‘Night of Spoken Word’.

The festival’s title led to the headliner finishing a poem she had set aside for a while, finding it inspiring enough to complete the said poem, and give it a title. Introduced as ‘Lady Unchained’, Brenda Birungi is a poet from south-east London. Put simply – perhaps a little too simply, as there are some complex issues here – it is the past that needs to be erased and a fresh start that needs to erupt. Unchained was sent down for defending a member of her family during an altercation, in what I assume was still interpreted by the criminal justice system as actual bodily harm. She now does a series of live events called ‘Unchained Nights’, which provides a platform for those who are, in a word, ex-offenders.

She was 21 years of age when she entered prison, the same age that one of the festival’s directors, Riz Davis, went into the prison system, though Davis worked as a prison officer – as I understand it, in both male and female wards. For all the set performances from Unchained, wonderful, incisive and informative as they were, it was the free-flowing conversation afterwards that proved all the more engaging and revelatory. It is, as Unchained pointed out, remarkably easy to get into prison, just for standing up for what one reasonably believes to be right.

As a number of people in the audience readily agreed, I looked up afterwards the sort of offences people have served time in prison for. There was the case of Tony Martin, a farmer from Norfolk, who shot a burglar dead in his home in 1999. Then there are cases in which one goes down for not doing something, quite literally: a retired vicar once spent 28 days in jail for not paying £63 of his council tax bill. What is also a concern is the number of people who re-offend and Unchained seeks to assert to as many people that have gone through the prison system that there are ways of rebuilding one’s life post-jail. Of Unchained’s works of art, ‘Dear Mum’ stood out for me, not just for getting the audience to click their fingers, but for the succinct explanations of what prison in the UK is really like.

Many of the other acts that performed chose to read out poetry. Taken together these were on a wide variety of topics and themes. Read out at speed, it would probably take a couple of listens to properly grasp some of the deeper meanings in the verses, but the salient points were very clear. Putting a little context to the set pieces was immensely helpful, though at other times the writers/performers felt it better to plunge straight in. Some of the issues raised may, with hindsight, have been a tad frivolous compared to the subjects Lady Unchained brought up, but this only ultimately highlights the sheer breadth of content covered in a single evening, without any of it feeling disjointed or disorientating, coming as it all did under the banner of ‘queer and feminist performance’. Overall, the show was insightful and fascinating in equal measure.

Expect a glorious programme of work from exciting emerging artists, pushing the boundaries of form and content, learning, discovering and exploding. It is time for the voices of those who are usually erased, to erupt.