I don’t watch a lot of television but even I have some familiarity with the Up documentary film series, following the lives of fourteen people (it’s less than that now, for various reasons) since the first film in the series, Seven Up! In 1964. This play, every seven years, doesn’t quite go as far as 63 Up – which would have been a bit much for a show without an interval – but nonetheless provides some interesting snapshots of the lives of Polly (Laura Hannawin) and Marcus (Jack Cameron). It is, admittedly, slightly contrived: what are the chances, in a world where so much is so transient, that a friendship between two people who met as school classmates would carry on for decades. 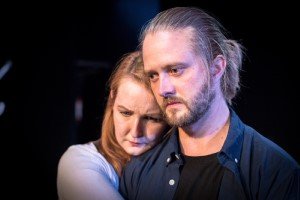 What starts off as teenage experimentation (ahem) goes back even further, although the first scene takes place when the duo are fourteen. He wants her to go away. She doesn’t, being rather gregarious, but it’s not long before she is unhappy and upset. Several minutes later, she invites him to, well, touch her (and I don’t mean a parting handshake). Nothing is ever done by halves by these friends, and Polly’s periodic ability to assume the worst contrasts almost too perfectly with Marcus’ calmer demeanour.

Calmer, of course, is not the same as calm, and it becomes evident that Marcus has his own demons to fight. In a scene I can’t help but call 28 Up he is still dealing with his personal problems without outside assistance, much to Polly’s exasperation. He has his phrases and mannerisms – the play provides some toilet humour of the highest order – but it becomes evident that Marcus’ feelings for Polly stretch beyond friendship. This isn’t the first play to come along to explore the idea of love as a force so powerful it becomes destructive: Chekhov’s The Seagull does it, as does Shakespeare’s Romeo and Juliet.

It isn’t always the easiest story to follow, but it is pretty credible: the pair communicate with one another in such a way that it isn’t always necessary to finish a sentence or state explicitly what it is they are talking about. Each of the scenes are set in different places but in all of them, there’s a sense that the audience is listening into a private conversation, even in a setting as public as an accident and emergency department. This seems to be the key strength of the production, drawing people into a private chat, and then another, and then another…

The language can be coarse when it wants to be (it’s two friends speaking frankly and openly to one another, not a Downing Street press conference), and while there are costume changes and a decent set, it’s the storyline combined with some nuanced performances, showing strength and vulnerability in equal measure, that makes for an absorbing and appealing experience.

Polly and Marcus have been best friends since they were fourteen. They might even be soulmates. But life continues to push and pull them together and apart.

They stumble through the social chaos of their teenage years, the freedom of their twenties, the responsibilities of their thirties, and the midlife crises of their forties, navigating their relationships with each other, the outside world, and their own changing bodies.

every seven years is a new play told in seven year intervals. It asks what makes us who we are: our choices, our companions, or the very bodies we inhabit?

This isn’t the first production to go down the road of referencing a one-star review of their show (from a different publication, I hasten to add). … END_OF_DOCUMENT_TOKEN_TO_BE_REPLACED

Two sisters reunite after the death of their mother, and secrets pour forth. Robert Holman’s new play gently exhibits talented classical acting in a … END_OF_DOCUMENT_TOKEN_TO_BE_REPLACED

Everyone’s vexed in this show, though some have clearer reasons to be than others. Mrs Driscoll (Tameka Mortimer) is struggling with a home life that … END_OF_DOCUMENT_TOKEN_TO_BE_REPLACED

The penultimate production of the 2021 Tête à Tête Opera Festival, based at London’s Cockpit Theatre and showcasing contemporary and avant-garde new … END_OF_DOCUMENT_TOKEN_TO_BE_REPLACED

Relatively Speaking premiered in 1967 and is the sort of show that is, by contemporary standards, very much of its time, and not just because of … END_OF_DOCUMENT_TOKEN_TO_BE_REPLACED