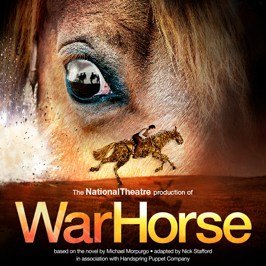 WAR HORSE is utterly extraordinary in every way ~ After seeing it again after many years I was again a blubbering mess of emotions… An exceptionally powerful, rich, raw, theatrical experience.

Many people will not have read Michael Morpurgo’s novel which was adapted by Nick Stafford and will have little idea of the story beyond the fact that it’s about horses, and one horse in particular, during the 1st World War. It is unexpectedly breath-taking and awe-inspiring to be utterly captivated by magnificent horses created from inanimate materials and turned into living, breathing, emotional, beautiful creatures by extraordinarily skilled actors. Such incredible expertise and skill makes each horse come alive ~ at least 3 actors for a single horse ~ One for the Head, One for the Heart and one for the Hind. Each part is very specific and not only do these actors bring the horses physically ‘alive’ by moving in the most intricate ways, working together to become one single horse; they also, extraordinarily, ‘breath’ as the horse, excitedly, scared, terrified, peacefully, playfully, also sniffing, baying, neighing and grunting. It is absolutely extraordinary and one can only marvel at the hours it must have taken to make it all so effortless and real, along with the immense creativity that has produced something so poignant, unique and convincing.

Another powerful element is Adrian Sutton’s tremendous and beautiful music which adds another phenomenal dimension and depth to the extraordinary visual experience: tremendous acting, deft movement and choreography, and compelling and unsettling projections that span the width of the wide stage. Simply outstanding! The music is no mere ‘fill-in’ or underscore, but individual instruments ‘voicing’ inner emotions and thoughts of horses, people and situations. It lifts and sears the heart and soul in so many ways. The immense power of orchestral sound supports the enormity and monstrosity of events, contrasted with a warm solo female voice (compelling sung by Sophie Crawford) and then the entire company singing unaccompanied, spine-tingling rich folk harmonies that lift soul and spirit!

War Horse is an incredible collaboration of skills and creativity and on the showing of the current new cast, is keeping the essence and legacy of this unique experience safe and absolutely sound. The entire company is tremendous with strong characterisations, wonderful cameos, powerful moments and no weak links whatsoever. The skills of the actor puppeteers are astounding and moving with everyone so focused on bringing the animals to life throughout. Actors equally astonishing, responding believably to ‘real’ animals. Jack Loxton as Albert Narracott and Richard Katz as Friedrich Muller take deserved individual bows at the end, both wonderful performances, but essentially this is a company triumph on every level that makes you want to shout ‘Bravo’.

It’s no surprise War Horse is still going strong 8 years after it first opened at the National Theatre in 2007. Nominations and awards won both in London and on Broadway are a testament to its theatrical genius. It is also playing in Holland, South Africa, Berlin, and will soon be seen in Australia. The memorial statues on Park Lane commemorating horses killed during the dreadfulness of WW1 are all the more compelling now as stone monuments have been completely brought to life by magnificent, life-sized puppets created by the renowned South African Handspring Puppet Company. We are drawn absolutely and completely into those 4 devastating years through the magnificent presence, heart and spirit of Joey and Topthorn.

War Horse is still one of the most important and outstanding plays in London. If you’ve seen it once you’ll want to go again and if you’ve never seen it you’re missing out on near perfection and utter inspiration. And you will cry.

War Horse: At the outbreak of World War One, Joey, young Albert’s beloved horse, is sold to the cavalry and shipped to France. He’s soon caught up in enemy fire, and fate takes him on an extraordinary odyssey, serving on both sides before finding himself alone in no man’s land. But Albert cannot forget Joey and, still not old enough to enlist, he embarks on a treacherous mission to find him and bring him home.

War Horse new cast and extends booking to 2016
At the New London Theatre, home of Michael Morpurgo’s much celebrated War Horse, the National Theatre’s acclaimed stage production is currently taking bookings for the West End production to 13th February 2016. In its eighth year, and having now been seen by over 6 million worldwide, a new cast of 26 actors and 12 puppeteers join the company on 16th March 2015 led by the show’s equine star Joey. War Horse recently completed sell-out dates in South Africa visiting Johannesburg and Cape Town and has now returned to the UK where it will complete a record-breaking national tour in Bristol next month.

Titus Andronicus is not usually a comedy, it is usually a bloody, villainous and vengeful tale, but tonight it is a comedy and a rather amusing one at … END_OF_DOCUMENT_TOKEN_TO_BE_REPLACED

This show is not without clichés - there are three of note in this production. Firstly, the French horn of the show’s title is personified, speaking … END_OF_DOCUMENT_TOKEN_TO_BE_REPLACED

There’s very little in the way of set in this show: aside from chairs, a few crash barriers and at one point, a red carpet, the actors’ movements … END_OF_DOCUMENT_TOKEN_TO_BE_REPLACED

South African born, but raised on the Isle of Man, Pierre Novellie is a true raconteur rather than just another 'stand-up' comedian. He says about his … END_OF_DOCUMENT_TOKEN_TO_BE_REPLACED

This show, Willy Hudson began by saying, is about himself. It is written by himself, is directed by himself and executive produced by himself. Almost … END_OF_DOCUMENT_TOKEN_TO_BE_REPLACED