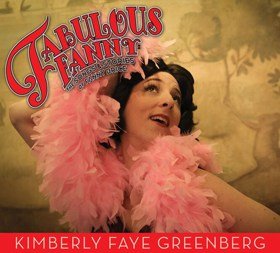 Thanks to Barbra Streisand, I know a bit about American illustrated song model, comedian, singer, theatre and film actress Fanny Brice. But I have never been that familiar with the music that made her famous, until now with the release of this lovely album Fabulous Fanny.

Over the course of twelve really well-picked tracks, singer Kimberly Faye Greenberg takes the listener through some wonderful songs associated with Fanny, starting with ‘probably her best known song, Second Hand Rose’ which she first introduced in the ‘Ziegfeld Follies of 1921’. However this isn’t just an album of tried and trusted favourites and Kimberly along with accompanist Christopher McGovern has included some tracks that haven’t been heard since they were originally recorded in the 1920s and 30s making this a great compilation of the lady’s works. So, along with my own personal favourite ‘Don’t Rain on my Parade’ there is ‘When a Woman Loves a Man’ from the 1930 film ‘Be Yourself’. Some of the songs – for example ‘Make ‘Em Laugh’ – are really just a bit of frivolous entertainment whilst others, such as the highly emotional ‘My Man’ are really deep and need to be listened to more than once to appreciate Channing Pollock’s wonderful lyrics. Then there are the, what would be considered today, politically incorrect songs such as ‘Cooking Breakfast for the one I Love’. In fact I have to admit I was pleasurably surprised at the range of song styles covered in this album.

Kimberly Faye Greenberg has a lovely voice and delivers each song clearly, often with a definite smile in her voice that conveys her own obvious love for Fanny Brice’s musical legacy. The only minor issue for me is that some of these songs – especially when matched with Kimberly’s voice – really need a full orchestra with soaring strings to fully do justice to the melody itself. However, having said that I could easily imagine sitting in a small nightclub, drink in hand, having a thoroughly enjoyable evening listening to Kimberly deliver this album live.

On Fabulous Fanny, Kimberly Faye Greenberg has done a great job at bringing to life the wonderful music of Ms Brice – and I think anyone listening to it will be surprised by the number of tracks they recognise – and ensuring that she is accessible to future generations. A lovely album that should be in everyone’s collection and played whenever you feel like you need cheering up.

This show is not without clichés - there are three of note in this production. Firstly, the French horn of the show’s title is personified, speaking … END_OF_DOCUMENT_TOKEN_TO_BE_REPLACED

There’s very little in the way of set in this show: aside from chairs, a few crash barriers and at one point, a red carpet, the actors’ movements … END_OF_DOCUMENT_TOKEN_TO_BE_REPLACED

South African born, but raised on the Isle of Man, Pierre Novellie is a true raconteur rather than just another 'stand-up' comedian. He says about his … END_OF_DOCUMENT_TOKEN_TO_BE_REPLACED

This show, Willy Hudson began by saying, is about himself. It is written by himself, is directed by himself and executive produced by himself. Almost … END_OF_DOCUMENT_TOKEN_TO_BE_REPLACED

The rough and tumble of secondary school life is not a time I recall with fondness by any stretch of the imagination – at the time, if anyone said, in … END_OF_DOCUMENT_TOKEN_TO_BE_REPLACED