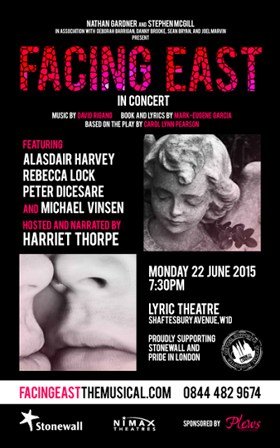 Many of us have had a good laugh over at the Prince of Wales Theatre, seeing the spectacular The Book of Mormon musical – even the producer’s notes in the programme of Facing East In Concert couldn’t help but mention it. But there is a serious side for gay Mormons who cannot simply “Find the box that’s [marked] gay / And CRUSH IT! Okay!”…

There are three options, generally speaking, that homosexuals brought up in the Mormon tradition have. They could go into a heterosexual marriage and live a lie for the rest of their days. They could remain celibate. Or shout loud, “I am what I am, I am my own special creation!” Doing that, however, means being ex-communicated from the Mormon Church, and therefore from one’s friends, family… and home. And it is not like these gay Mormons would be left alone once booted out – it is part of the ‘mission’ of the Church to “spread the Gospel”, and this will invariably include continuous attempts to convince these gay people to renounce their choice of lifestyle. A considerable number of homosexuals raised in Mormon families therefore end up, sooner or later, committing suicide.

This forms the background for Facing East, which has Andrew McCormick (Peter DiCesare), young, gay and Mormon, who practises his cello-playing with such an obsession that even his conservative religious mother Ruth (Rebecca Lock), thinks he should get out more – or get out at all. Andrew’s father Alex (Alasdair Harvey) prefers a more relaxed approach – Andrew’s a young guy, he’ll find his way, he’s bright, he knows what he’s doing, he’ll be all right.

Ruth’s uncompromising stance became quite infuriating for me, but it contrasted well with Alex’s ability to see things in context. “I love you, Andrew”, he beams at his son, a simple statement but one with a lot more poignancy and genuine parental feeling than Ruth’s diatribe about loving the sinner but hating the sin. And then there’s Marcus Williams (a very capable Michael Vinsen), or as Ruth snaps, “that man!” who made Andrew very happy, before Andrew was taken by his own hand.

I must also mention Harriet Thorpe, who introduced the evening’s proceedings (the concert was in aid of the charities Stonewall and Pride in London), played the part of the Narrator, which involved narrating all of one sentence, and then performed the splits with unexpected deftness at curtain call, just because she promised at the start that she would. Fair play to her.

And the show? Well, the music is largely subtle (occasionally too subtle – there’s no denying that there were points when certain members of the audience’s attention went elsewhere), and appropriate for the subject matter it deals with. There are no jazz hands or dancing. The show has the hallmarks of a Greek tragedy, allowing its audience to witness not so much the moment of death, but all the psychological torture and suffering that follows.

Facing East follows the emotional convention of musical theatre, where a character’s thoughts and convictions become so strong that a tune begins. Our characters do not melodramatically burst into melody, preferring a smooth transition into singing, rather like the Rodgers and Hammerstein musicals of old. It’s an emotional rollercoaster as we join Andrew in his pain at not being accepted by those he loves, and his happiness in his ‘other’ life with Marcus. Let me put it another way: if you’ve seen Billy Elliot and/or Made in Dagenham, this show has a song called ‘The Letter’ in it too…

Dealing with something like the suicide of a family member always has its complications, and this musical recognises this fully. We aren’t treated to a big, jaunty finale where everyone has come to their senses, fully forgiven whoever and whatever needed to be fully forgiven, and resolved, individually and collectively, to move on and get on with life because that’s what the deceased would have wanted. Ruth does want to talk to Marcus after all, but the curtain falls before we find out if there is even the possibility of her revising her strongly held religious views. Personally I suspect it is very difficult to reverse a lifetime of bigotry.

This concert version of an excruciating (plotwise!) if short musical left me wanting more: to see it fully staged, without actors staring down at scripts like choristers in a cathedral, and with all the passions and emotions acted out in the proper theatrical manner that this musical deserves.

This play was first put on at The Mill at Sonning in early 2010 - the world has, of course, changed significantly since then, and the script has been … END_OF_DOCUMENT_TOKEN_TO_BE_REPLACED

It’s easy to see why the Orange Tree has brought this one back for another run, less than a year after its first outing here. This is a bold, … END_OF_DOCUMENT_TOKEN_TO_BE_REPLACED

I always loved Choose Your Own Adventure books. Definitely not the Steve Jackson ones where you had to roll dice (who did that?) to find out whether … END_OF_DOCUMENT_TOKEN_TO_BE_REPLACED

Well, there’s a bit about Pablo Picasso’s (1881-1973) paintings in this show that bears his name. But it’s mostly about his approach towards women. … END_OF_DOCUMENT_TOKEN_TO_BE_REPLACED