Al (Cameron Corcoran) has managed to bring company home with him. His wife, Louise (Polly Waldron) didn’t get so much as a text message in advance of the arrival of Gemma (Aoife Boyle) and Ariel (a highly convincing Juliette Finn), a mother and daughter who have found themselves without a place to stay on account of a fire incinerating their accommodation. But, Louise points out, it’s only a small flat, and aren’t the authorities in the process of setting up emergency alternative arrangements, if they haven’t done so already? 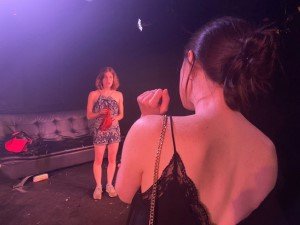 Each of the characters is multi-faceted. As Gemma observes, Louise has gone to some effort to make her and Ariel feel unwelcome. There appears, at face value, to be some classism going on, with Louise’s value judgements about her unwanted guests. There are also some evident fractures (hence the show’s title) in what might have once been a rock-solid relationship between Al and Louise, and even some therapy sessions prove to be more of a hindrance than a help. Of course, there are arguments – after all, where would the dramatic tension be if everybody got on perfectly well?

There isn’t anything that happens that isn’t interpreted, or perhaps misinterpreted, by another character, in a play that raises more questions than it answers. What is it that keeps them all under the same roof day after day when there’s so much hatred that gradually comes to the fore? How old is Ariel, really? And why does Louise start off by insisting the flat is ‘ours’ (meaning hers and Al’s) but then switches to claim sole ownership of the property?

There is scope, the show’s conclusion being what it is, for a second act (as it stands, it’s one of those one act, no interval shows). Some scathing humour permeates the narrative, and frankly stops the production from being a psychological bloodbath. The characters’ backstories are very strongly developed in such a way that explains much of the somewhat bizarre behaviour that goes on. I didn’t, in the end, warm to any of them, but in such an intricately complex plot, each person has their reasons for conducting themselves in the way in which they do, even if they don’t realise those reasons themselves.

Plot twists maintain interest in a steadily paced production. Ariel may choose to lose herself in a world of make believe, indulging in escapism, but sometimes displays more maturity than the adults in the same room. Some of the petty behaviours are recognisable, and painfully realistic – few people will not, at some point or other, have heard a remark that began at face value as a compliment but was laced with a putdown punchline. If anything, the script could benefit from being all the more explosive and confrontational – there are some deep-seated issues that remain unresolved that perhaps could have been if the air were properly cleared between the characters.

Still, some noble observations on the art of communication demonstrate that even in the digital era with ubiquitous social media and mobile telephony, there’s nothing quite like having it out face to face. Tense but compelling viewing.

After a fire burns down a high-rise block of flats, Gemma and her daughter Ariel are taken in by a young couple, Al and Louise. Pleasantries and suitable behaviour cease early, as Al and Louise vie for Gemma’s attention and try to instil their narratives on why each other are so awful. At the same time, Ariel is convinced she is a princess, and Gemma is desperate to find a safe space she can call her own after years of struggle. The warring factions create chaos as truths and secrets are exposed.

This isn’t the first production to go down the road of referencing a one-star review of their show (from a different publication, I hasten to add). … END_OF_DOCUMENT_TOKEN_TO_BE_REPLACED

Two sisters reunite after the death of their mother, and secrets pour forth. Robert Holman’s new play gently exhibits talented classical acting in a … END_OF_DOCUMENT_TOKEN_TO_BE_REPLACED

Everyone’s vexed in this show, though some have clearer reasons to be than others. Mrs Driscoll (Tameka Mortimer) is struggling with a home life that … END_OF_DOCUMENT_TOKEN_TO_BE_REPLACED

The penultimate production of the 2021 Tête à Tête Opera Festival, based at London’s Cockpit Theatre and showcasing contemporary and avant-garde new … END_OF_DOCUMENT_TOKEN_TO_BE_REPLACED

Relatively Speaking premiered in 1967 and is the sort of show that is, by contemporary standards, very much of its time, and not just because of … END_OF_DOCUMENT_TOKEN_TO_BE_REPLACED