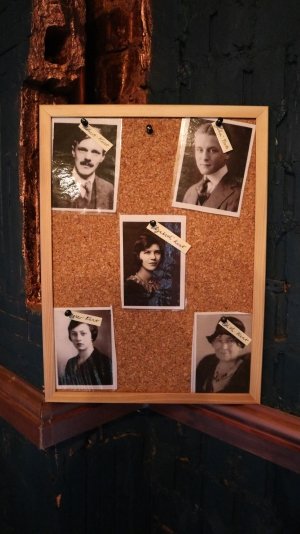 A haunted pub. A murdered bride. A family of secrets. A spooky basement. A priest and exorcism. A child’s life at stake. What’s not to love this Hallowe’entime for seekers of immersive theatre horror thrills? Flicker by COLAB delivers and then some.

It’s probably worth mentioning head-on the Covid-19 logistics. COLAB are pretty old hands these days at staging immersive theatre shows. If anyone is going to find a way to make it work, it’s going to be them. Our temperatures are taken as we enter, masks are worn, sanitiser and wipes are provided throughout. We are in ‘pods’ of two, go grab a friend (who, under Tier 2, you live with or is in your bubble, I guess) – you’ll be experiencing Flicker close together: and I’m talking physical proximity. But this isn’t a You Me Bum Bum Train solo experience. Instead, all the pods (six in total for our run, and I think that might be the limit under current rules) – have to work together to uncover and figure out clues about the gruesome 1935 murder which is casting a pall over this place and one family to this day.

Piecing together the truth and preparing for the exorcism involves searching for evidence, solving riddles, treasure hunts around the space. Then, at particular moments, Rev Parks invites us to go, one pod alone, down into the basement. The fewer spoilers about this the better, except to reassure you that a small pocket torch is provided. And a radio in case of emergency. You have been warned.

The setup works brilliantly: providing a sense of expansiveness while not losing the tautness of the acted and improvised theatrical experience. It’s not a huge show, with a limited number of actors able to be there in person. They are bolstered by voice actors, adding to the world-building. Particular praise must go to Ben Chamberlain and Lucy Ashmore, who carry the show. Also for Tasha Saxby portraying Rose Kent, bringing us up to date on the story with a video appearance which is woven into the action in a hauntingly innovative way, especially effective from where I was sitting in relation to a huge mirror.

The small cast means that much of the atmosphere and narrative relies on audience members playing their part. You’d be well-advised to come ready to participate fully and make the whole experience as terrifying as it can be.

As part of our investigation, there was a lot of information to get through. The producers would do well to simplify and reduce the number of clues where they can. It will only force audiences to work together harder if they have to rely on others picking out a vital piece of information. As it is, I remain a little uncertain about the explanation for all the twists and turns we should have put together by the end. Having questions remaining though, and red herrings still at large, by no means undermined the experience. It was fun, moving, creepy and thrilling – and highly recommended for those brave enough to face it.

Flicker pits you in a race against time and light. Join Rev. Parks once again as you step into the darkness of the unknown. A spirit haunts South London and it falls to you to solve the case and exorcise this lost soul. Murder, betrayal, and jealousy await as you delve into one family’s chaotic secrets. Partake in a seance, unravel the riddle and venture into the subterranean basement to face your fears.