A briskly-paced production, Flightpath involves a number of storylines in which the action shifts between. To break the ice, the audience is invited to – here comes that dreaded word – participate in a plot-related activity. It involved something I hadn’t personally done in at least twenty-five years, so I wasn’t very good at it, though thankfully there were enough people in the audience who were more than competent, so in the end, it didn’t really matter. I am, for obvious reasons, being candid about what is involved, though I confirm nobody in the audience is asked to get on stage. 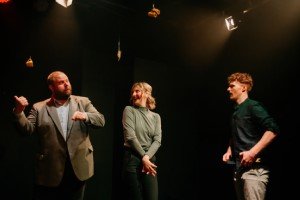 The three-strong cast (James Burke, Kelly Davie and Derek Jeck) take on at least a dozen characters between them, across different generations and locations. Invariably this involves taking on different accents, some more convincing than others – and, being a Glasgow-based theatre company, Brief Palava’s team pull off Scots accents that not only don’t go on a UK tour of their own but are comparatively better than some Scots ‘accents’ I’ve heard on West End stages over the years.

For one engineer, what comes across at face value as a linguistic challenge is eventually revealed as love-related – that is, he would have been tongue-tied regardless of his fluency in British English. I was rather impressed with the speed of the scene changes as well as the shifts into different characters, sometimes with a substantial age gap from the previous one. A seemingly banal discussion between friends on a plane soon gives way to an in-depth discussion between a journalist and what used to be his line manager about an ongoing (journalistic) investigation into the circumstances surrounding a body that fell from the sky.

The use of child characters is the source of much of the show’s humour, particularly when what they have been told by parents and teachers is taken to its logical conclusion, given the limited information supplied. It’s a clever device, as it doesn’t belittle child-like ways of thinking, but rather places the onus on the grown-ups to provide sufficient context. Davie’s grandmother figure unfortunately does one of those silly walks that no actual elderly person does, but she is at least credited with a sharp mind and having the time and inclination to speak at length about aviation to her inquisitive grandson.

The range of topics covered is broad for a single-act play, and there’s much to think about, even in the scenes that come across as little more than comedy sketches. And yet it doesn’t feel rushed. Burke’s investigative journalist character resigns in such a way that reinforces the view that employees don’t so much leave companies as managers. A would-be woman pilot is discouraged by her father from pursuing such a career, but then he struggles to articulate what she ‘should’ be doing instead. It’s relatable, I would have thought, for anyone who wasn’t supported by their family in their chosen vocation, even when what they wanted to do was entirely reasonable.

While some scenes make more sense than others, this appears to be deliberate. The production suggests that there are things about the skies that have yet to be explained. The passenger flight that disappeared in March 2014 whilst flying over the Indian Ocean isn’t directly or indirectly referenced in the show, but it’s the sort of thing that comes to mind. I felt as though the show was almost crying out for a second act, or a companion piece, in which all the things that put people off having anything to do with flying are explored – phobias, the tedium of airport security, terrible food, lack of legroom, and so on.

Interestingly, the production company’s social media suggests the team took a train down from Scotland to London rather than a flight. If a show about planes could be as riveting as this one, one about the railways could prove equally surprisingly intriguing, and definitely just as chaotic. As for this show, it’s a delightful romp through different viewpoints on planes and flying – a lively and spirited journey.

Flightpath: A Surreal Comedy about Things Falling from Planes
A man, a plane, a cadaver: pandemonium!
High above the earth, where hunks of metal soar on invisible winds, the very fabric of reality breaks down… When an unidentified body falls impossibly fast from a plane which never existed, one journalist – determined to make sense of it all – resolves to take up the case.

When what he finds goes deeper than a single story could, he quickly finds himself picking battle lines in a fight between reason and madness. Stitching up a story from loosely related scenes, Flightpath weaves a tapestry of craziness which might just make sense of the spinning world we live in.
Brace yourselves for this colourful comedy about humanity’s fascination with the skies.

It is 2002 – another Royal Jubilee year, and HRH (Mary Roscoe) is due to open a new Science wing in a 'sink' comprehensive where Dr Derek Jones … END_OF_DOCUMENT_TOKEN_TO_BE_REPLACED

Dr Anna LaRosa (Dr Stefania Licari) has a lot to say. Just as well, as she’s the only one on stage in this medical comedy, which largely draws its … END_OF_DOCUMENT_TOKEN_TO_BE_REPLACED

Nikhil Parmar’s one-man show, originally written as a TV pilot, manages to touch on a wide range of themes from Islamophobia to modern fatherhood with … END_OF_DOCUMENT_TOKEN_TO_BE_REPLACED

Handel’s 1738 opera Serse (or Xerxes) is an exploration of power, love and human frailty. King Serse falls in love with the voice of his brother … END_OF_DOCUMENT_TOKEN_TO_BE_REPLACED

Lea Salonga has her fans. She also has some superfans, the ones who yell, “I love you Lea!” at almost every opportunity. If that wasn’t enough, there … END_OF_DOCUMENT_TOKEN_TO_BE_REPLACED