Encounters with technology in everyday life are becoming increasingly common – I visited a branch of a chain of a fast-food restaurant recently and was told I couldn’t order at the till, even though they had one (two, in fact) right here, but I had to double-back on myself and use one of several self-service machines instead. I wondered what the future for such places would be like: is there a way of having zero interaction with staff whatsoever, such that I would receive my order through an automated dispenser facility of some kind? Perhaps in Yann Norton’s (Hannah Lydon) thinking, it’s entirely possible. 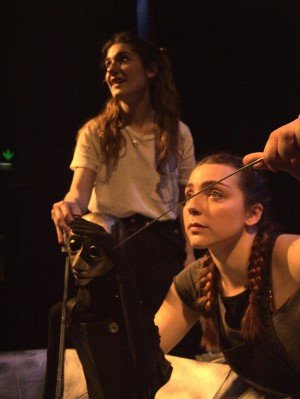 Or, to take another example, a visit to a branch of Tesco Express to pick up a few items. I pick up the items I want from the shelves, and I pay for them using a self-service counter, even though there isn’t a discount or any extra incentive for not going using a manned till instead. As the machine’s voice cheerily tells me, “Thank you for shopping at Tesco”, I walk out of there, having spoken to precisely nobody.

So it is in the world of Foundations – entire moments go by when nobody says anything. Aside from being somewhat refreshing when attending a performing arts festival with so many shows that are either stand-up comedy or plays that try to cram in as much material as possible within an hour, and therefore come across as very wordy, it’s indicative of the factory work that MJ (Charlie Culley), as she likes to be known, does purely for the money. Then again, as it’s pointed out to her, a factory by default is going to be filled with the sound of machinery rather than the sound of people in conversation.

People who have done stints stacking shelves in supermarkets, a broadly similar role to MJ’s in terms of its sheer repetitiveness, have said to me it isn’t something they would want to do for the rest of their working lives, if only because those who have made a career out of it are rather like the non-communicative, zombie-like beings in this show. The production is not, I hasten to add, seeking to belittle such people, but simply to emphasise that life doesn’t have to be quite so dreary all the time.

An ongoing experiment is underway in which robots have been created – unlike human workers, they do not require extra pay for overtime (being robots, of course, they don’t require payment at all) and aren’t, to take an example not used in the play, going to resort to industrial action if the company is unable or unwilling, or both, to satisfy pay rise demands. But their creator, whose identity is revealed before the end of the play but is kept under wraps for so long I feel obliged to do the same, has gone several steps further than merely programming machinery to perform certain tasks.

It doesn’t quite go as far as the motion picture Bicentennial Man, but there are, eventually, similar sentiments. MJ has had to explain to Pins (Olivia Swain), as she has called one of the robots, all sorts of human emotions. Bolts (Rory Gee) completes the set of on-stage characters, the studious lead archivist of the factory, and also a robot, hence his name: he discovers feelings and emotions through reading books. There is a lot to think about in this show, which includes some impressive physical theatre, but it never feels exhausting. The takeaway message appears to be, ‘Respect the robots, and the robots will respect you.’ And then we come full circle, from substituting humans for robots to substituting robots for humans – respect fellow humans, and fellow humans will respect you. If only real life were as simple as that. In the end, this is such a thoughtful and insightful show.

Following a sell-out performance at New Wimbledon Studio as part of their From the Fringe Season, Foundations is delighted to be heading to Underbelly Cowgate as part of the Edinburgh Fringe Festival from the 4th to 21st of August. Foundations is a devised family production which tackles the question of what it means to be human in an age of technology, featuring an originally composed soundtrack, physical theatre, and bespoke puppets.

Harold Shipman, known to his many patients, family and friends as ‘Fred’, was Britain’s worst serial killer. The official inquiry into his crimes … END_OF_DOCUMENT_TOKEN_TO_BE_REPLACED

Being one of Arthur Miller’s best-made and most challenging plays, The Crucible is also one of his most frequently performed. I was going to say … END_OF_DOCUMENT_TOKEN_TO_BE_REPLACED

To be fair, Linda Lavin called her concert Love Notes, there’s an album of the same name, and that’s more or less what it was about - variations on … END_OF_DOCUMENT_TOKEN_TO_BE_REPLACED

Noughts & Crosses is a euphemism for blacks and whites. The Noughts are the whites and the Crosses are the blacks. In the world of the play, the … END_OF_DOCUMENT_TOKEN_TO_BE_REPLACED

This ‘juke box’ musical offers highly polished, undemanding, feel-good entertainment, showcasing, as it does, 30 songs dating from the 1960s to the … END_OF_DOCUMENT_TOKEN_TO_BE_REPLACED