Home » Reviews » FOX-LIGHT by Barnaby Tobias at The Hope Theatre

The descriptions of what happens in this show are so vivid that paradoxically they leave nothing to the imagination – and, at least at the performance I attended, more effort was expended by members of the audience on keeping relatively cool thanks to the theatre’s supplies of handheld fans in a very warm performance space than on working out what was going on in a production with little in the way of set and props. 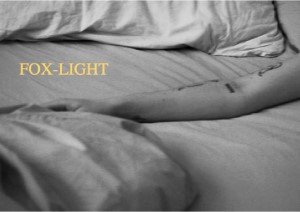 An uncluttered stage, mind you, allowed for swift scene changes. Jay (Barnaby Tobias) meets Tess (Martina Rossi), or, in his (not so) humble opinion, he conquers her, the latest in a series of wins for this alpha male (as defined by the Urban Dictionary), oozing with misogyny and being gloriously inappropriate in as many ways as possible. Tess, meanwhile, is hardly a likeable character either, almost always finding something to find displeasure in. Eventually, even bedroom activity with Jay becomes something she stops wanting. She’s too much of a snob to appreciate very much in life, and a very late scene in which she, rather unconvincingly, agrees to join Jay in celebrating some good news, hardly compensates for all the complaining that came before.

It’s difficult, therefore, to have much, if any, sympathy with either of them, even if starkly different perspectives of events are somewhat amusing. There’s more talk of poets and poetry than there is about painters and painting, which seemed a little odd, and ultimately, a love triangle story is hardly ground-breaking material. There might also be a bit too much in the way of exposition. With both characters taking it in turns to address the audience, it’s a while before they address one another, and by then, a distancing effect has become so established that any intimacy feels artificial.

In a world that increasingly takes offence at almost anything, a play with a script loaded with thoughts that are, at face value, bizarre and horrifying, is an intriguing – and edgy – artistic choice, although the shock factor is reduced with every description of absurdity. As the story goes on, Jay’s initial bravado and seemingly carefree outlook gives way to something broodier and almost impenetrably deep, and it wasn’t clear to me how or why this shift came about.

When their relationship, if it can be called that, goes stale, the play almost does the same, or perhaps it feels that way because the first half of the show was briskly paced, and overall, the production came across as one of those shows that couldn’t sustain its initial strong momentum and crawls to the finish line. As the acerbic wit, on both sides, is replaced with reflections quite literally drawn from others, it’s frankly more than a little difficult to maintain interest.

When two painters meet under a moonlit sky, poetry, cigarettes and sex isn’t all they share. Fox-Light tells the tale of young lovers infatuated with each other’s beauty, charm and genitals. In an age where facades are clung onto for dear life, Jay and Tess must break through the masks of society in order to see what lies beneath. Dissolving into the essence of their own souls and moving closer to the truth, the romance turns sinister as the very thing they hold onto, could be the very thing that sets them free.

A rapid switch of Alex Roberts’ baseball cap from back to front, together with an appropriate change of pitch and accent, are all that is required for … END_OF_DOCUMENT_TOKEN_TO_BE_REPLACED

It’s a sad tale, as the audience is duly informed at the start of the show, but before it reaches the point of melancholy and woe, there are a lot of … END_OF_DOCUMENT_TOKEN_TO_BE_REPLACED

There is nothing in Lucy Porter’s show, or so Porter herself asserts, for the younger generation: it is all about her mid-life crisis and what she did … END_OF_DOCUMENT_TOKEN_TO_BE_REPLACED