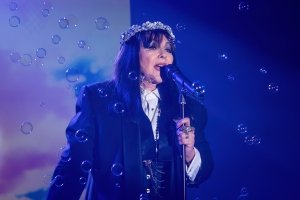 There are good plays; there are inspirational dramas; and there are out-of-body experiences; Musik, the one-person show performed with explosive panache by Frances Barber, falls, very definitely, into the third of these categories. If you were looking for a definition of how a mind gets blown then it’s right here, right now in this extraordinary show at The Leicester Square Theatre.

The script is by Jonathan Harvey and it’s steeped in delectable debauchery; the music is by Pet Shop Boys and as usual, they hit upon that clever mix of contemporary nostalgia, a fresh familiarity that makes nerve-endings throb
and endorphins whizz about like mad semi-quavers playing havoc inside your sensory processing regimen.

And riding this bucking bronco is crazy bitch Billie who threatens each and every member of the audience with her wise-cracking, drug-fuelled rant-of-consciousness, daring us not to listen, not to be mesmerised, not to believe in her parallel universe of sex, drugs and risqué LOLs. Barber bestrides the stage like a libertine colossus giving every last drop of inspired perspiration in the cause of her art. She pouts and whimpers; she shouts and preens; she struts and shrieks: Barber is immense. And she channels the Billie Trix character to knowingly prod our bereft and barefoot souls.

We are given a non-stop, seventy-five-minute tirade of pure, adulterated, high-class smut interspersed with a variety of numbers ranging from the wonderful, tongue-in-cheek, Warhol-inspired spoof about Soup – “it won’t let
you down”; through the emotional Billie Trix theme tune Friendly Fire – from the original show Closer To Heaven in which Billie Trix was first unleashed on an unsuspecting world; to the disco-heavy bopper Ice Bin Musik which Barber delivers with unalloyed pulsating gusto.

Barber, I’m certain, is a wonderful professional but when you let loose Billy Trix in all her gory, drug-fuelled fury then director Josh Seymour really has a task on his hands: the result, though, is a superlative job. Barber’s movement, which fluctuates from balletic twirls to uncompromising belly flops, deserves great credit via choreographer Anthony Whiteman for coaxing and controlling a runaway ego-tripper. Unlike Trix, who refers to the “Ly – sester” Square theatre as “a community centre” I love the venue – with its spacious, comfortable seating and twin bars in the auditorium giving an authentic floor-show feel to what is essentially a cabaret and David Plater’s lighting design complements this and adds a touch of Pet Shop Boys arena tour disco feel at appropriate moments. Billie’s story is accompanied throughout with full stage projections – another Pet Shop Boys tour prerequisite – and the Zelig-inspired nature of these adds to the dark humour of the piece; and a few simple props, including a bubble-blowing gun (want one), an Andy Warhol doll, a bottle of Jack Daniels and a tambourine/coke-snorting-surface-for-the-use-of, with Billie regaling us from a high stool at a bistro table, all render Lee Newby’s design simple and effective.

Sound is essential in this type of show and high praise is due to Fergus O’Hare for the superior quality of his sound design – not always a notable feature on the London stage: Barber comes across as clear as a bell either when talking through her guttural germanic accent or in her sleazy, gravelly-toned songs and with a show laden with asides she never misses a beat and we don’t miss a word.

In the end, though, Harvey’s sharp, laugh-a-minute script, Neil Tennant’s enthralling lyrics and Chris Lowe’s exquisite music all depend entirely on delivery. Billy Trix gives us a stand-up routine-on-speed that is forceful, challenging and fully meta-showbiz with a rare spine-tingling intensity. Barber is a phenomenon: go see but make sure you check your inhibitions at the door.

‘MUSIK’ by writer Jonathan Harvey and Pet Shop Boys Neil Tennant and Chris Lowe is to get a four-week London run following its critically acclaimed sold-out world premiere at the Edinburgh Fringe.

A 60-minute, one-woman show, multi-award-winning actress Frances Barber reprises her role as Billie Trix from the 2001 musical, ‘Closer to Heaven’.

Billie Trix. Icon. Rock star. Screen goddess. Drug addict. Billie has lived a life of excess and shares it all in her new one-woman show. Her journey takes us from post-war Berlin to the rock arenas of the world, via the Vietnam war, Andy Warhol’s Factory, and a year in a Soho Square phone box. A stunning performance by Frances Barber as Billie Trix with an outrageous script by Jonathan Harvey (Beautiful Thing, Coronation Street) and six original songs by Pet Shop Boys.