Fair play to the Fresh Life Theatre Company for managing to put on a show on the same evening as a major football fixture – I once had the privilege of turning up to a play one evening in the summer of 2018 to be met by an apologetic producer who said their audience turnout was expected to be so low, they had called the performance off and had decided to head into the bar upstairs to watch England play against Croatia in the World Cup. (My match review was thus: “A riveting performance which held the audience captivated from beginning to end, but the cast could not, despite their best efforts, meet the extremely high standards the production demanded of them. Nice costumes, though: loved that waistcoat.”) 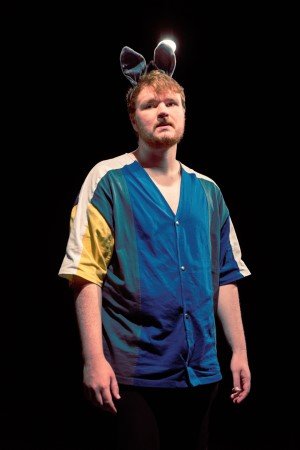 Anyway, Nick Bottom (Charlie Day), complete with donkey ears – you know, the character in A Midsummer Night’s Dream – is flying solo tonight, with the other actors otherwise engaged. This, then, is Bottom’s opportunity to present his own show, and he wants it to be something of a celebration. He goes to some lengths to try to achieve this, working the audience up like the warm-up man at a television studio recording. There are even disco lights and a dance routine.

What starts off as bravado, perhaps even borderline narcissism, gradually gives way to a display of vulnerability and a facing up to the challenges of life. Bottom’s drive to entertain people is commensurate with a profound thought, attributed to Robin Williams (1951-2014), “I think the saddest people always try their hardest to make people happy because they know what it’s like to feel absolutely worthless and they don’t want anyone else to feel like that”. He expresses heartbreak through song (better to have loved and lost and all that), and becomes philosophical in places, such as when he ponders on the very meaning of happiness, and whether it is something that can ever be fully achieved.

There’s some reticence on Bottom’s part as he struggles to articulate his line of thinking. It’s a convincing performance, and although there were moments when, frankly, I hadn’t a clue what was going on, this seemed deliberate, indicative of an intelligent brain running at full speed but not quite managing to structure thoughts and opinions in an easily accessible way. In the complexity of this ultimately very human character, however, there’s a person simply striving to do the best they can.

There are some laughs along the journey, and despite the character being thoroughly dislikeable to begin with (at least to me), it later becomes apparent that one can always do better than to judge a book by its cover. The usual elements of an energetic one-man show are there – multiple voices and characters, direct addresses to the audience that help maintain interest, the occasional stumbling over words because everything’s happening at almost breakneck pace.

In some ways, it’s the sort of show that would work well in a late-night slot at the Edinburgh Festival Fringe, if only to get the kind of people attending who like to have a good time but who would also benefit from subtle messages about mental wellbeing. Pensive, preposterous and perceptive in equal measure.

Bottom has spent his life pushing the people closest to him away, so it makes sense for him to perform a socially distanced show. Combining the masterful wit and language of the Bard with fast-paced, sensitive new-writing, Charlie Day has created a production that has something for everyone. Bottom has been left to put a play on all by himself. Watch as he battles his demons, all in an effort to…make you like him.

When Bottom arrives at the theatre, ready to perform, and finds the rest of his cast have left him, he needs to improvise. Dealing with the trauma of pushing his friends away and attempting to give the audience a good night, is a cocktail for trouble. As his plan falls apart, he is forced to come to terms with who he is.

There are usually, broadly speaking, two large demographics of patrons at a family show like The Wizard of Oz – children and their responsible … END_OF_DOCUMENT_TOKEN_TO_BE_REPLACED

This production makes excellent use of the available stage space - and, rather like the big musicals at Chichester Festival Theatre, has its cast … END_OF_DOCUMENT_TOKEN_TO_BE_REPLACED

This is an enjoyable and dynamic production of Henry V at the Sam Wanamaker Playhouse. Does it matter that there is innovative action and that it is … END_OF_DOCUMENT_TOKEN_TO_BE_REPLACED

With so many versions of A Christmas Carol doing the rounds (well, it is that time of year), it takes something pretty substantial to stand out from … END_OF_DOCUMENT_TOKEN_TO_BE_REPLACED