Home » Reviews » Game Night at The Hen and Chickens Theatre 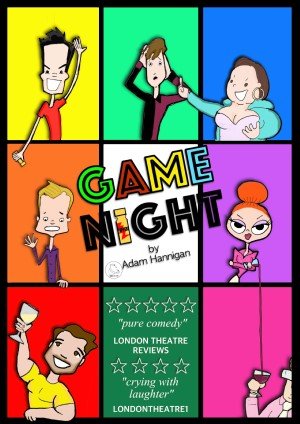 In his book To kill a Mockingbird Harper Lee gave the world one of the most used quotes of all time “You can choose your friends but you sho’ can’t choose your family.” While this is often misquoted, it is still a profound insight into human relationships. And relationships between friends and family are centre stage in Ear to Ear productions’ Game Night which was recently on in Islington’s Hen & Chickens Theatre.

This Friday is an auspicious night for Michael (Adam Hannigan). Not only are his best friends coming round for their regular Game Night, but he is going to surprise them all by announcing his engagement. As fiancé Jacob (James Sinclair) points out, Michael should be announcing their engagement, but they both know that when the big moment comes, it will be solely centred around Michael, which is why he wants everything to be absolutely perfect. However, the best-laid plans and all that and, as the first guests arrive – husband and wife Tom (Jimmy Jameson) and Kate (Amelie Rose) – having what appears to be a blazing row over their sex lives, Michael realises things are not going exactly according to plan. Then, when Rory (Ryan McGonagle) comes in, frozen and covered in snow, and Max phones to say he can’t make it, Michael’s plans seem to be falling apart at the seams. Jacob manages to reassure him that the night will be a success with the announcement.

Unfortunately, Jacob forgets to mention that he has invited his sister – and Michael’s arch-nemesis – Claire (Tiffany Robinson) who turns up bearing gifts in the form of handsome Shane (James Colebrook). Things are not looking good for Michael’s big news, but everyone’s here now so what more could possibly go wrong?

Sometimes, this reviewing lark is an absolute pleasure. I get a front-row seat at a performance where everything is right, then get to sing its praises in print. And Game Night is just such a show. I first saw it back in 2018, and Writer Adam Hannigan has made some tweaks, including some nicely updated references, that have elevated the script so much. The story itself is a nice mix of comedy and farce that, when you analyse it, has some pretty heavy themes to it. Communication, trust, fidelity, and loyalty are all in there. Initially, I did wonder why Michael and Jacob were together, they felt like polar opposite, but as the play develops, you realise that, in fact, these two are not only made for each other but have the perfect symbiotic and loving relationship, and I ended up being jealous that they had achieved something I never will.

The cast of characters are not only nicely drawn but, the reality is, we all know these people from our own lives. Everyone knows a Rory for example. As my friend Michael succinctly put it “Rory would be nightmare on an evening out, but he would the reason the night out occurred”. Then there’s Claire who is fiercely protective of her brother but often goes about things the wrong way – and with, I hope, some of the tallest stories ever heard. As for Michael, well I’m afraid there was a lot of me in that particular character. Every character is finely drawn and believable and crying out for a first-rate cast to bring them to life.

And that is what we have here. Seven highly talented actors really throw themselves, at times physically into their character. There are some wonderfully gentle moments in the performance that speak a thousand words. For example, when Jimmy Jameson’s highly inebriated Tom tries to reach out to Kate. Amelie Rose’s reactions and movements are superb, gently removing his hand with a look that says so much about how she is feeling at that point. I could write about every actor’s performance and the nuanced and skilful way they animate their character, but there are only so many superlatives in the English language. Did I have a favourite performance? No, but I am going to mention Ryan McGonagle as Rory. Ok, I admit it, this was the favourite character for both me and my companions. Rory could actually be a very irritating person. His shameless flirting, oh let’s face it throwing himself at Shane (not that I blame him) could, in the era of #MeToo, be seen as too predatory, but Ryan’s cheeky smile and perfect comic timing, stop Rory from being a creep and instead make him that sex-obsessed, but in a likeable way, friend we all have or had at one time. He also really knows how to host a game of Twister.

Was there anything about Game Night I didn’t like? Well no. The runtime of around 75 minutes felt right, and the set and costumes worked well both visually and for the characters. This was a laugh out loud, beautifully written, acted and produced show that suggests Ear to Ear productions have a long and successful career ahead of them.

One night. One big announcement. One drink too many and more fights than there are positions in the Kama Sutra.
Ear to Ear Productions is a company that writes, directs and produces their own unique and original work. Our core ethos is about spreading laughter and celebrating the diversity of the LGBTQ+ community, tackling themes of self-
acceptance and sexuality with adult (and often dark and provocative) humour.

It’s a snowy winter evening in London and Michael has invited his closest friends over for a thoroughly planned out games night to announce the news of his engagement to Fiancé Jacob. But with his eccentric and trouble-riddled friends arriving and spiteful relatives crashing, it doesn’t exactly go to plan.
Trapped in a house together, more alcohol being drunk and more secrets revealed, will Michael and Jacob make it down the aisle?

If the audience were to be exposed to full versions of the seventy-four songs listed in the programme, it would be a very long show indeed. I suppose … END_OF_DOCUMENT_TOKEN_TO_BE_REPLACED

How can a play be both charming and devastating? Through its tight script, abundant humour and pitch-perfect performances, 4th Country manages to … END_OF_DOCUMENT_TOKEN_TO_BE_REPLACED

Britain, so a London cab driver once told me, is obsessed with the Second World War, as though it happened just recently. Power Luncheon would seem, … END_OF_DOCUMENT_TOKEN_TO_BE_REPLACED