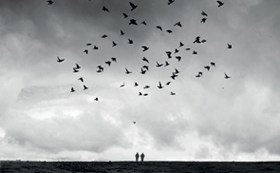 The Orange Tree Theatre in Richmond has a justified reputation for reviving forgotten classics and often mining gold. Together with “Up in Arms”, a touring company based in the South West of England whose mission is “Honest, human, affecting, revealing: we make plays about people and the places they’re from”, they have revived Robert Holman’s German Skerries – not performed since 1977.

The play is set in Teesside in the long hot summer of 1976 which was a period of relative calm before the storm that was to break politically in 1979. At the end of the second scene twenty-three year old newly married Carol looks across the Tees and sees “The lights o’Redcar. British Steel. ICI Wilton.

Middlesbrough. The docks. Warners Chimney. Teesport refinery. The Transporter. ICI Billingham…” These industries are now all gone – notably the Steel Works which finally closed at the end of 2015. Maybe that is why it was thought timely to revive the play?

This is a play about ordinary people. A young married couple, Jack and Carol, full of the joy of each other. An ageing primary school teacher, Martin, for whom birdwatching is clearly an escape from a mundane job and a boring marriage. Michael, a cynical but successful ex-maritime Pilot now skilled man-of-all trades serving the ICI and other works which operate along the Tees estuary. But despite his success he is unhappy – “My clock’s still ticking but that’s about it”.

We open with a long dialogue between Jack and Martin who meet for the first time on the premises of the “Teesside Bird Club” at a point that is ideal for watching seabirds, especially on the distant rocks called the German Skerries. Their chat is inconsequential even banal. I wondered for a while whether we were in Pinter or Beckett territory where under a strange conversation there is mystery.

But this is not “Godot” or “The Caretaker” – there is no mystery, just mundanity. They talk about birds, holidays “Salcombe is a lovely spot” in the way that real people do. There is no artifice here – we are eavesdropping on life at its most commonplace.

When Michael arrives we see someone who is reluctantly upwardly mobile “We’re in the process of buying Lucy a pony” but in a clearly deeply unhappy marriage “There are times when our marriage leaves little time for anything else. We both need to hang on to it – for the children’s sake as well as our own…”

The then industrial ubiquity of the area is a constant as well as the then norms of employment, particularly the role of the Unions. Jack, who works at ICI, says “… we’ve got a good Union man – he ain’t been bribed yet. ‘Half the shop stewards have bloody posh houses. ICI were trying to lay men off our shift… The Unions wouldn’t let ‘em, thank God.” Well all of this was to change as with hindsight we now know. But for the Author to hint that change was around the corner when he wrote the play in 1977 was remarkably prescient!

If today change is a constant forty years ago that wasn’t necessarily so. Martin’s life seems never to have changed once the sacrifices his poor parents made bore fruit when he became a teacher. And he describes himself as a “…common-or-garden me” when his white collar job suggests to Jack that he might be a “snob”. Even the young couple are limited in their ambitions and seek no changes – though in that social stratification that is peculiarly English it is clear that Carol’s family is a small cut above Jack’s (and that her white collar job is a cut above his unskilled one) – and that that is a source of some tension between her parents and him! Jack needs to get a promotion but to do this he needs to go on a technical course and he can’t do this without getting some “O” levels.

The dramatic shift in the play comes when an industrial accident at British Steel brings a badly injured Michael, who was working there when a pipe exploded, to the birdwatching spot and to Jack and Carol. They help him and Carol takes him to hospital. This shock, traumatic though it turns out to be, is curiously undisruptive and when in the final scene they meet up again with Martin the conversation returns to the minor key on which the play had begun.

Robert Holman has an almost Alan Bennett like skill in writing dialogue as people really speak it – perhaps he also carries a little notebook with him and jots down conversational snippets! German Skerries is not a comedy though; it is a slice of life drama which perhaps owes more to Wesker and Osborne than it does to Pinter or Beckett. And quite a lot as well to the early “Soaps” – Coronation Street or The Archers in the era before it wasn’t necessary for every episode to end with a cliff-hanger! It is a strangely discomforting play seen forty years on – not least because it depicts a simpler and apparently more secure life which, in fact, was soon to be much less secure. Perhaps the accident to Michael is a metaphor for that as is the sense that the “I know my place” bias and strict rigidity of social structure is seen having a last gasp.

The performances are all very good – it cannot be easy to play “ordinary people” in “ordinary situations” and this cast does it with understated but consummate skill.

A friendship, a marriage, a holiday, a death – German Skerries fills the stage with the meetings and departures that make us human.

It’s 1977, and Martin, Jack, Michael and Carol are staring out into the future. Around a popular birdwatching spot overlooking the mouth of the Tees, their lives intertwine to create an uplifting portrait of human hope and vulnerability.

The first major revival of this richly resonant drama which won renowned playwright Robert Holman the George Devine Award. His incredible career spans four decades including the plays Making Noise Quietly, Across Oka and the recent A Breakfast of Eels (Off West End Award for Best New Play).

Produced with the award-winning Up In Arms, a touring theatre company led by director Alice Hamilton and writer Barney Norris. Their productions of Norris’ plays Visitors and Eventide received critical acclaim at the Arcola, Bush Theatre and on tour, picking up nine Off West End Award nominations between them.

Running time 1 hour 30 minutes (no interval)
An Orange Tree Theatre and Up in Arms co-production, in association with Reading Rep

It wasn’t that long ago when anyone who gave warnings about Sleeping Beauty would be dismissed as more than a little ridiculous. The concern is that … END_OF_DOCUMENT_TOKEN_TO_BE_REPLACED

Alby hates themself, but can't work out why, and that irks them, even if they don't quite realise it. In this witty, occasionally unsubtle, but … END_OF_DOCUMENT_TOKEN_TO_BE_REPLACED

I have seen some outstanding acting recently at the intimate Finborough Theatre, and this new play is no exception. The highly talented cast quickly … END_OF_DOCUMENT_TOKEN_TO_BE_REPLACED

In the pandemic (remember that?) I worked in adult social care. My role was to help older people in their own homes with daily tasks - I’d cook meals, … END_OF_DOCUMENT_TOKEN_TO_BE_REPLACED