Advertised as ‘an evening of camp laughs, filthy looks, and all the usual shiny shit you’ve come to expect’, Ginger Johnson’s Christmas Egg manages to firmly under-sell itself. There’s very little ‘usual’ to be found in this impressive array of off-beat acts, the filthy looks expand into filthy comments and filthy jokes, and the laughs are plentiful and far-ranging from camp to full belly. 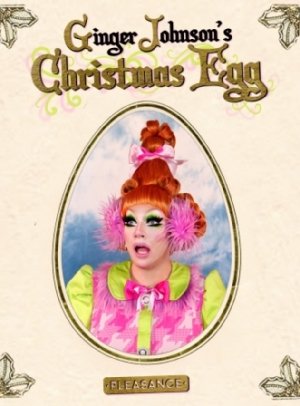 Even if this year hadn’t been woefully lacking in laughs, Ginger Johnson’s acerbic wit is a welcome relief from everything in the outside world with lines like “At least when you’re being murdered there’s someone to hear you cry” and her unrepentant heckling of any audience member who dares to interrupt or talk through performances.

Ginger is as engaging and entertaining as you could hope for and skillfully keeps both the audience and her guests in line while also keeping momentum, engagement, and time without overshadowing her fellow performers and giving each of them time to make their mark.

With acts ranging from straight-up musical performance and lip-syncing, through to interesting facts about numbers and shocking illusions, there is a smattering of traditional variety show feel to the evening and having most acts accompanied by talented and unflappable pianist Sarah adds a great deal to this.

Naturally, not everything on the lineup is likely to be for everyone but the mix is broad enough that it would be a surprise to find anyone who didn’t find something to enjoy and there is a delicate balance between over-the-top comedy and serious performance that worked really well for me and kept the evening feeling fresh (even though I never want to hear about the Christmas Egg again if I can help it).

As advertised, there is indeed a lot that’s shiny in Pleasance’s Christmas Cabaret and while arguably some of it could do with a bit of extra polish here and there to bring things up to full gleam, Ginger Johnson and team aren’t playing it safe and the reward for that far surpasses the occasional slightly shonky segue or lost line in a song.

A Covid-driven alternative offering to Ginger’s standard Christmas fare it may be, but Ginger Johnson’s Christmas Egg kicks off The Pleasance Theatre’s Queer Cabaret Collective takeover with quite a bang.

Join Newcastle’s sweetheart and some of her most ridiculous cabaret pals for an evening of camp laughs, filthy looks, and all the usual shiny shit you’ve come to expect from Pleasance’s own Christmas tree angel, Ginger Johnson.

From the same tiny mind that brought you How to Catch a Krampus and Escape from Planet Trash, Miss Rona may have put pay to her usual festive offering but that won’t stop Ginger from squeezing her lockdown paunch into 4 pairs of dance tights and making an idiot of herself in the name of entertainment.

“The times they are a-changin'”, as Bob Dylan put it - and as a deceased woman’s grandson (Phillip Jones) returns home to attend the funeral, the … END_OF_DOCUMENT_TOKEN_TO_BE_REPLACED

It’s not often that the entertainment tastes of an intellectually snobby middle-aged woman and an action-mad 10-year-old boy align perfectly, but … END_OF_DOCUMENT_TOKEN_TO_BE_REPLACED

Notre Dame is the latest digital production by Threedumb Theatre, live-streamed from The Space in Canary Wharf, London and directed by Stephen Smith, … END_OF_DOCUMENT_TOKEN_TO_BE_REPLACED

Icarus has fallen, and Minos has her dead to rights in an open-shut court case, but perhaps another story might be found. An interesting premise, an … END_OF_DOCUMENT_TOKEN_TO_BE_REPLACED

The latest production at the intimate Finborough Theatre boasts a visually striking set designed by Sarah Beaton on a traverse stage, with the … END_OF_DOCUMENT_TOKEN_TO_BE_REPLACED