It’s the sort of bittersweet tale that’s been bandied about before, and no doubt will crop up again sometime. Arnold (David Vale) waxes lyrical about the various changes that have happened over the decades since he and his wife Claire moved into their property, somewhere in the north of England, in 1962. I wasn’t around then, but I’m just about old enough to remember a time when it didn’t really matter if the back door was double-locked or not at night, and one certainly wouldn’t bother getting back out of bed just to be on the safe side. 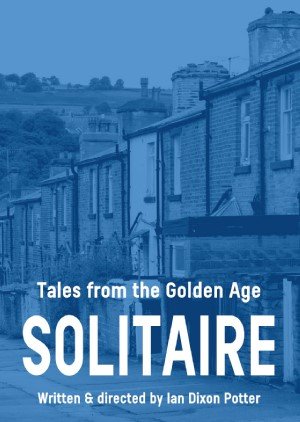 The good thing about a monologue of this nature is that it is relatable to anyone who has been around to recall the days when, as Arnold puts it, the only sort of tablet worth knowing about is the kind you get on prescription. Arnold can come across at times as a bit of a moaner, almost pining for a return to the kind of ‘attitudes’ (his choice of word) he was brought up with. It wasn’t so long ago, for instance, when there were only two genders, and therefore people’s pronouns could be assumed without risk of offence, more people went to church at least occasionally than didn’t, and there weren’t quite so many betting shops and fried chicken outlets on the high street.

It is somewhat easier to sympathise with Arnold when he talks about his friends and neighbours who, one way or another, have departed, and indeed one of the most difficult aspects of being of pensionable age is that, after a while, one’s relatives, contacts and acquaintances come to the end of their own lives. There are personal stories, too: Arnold doesn’t exactly enjoy the most comfortable of relationships with his son, apparently due to them having very different political ideologies.

Engagingly delivered, the play covers a huge amount of ground in a short space of time but doesn’t quite penetrate as deeply as it could to explore some of the issues brought up. The brief overview of a topic, for instance, a sense of local community that used to exist in Arnold’s immediate vicinity, ends with a sorrowful, “All gone, all gone”, a conclusion repeated with other recollections. But what he hasn’t lost (at least, not yet) are the memories of everything ‘all gone’, which begs the question – is it really ‘all gone’?

It’s quite a perceptive play, when it wants to be. Arnold decries the younger generations who pay little, if any, attention to television content, choosing instead to get their entertainment from social media platforms. But then he recalls his own childhood in which his family didn’t even have a television – and if his generation managed without it, then so can others. As ever with single perspective narratives, one wonders how the people Arnold mentions would respond to what he talks about. Overall, it’s a broad and brief but nonetheless pleasant experience.

There’s a notion that it’s desperately sad when your halcyon days come to an end. When you go into decline and you gradually lose everyone you ever cared for and all the things which brought you happiness. But at least Arnold had all this at one point in his life. It doesn’t matter when. It doesn’t matter that it eventually comes to an end. Nothing last forever.

It’s an intricate plot, laced with some subversive humour - that the female character is simply called ‘The Woman’ (Molly Lynch), for instance, is … END_OF_DOCUMENT_TOKEN_TO_BE_REPLACED

Andrea McArdle didn’t, when the 1978 movie Rainbow was released, look or sound like Judy Garland, and she still doesn’t. You’d be forgiven for … END_OF_DOCUMENT_TOKEN_TO_BE_REPLACED

TENNIS ELBOW is the first play that John Byrne has written for thirteen years, and is in fact a companion piece to his critically successful Writer’s … END_OF_DOCUMENT_TOKEN_TO_BE_REPLACED

It’s all a bit banal, really - or perhaps I’m too heavily influenced by some of the other online productions that I’ve seen recently, which deal with … END_OF_DOCUMENT_TOKEN_TO_BE_REPLACED

Mandy Gonzalez is one of those Broadway actresses with a number of dedicated fans and followers, and it’s easy to see why given her sunny disposition … END_OF_DOCUMENT_TOKEN_TO_BE_REPLACED